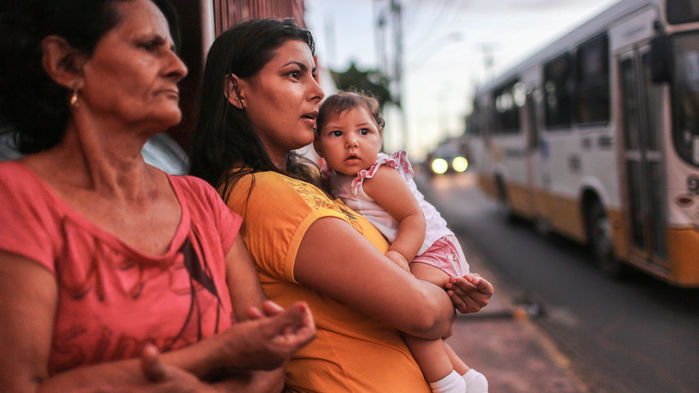 A Brazilian mother holds her daughter, who was born in 2016 with microcephaly, a Zika-caused birth defect. MARIO TAMA/GETTY IMAG

In 2016, as the mosquito-borne Zika virus spread through the Americas and cases of infected women having brain-damaged babies mounted, investigators raced to develop a vaccine. Now, a $110 million vaccine trial is underway at 17 sites in nine countries, but it faces an unexpected, and ironic, challenge. Cases of Zika have plummeted to levels so low that most people vaccinated in the trial likely will never be exposed to the virus, which could make it impossible to tell whether the vaccine works.

“Right now, there are no infections, and certainly not enough to even think about an efficacy signal at this point,” says Anthony Fauci, director of the U.S. National Institute of Allergy and Infectious Diseases (NIAID) in Bethesda, Maryland, which launched the trial. Human trials of other Zika vaccine candidates at earlier stages are also in limbo, and last year one large vaccinemaker pulled the plug on development of its candidate. But NIAID and others are pressing ahead, saying a vaccine might someday be needed. To make up for the lack of new cases, other investigators are turning to an unusual, and ethically complex, strategy. Starting next year, Science has learned, they plan to test a vaccine by deliberately infecting people with Zika.

Launched in March 2017, NIAID’s placebo-controlled vaccine trial includes two sites in Brazil, where Zika hit hardest and where the brain damage known as microcephaly first surfaced. From the beginning of the outbreak in 2015 until the start of this year, Brazil had about half of all 800,000 suspected and confirmed Zika cases in the Americas, according to the Pan American Health Organization in Washington, D.C. But from January through June, Brazil’s Ministry of Health reported fewer than 7000 probable cases, in a nation of 200 million people. “It’s a good dilemma because we don’t have Zika anymore,” says Esper Kallás of the University of São Paulo in São Paulo, Brazil, principal investigator for the local NIAID site. “But it’s a dilemma. Everybody is concerned about it. It’s a lot of investment.”

To date, 1380 participants have enrolled in the trial, which tests a vaccine containing a small circular piece of DNA that holds two Zika genes. From the outset, the researchers had planned to open new trial sites at infection hot spots, if needed. But new cases have dropped to a trickle throughout the Americas.

Further complicating the trial, many people throughout Latin America and the Caribbean have already been infected with Zika and recovered, which has left them immune to the virus and hence ineligible for vaccine trials. “We have problems finding people to participate,” Kallás says. Indeed, nearly 50% of 2147 Nicaraguans studied in Managua—which is not a site in the NIAID trial—tested positive for antibodies to the Zika virus between January and September 2016, a group reported 27 August in the Proceedings of the National Academy of Sciences.

Kallás says evidence of efficacy could still emerge from areas of São Paulo that, inexplicably, have had little Zika. Those pockets, where less than 5% of the people test positive for Zika antibodies, remain susceptible to the outbreaks that could give the vaccine a real test. “There’s this sense the epidemic will hit our region, but we don’t know when,” Kallás says. “We don’t understand why it didn’t happen already.”

Given the drop in cases, a surer way to test any vaccine against Zika is to deliberately expose inoculated subjects to the virus. Researchers have used this strategy, known as a human challenge trial, for decades to test vaccines against diseases that either can be effectively treated or, like Zika, typically cause mild symptoms.

But in 2017, an ethics committee convened by NIAID and the Walter Reed Army Institute of Research in Silver Spring, Maryland, called it “premature” for Zika. They worried that people intentionally infected with the virus might transmit it to their sexual partners, primarily through infected semen. And they were confident that traditional field trials could test the efficacy of the leading vaccine candidates.

The report froze plans for a human challenge study, which NIAID had agreed to fund. “It was a great setback,” says the study’s leader, Anna Durbin of the Johns Hopkins University Bloomberg School of Public Health in Baltimore, Maryland. “If we had been allowed to go forward, we’d know today which vaccine candidates look good.”

Now, the study is being considered again, as Zika disappears from the region and industry loses interest in bringing a vaccine to market. In a major blow, Sanofi Pasteur halted work on its vaccine, licensed from Walter Reed, in September 2017. “There’s a compelling reason to conduct a human challenge trial now,” says bioethicist Seema Shah of Northwestern University’s Feinberg School of Medicine in Chicago, Illinois, who chaired the 2017 ethics committee. But, she adds, “The details are complicated and it’s important to have a rigorous review.”

“If they’re careful, we have no problems supporting it,” Fauci says. Durbin plans to submit her new protocol for review in about a month, and in early 2019 hopes to start injecting Zika virus into people immunized with a vaccine containing live, but weakened Zika virus made by NIAID’s Stephen Whitehead. As a precaution, she plans to enroll only women at first, to avoid semen transmission from infected males. The volunteers will receive a low dose of Zika virus, and they will remain in clinics for the 2 weeks it typically takes to clear the infection. Any vaccine that works in the challenge study theoretically could then be evaluated in a real-world outbreak—just as is occurring now with an unlicensed but promising Ebola vaccine.

The much larger NIAID trial could also pay off, even if it doesn’t show whether the Zika vaccine is effective. It will yield data on safety and immune responses; combined with animal data on efficacy, the results might be enough for the U.S. Food and Drug Administration to license the vaccine, Fauci says.

But regardless of whether the trial leads to an approved vaccine, he has no regrets about launching it. “Zika was a very ominous threat just a couple of years ago, and there is certainly the possibility that it is going to come back,” Fauci says. “It’s a risk that you’ll spend this money and never use the vaccine, but balancing the importance of this infection and the impact it could have, we felt it was a good decision to move ahead. And I would be happy to defend that anywhere.”