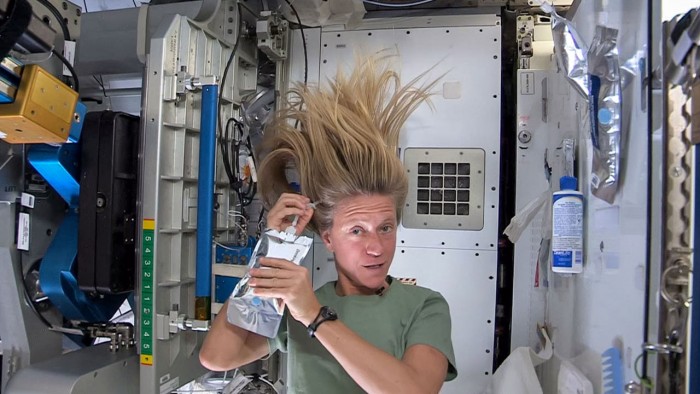 The International Space Station is home to potentially dangerous bacteria

There’s a little known, dirty story about the International Space Station (ISS): It’s filled with bacteria and fungi. A new study has found compelling evidence that microorganisms from human skin are present throughout the station, and some of the bugs could cause serious harm to astronauts.

NASA and its partner agencies go to extraordinary measures to reduce the likelihood that microbes will sneak a ride to ISS, requiring that payloads move through “clean rooms,” which are outfitted with high-powered air filtration systems and thoroughly mopped and scrubbed with disinfectants. But then ISS itself serves as a home to six microbe-filled humans who stay in orbit for as long as 6 months each and routinely shed skin cells when they exercise, comb their hair, eat, and do other activities that potentially can contaminate their isolated “built environment.”

Concerned about the possibility that astronauts might unwittingly be exposed to pathogens that lurk in a spacecraft’s surfaces or in air filters—biological contamination has been found in both the ISS and Russia’s MIR before—NASA asked researchers at its Jet Propulsion Laboratory (JPL) in Pasadena, California, to assess the problem. In the most comprehensive hunt for bacteria and fungi ever done of the ISS, the team sequenced genetic material plucked from dust found in equipment that returned to Earth: an air filter used for 40 months and two used vacuum cleaner bags. “We need to know what we’re breathing in a closed environment,” says JPL microbiologist Kasthuri Venkateswaran, who led a collaboration that included investigators from two NASA space centers, three universities, and a biotech company. “It’s always better to know before things get out of control.”

As Venkateswaran and colleagues explain online today in Microbiome, they relied on state-of-the-art “deep-sequencing” machines, which are better able to assess diversity and abundance of organisms than traditional techniques. They went an extra step and chemically removed cells that did not have intact membranes, increasing the likelihood that the DNA they isolated came from viable bacteria and fungi and not just remnants of dead bugs. For the past decade, NASA has swabbed surfaces in the ISS every 3 months and tried to culture pathogens. “Only 10% of what’s out there can be cultured, and that’s why genetic techniques were recommended,” Venkateswaran says.

The researchers compared DNA sequences derived from the ISS with vacuum bag dust collected over several months at two JPL clean rooms, which have about 50 people in them each day who inevitably leave behind bacteria. The most concerning finding was from the “high-efficiency particulate arrestance” (HEPA) air filter used in the ISS: 99.65% of the viable sequences they retrieved came from Actinobacteria, which, at most, accounted for only 25.25% of the viable sequences found in the JPL clean room vacuum bags.

The Actinobacteria phylum includes Corynebacterium and Propionibacterium; each genus was found in the ISS samples at a high level, which is “problematic,” says Venkateswaran, because they both have species that are opportunistic pathogens. Astronauts who live in microgravity for prolonged periods also can have compromised immune systems, he notes. The graphic below shows the relative proportions of different bacterial and fungal sequences the researchers found in the ISS HEPA filter and the vacuum bags from both the ISS and the JPL clean rooms.

The work has widespread implications, says Paula Olsiewski, who runs the Microbiology of the Built Environment program at the Alfred P. Sloan Foundation in New York City. “People have trouble understanding that we’re embedded in an invisible microbial world” and that we are colonized by those microbes, says Olsiewski, whose program has given academic researchers more than $40 million in grants. Although many researchers are studying microbiomes in buildings on Earth, she says, people opening windows in offices or mechanical ventilation systems can mix interior with outside air. “The advantage here is you don’t have any contact with outside air,” she says. “Up there, it’s a very closed system, and it provides a unique opportunity to concentrate the dust—and the microbes that are in the dust.”

Still, Jack Gilbert, a microbial ecologist at the Argonne National Laboratory in Lemont, Illinois (who is also a guest editor at Microbiome), stresses that more work must be done to understand the consequences of these findings. “They didn’t discover any pathogens,” he notes. And the differences with the clean room are “not remarkable,” he says. “Humans were wearing clean-room suits that could reduce the potential of the room being exposed to their microbial selves.”

Venkateswaran agrees that they need to do more work to assess whether any dangerous pathogens are lingering in the ISS, which they hope to do by isolating intact bacteria and looking for virulence factors, increasing the length of the DNA chains they can sequence, and expanding their analyses to include viruses. But he says microbial monitoring clearly needs to become more sophisticated in the ISS. “If NASA is going beyond the moon to Mars you need an automated biosensor,” he says. “I’m giving a background model and showing them these are the common things you can find, and a subset of them are ones where you have to be careful.”