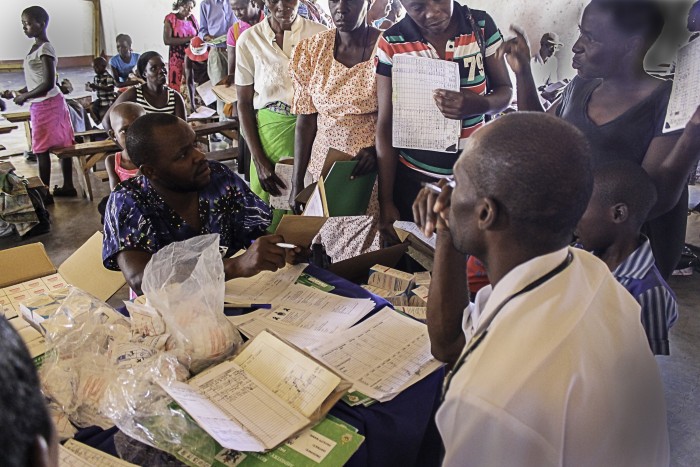 HIV-infected people in a remote Zimbabwean village receive antiretroviral drugs at the local church once every 2 months. Photo: TJ Maposhere

HIV/AIDS care for all—on a budget

HARARE–Every 2 months, a Land Cruiser stuffed with health care workers leaves Harare’s Chidamoyo Hospital early in the morning and drives 90 minutes east across washboard roads to the farming village of Nyamutora. Boxes of antiretroviral (ARV) drugs and medical records crowd the back of the vehicle. Sitting on pews at a Salvation Army church, nearly 150 HIV-infected people are waiting for the nurses and counselors. By the time the Land Cruiser leaves about 6 hours later, all will have received enough drugs to last until the team’s next visit, had their weight documented, and spoken with a nurse. Some will have had blood drawn for later analyses to test how they’re responding to treatment. This routine is a departure from the usual model of HIV treatment, in which drugs are available only to patients who regularly visit clinics. Yet the 143 Nyamutora villagers who have received their ARVs every 2 months through this 3-year outreach effort have done remarkably well, Benjamin Chimukangara, a molecular virologist at the Biomedical Research and Training Institute in Harare, reported here last week at the International Conference on AIDS and STIs in Africa.