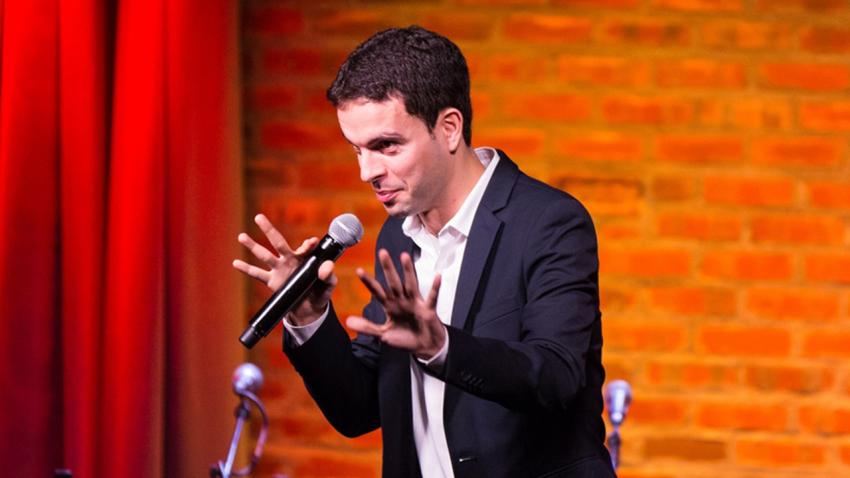 A physicist, a biologist, and a chemist walk into a bar …

WASHINGTON, D.C.—“I’m not a doctor,” Brian Malow announced at a standing-room only session in Washington, D.C., today at the annual meeting of AAAS (which publishes Science). “But I play one in the broken dreams of my parents.”

Malow, who bills himself as “Earth’s premier science comedian” and has a day job as a curator at the North Carolina Museum of Natural Sciences in Raleigh, was one of three presenters at the session who entertained the crowd with a mixture of jokes and serious insights about how comedy can educate the public and help scientists become better communicators. “The same tools that are good for comedy are just basic communication tools,” Malow said. “Be yourself. Be human. Be passionate, present, and prepared.”

One of the lessons Malow said he has learned doing stand-up comedy is not to wed yourself too tightly to a memorized script, which he said scientists all too often do with their canned presentations. Also, realize that you are the presentation. “Very often you see someone give a talk and they’re an OK speaker, but as soon as they’re done and the Q and A begins and they’re like ‘Well …’ They relax and they answer the question,” he said. “They become themselves. And you go, ‘I liked them a lot better in the Q and A.’ And that’s the person you want to be through the whole thing.”

Malow said he often uses analogies to spice up his comedy. He asked those in the audience to applaud if they knew that birds are dinosaurs. When the applause died down, he suggested that it’s no longer precise to state that dinosaurs were extinct. “For breakfast I had dinosaur eggs,” he said. He went outside, he continued to attendees, and found that a dinosaur had crapped on his car. It’s no mystery what dinosaur meat tastes like: chicken, turkey, pheasant. “Donald Duck, Daffy Duck, Tweety Duck? Dinosaurs.” he said. “‘Blackbird singing in the dead of night’? That’s a song about a dinosaur.”

Chris Duffy, another stand-up comedian, hosts “You’re the Expert,” a show broadcast on Boston’s National Public Radio affiliate, WBUR, that has three comedians try to guess the field of expertise of an invited guest (often a scientist) in front of a live audience. “We’re really good at asking dumb questions,” Duffy said. “As a lay person, one of the really big barriers is that you don’t want to look dumb. It’s scary.” He gave the example of yesterday’s headlines about gravitational waves, which he realized was important news but had no idea what it meant. “I’m like, ‘How basic of a question can I ask so people don’t laugh at me or think I’m dumb?’ The reason we love having comics on our show is comedians don’t fear people laughing at them. They want people to laugh at them. So for them, asking dumb questions comes naturally.”

One dumb question a comedian on his show asked Terence Capellini, a Harvard University scientist who studies evolution and bones, is whether we’d recognize Neandertals if they were walking down the street. Capellini’s answer got the laughs. “If they were not wearing a hat you’d probably notice them because they have slightly elongated skulls.” Not exactly a gut splitter, but it was “funny and fascinating” for the audience, Duffy said. “If a Neanderthal were wearing a hat you’d just be like, ‘That’s a weird looking person.’”

Duffy stressed that most comedy is not funny. “Most comedy is painful and awkward and horrifying and there’s nothing worse than someone on stage trying to make people laugh,” he said. “And then on top of that, most science comedy is both not funny and not interesting.”

The third presenter, communications researcher Amy Bree Becker of Loyola University in Baltimore, Maryland, contended that comedy can increase public interest in science. Becker’s research found that The Daily Show on Comedy Central devoted 50% more of its content to science than traditional TV news. It was also critical of the war on science and unbalanced coverage (particularly on climate change), and was deferential to scientific authorities. She argued that just as many young people learn about politics through these shows, they become engaged with science; she noted that astronomer Neil deGrasse Tyson was tied for the fourth most frequent interview guest on The Daily Show and The Colbert Report between 2003 and 2014.

“As a community we need to promote increasing coverage of science on comedy programs,” Becker said. “We need to think strategically about the way information regarding new discoveries is released. Not just presenting the fact but what kind of humorous spin can we put on it?”

Malow offered one other trick scientists could borrow from comedians to better engage audiences: Quote someone. Malow himself quoted the famed science fiction writer Isaac Asimov. “The most exciting phrase to hear in science, the one that heralds new discoveries, is not ‘Eureka!’” said Asimov, “but ‘That’s funny’ …”