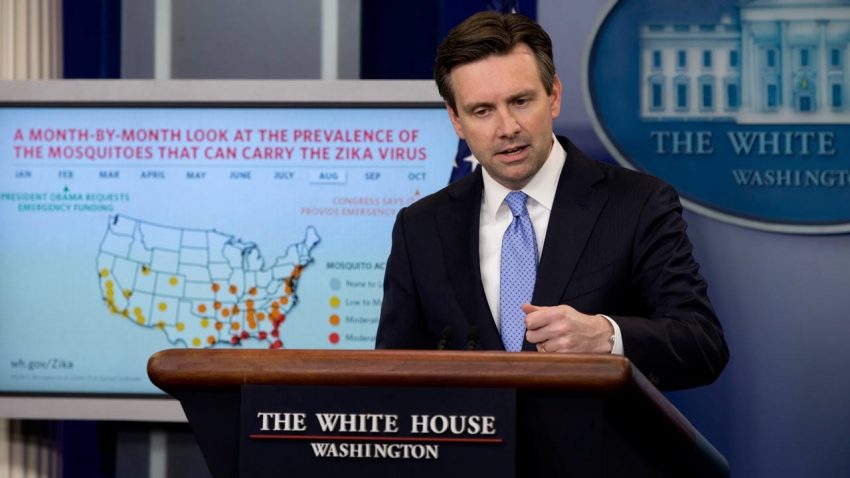 Yes, Zika will soon spread in the United States. But it won’t be a disaster

Politics will further increase the clamor: Just 2 days ago, White House Press Secretary Josh Earnest at his daily briefing pointed to a map that appears to show the virus blanketing half the continental United States by mid-summer. “The map behind me is a graphic illustration of the need for immediate congressional action,” said Earnest, urging Congress to heed President Barak Obama’s 3-month-old request to pump $1.9 billion in emergency aid to fight Zika.

But researchers who have studied Zika and the mosquitoes that transmit it say that the country is currently in the calm before the calm. Damaging as Zika is to fetuses, they predict that autochthonous transmission will only affect a small swath of the country that stretches from Florida along the Gulf Coast to Texas. And the dynamics of mosquito-borne disease in the United States are so different from those in Latin America that the number of confirmed cases probably will be in the hundreds, if that, before autochthonous spread sputters out.

There are many mysteries about Zika and how, in particular, it behaves in pregnant women, triggering some to miscarry and others to give birth to babies with brain disorders like microcephaly. There also are questions about how much spread occurs without a mosquito vector: Zika can persist in semen and be transmitted sexually, and there’s an outside chance that viral RNA in saliva, which never has been linked to an infection, might pose a risk. But when it comes to the mosquito species that harbor the virus and the transmission cycle with humans, a great deal is known. Experience with two other diseases spread by the same mosquitoes, dengue and chikungunya, offer insights as well.

The United States simply doesn’t have the ingredients for the type of explosive, autochthonous transmission seen in Latin America, says Thomas Scott, an entomologist and epidemiologist at the University of California, Davis. “I don’t want to blow this off and leave people with the impression that you don’t need to worry about it—who knows where this is going,” he says. “But I don’t think we’re going to have sustained transmission in the U.S., primarily because of our lifestyle. We also don’t have enough mosquitoes.”

The temperature-sensitive Aedes aegypti, the main mosquito vector, only lives in high numbers in a small portion of the United States, and mainly thrives in summer months when the temperature is between 25°C and 32°C. There are many more A. aegypti to spread Zika in Brazil—which saw up to an estimated 1.3 million infections in 2015 alone—than in the United States. There’s also a feast of human skin available, as people in warmer climes often wear tank tops, flip-flops, and shorts.

Poverty explains some of Zika’s success in Latin America as well. Window and door screens are uncommon in many locales, and houses often have stagnant tubs or pools of water in dark places that provide breeding grounds for the homebound A. aegypti, which Scott calls “the cockroach” of mosquitoes. “They don’t fly very far from where they emerge,” he says. “It’s mostly people moving the virus around.” Add to this mix Latin culture: “A lot of places where Zika is common the people are incredibly social, and they go all over the city to see family and friends,” he says, while in the United States, “people often come home and go inside and there’s air conditioning and they watch TV.”

As of 11 May, the U.S. Centers for Disease Control and Prevention (CDC) had confirmed 503 “travel-associated” cases of Zika in the United States, 10 of which involved sexual transmission. No evidence exists that a mosquito has yet bit any of these people and then spread the infection to another person in the country.

Scott recently collaborated on a global Zika modeling project led by Simon Hay, head of the geospatial science division at the Institute for Health Metrics and Evaluation in Seattle, Washington. The team mapped the environmental suitability for Zika based on annual rainfall, temperature, areas where A. aegypti persists, and conditions where Zika has already occurred.

The researchers also included data for A. albopictus—better known as the Asian tiger mosquito—which can harbor the virus. In the United States, A. albopictus has a greater range than A. aegypti. But Scott doubts it can keep the transmission cycle going because, unlike A.aegypti, it can bite a human as an appetizer and then turn to several other species to complete its blood meal. “Little changes in biting frequencies on an appropriate host can make a big difference” for transmission, Scott says.

The model, published online 19 April by eLIFE, calculated that 2.17 billion people in the world live in areas that are environmentally suitable for Zika. High-risk areas include more than half of Latin America—where the virus is now circulating—as well as parts of South and Southeast Asia, Northern Australia, and a broad swath of Africa around the equator.

But Zika’s potential for spread in the United States is limited. The only “highly suitable” regions are Florida and portions of nearby states to the west, including coastal regions of Alabama, Mississippi, Louisiana, and Texas.

The map shown at the White House press briefing came from another paper, published online 16 March in PLOS Current Outbreaks. The White House presents it as a “month-by-month look at the prevalence of the mosquitoes that can carry the mosquito virus,” visible as a wave of yellow, orange, and red circles washing over the country as 2016 progresses. (The White House Zika website has an even more alarming map prepared by CDC “from a variety of sources.”)

In the paper in PLOS Current Outbreaks, however, the figures indicate the “potential abundance” of the mosquito population—that is, how big it could be—based on a model that uses climate data. That potential range vastly exceeds the actual area where the mosquito is known to live. The map includes places as far north as Denver and Salt Lake City, where A.aegypti has never been seen.

“I don’t have any explicit comment on the use of the graphic by the White House,” says Andrew Monaghan, a meteorologist at the National Center for Atmospheric Research in Boulder, Colorado, who led the team that made the map. Monaghan stresses that “we were clear that our map primarily shows seasonal climatic suitability for Aedes aegypti, and is not meant to be a precise indicator of where the mosquito will be found.”

Monaghan and his colleagues from NASA and North Carolina State University in Raleigh agree that A. aegypti is most abundant in the region that stretches from Florida to the Gulf Coast of Texas. The map includes another variable that likely will fuel autochthonous spread: the number of travelers (shown as circles) arriving in the United States from Latin American and Caribbean countries that have local spread of Zika now.

Monaghan says that the places where Zika will most likely start spreading in the United States are those where dengue and chikungunya have done so as well. Those areas, colored dark brown on the map, are Brownsville, Texas, which abuts Mexico and has a busy land border crossing, and southern Florida.

If history repeats itself, these may be the only places Zika virus transmits in the continental United States.

Dengue was detected in the United States as far back as 1780 in Philadelphia, Pennsylvania, but autochthonous transmission stopped in 1945 and did not surface again until 1980 in Texas, when a 5-year-old girl in Brownsville became infected. In 1986, Texas had nine more documented autochthonous cases, four of which were in Brownsville, and the city again had three indigenous cases in 2005. Hawaii had 122 confirmed dengue cases in 2001–02. There, the vector was not A. aegypti, but A. albopictus. Florida first had dengue autochthonous transmission in 2009–10, with the Department of Health tallying a total of 88 cases“associated with Key West,” the southernmost part of the state. There have been other sporadic local transmissions since, all in the southern and central part of the state, with one serious outbreak in 2013 that involved 28 people.

Chikungunya has, so far, been equally easy on the United States. The first confirmed indigenous transmission occurred in Florida’s Miami-Dade County on 27 June 2014. Only 10 other cases followed, as CDC reported in December 2014. All of these occurred in southern Florida counties, too.

A third map, published in The Lancet 14 January, seals the deal that southern Florida is prime Zika real estate. These researchers analyzed passengers arriving in the United States who left airports in Brazil located within 50 kilometers of areas that potentially could transmit Zika year-round. They additionally highlighted U.S. regions that had the most hospitable climes for both Aedes species that transmit Zika. Miami and Orlando turn out to be the best airports of entry for the virus. (Brownsville does not get a mention, because it does not have a major airport.)

D.A. Henderson, an epidemiologist who helped lead the program that eradicated smallpox and has advised the U.S. government on several other infectious diseases, says the threat of Zika to the United States does not warrant the degree of fear and concern that it has triggered. “I can’t get very excited about this whole affair,” says Henderson, who now is at the UPMC Center for Health Security in Baltimore, Maryland.

Although he’s all for stepped-up mosquito control efforts, he stresses that the virus causes few, if any, symptoms in most people it infects and doesn’t transmit well between people. “We do not see smashing big epidemics,” he says.

Henderson, who is 87 and has seen many epidemics come and go, says the U.S. Zika media coverage is driven in part by the comparatively recent surge in laboratories that now work on viral diseases. “Their inclination, in good faith, is to say, ‘This could be a real problem’ to keep their money flowing to their laboratories,”  Henderson says. “It’s not evil and I don’t want virologists bereft of funds, but you have to keep in perspective what some of these things mean. It’s gotten a little out of hand.”