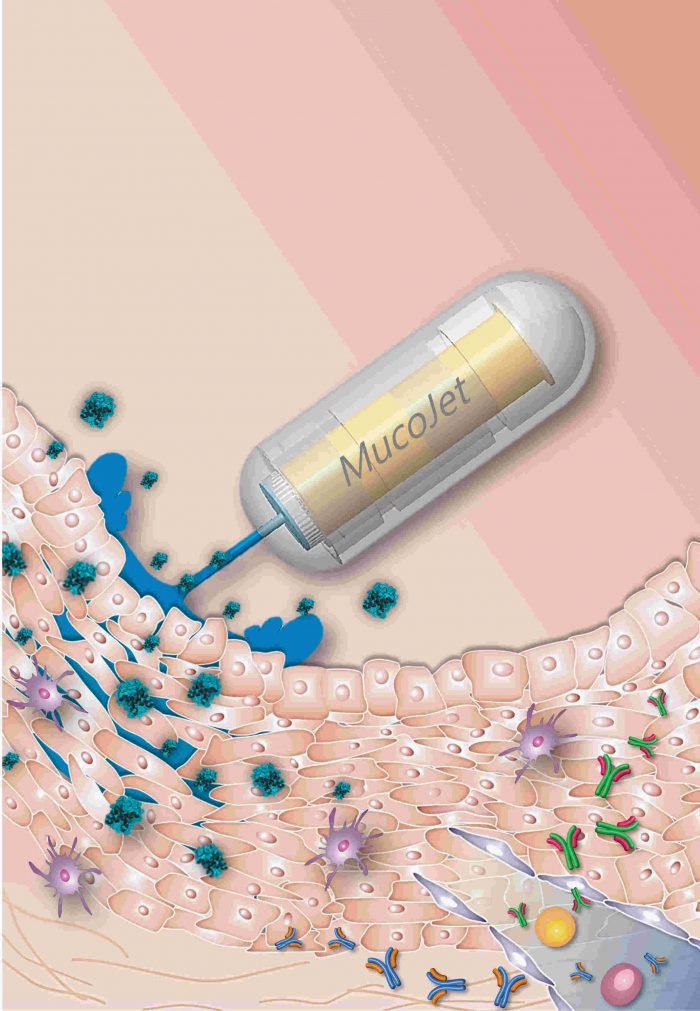 As good chefs stress, presentation matters. The same holds true for vaccinemakers, who know that how you deliver the ingredients powerfully affects potency. Now, researchers have devised a gel pill that can painlessly spray vaccine into the cheek and reach cells in the underlying tissue, potentially triggering what’s known as a mucosal immune response. This, in turn, might help thwart infections with pathogens like HIV, human papillomavirus, influenza, and gonococci that enter the body through the mouth, nose, or genitals.

Unlike injected vaccines, administering this “microjet vaccination” requires no particular skill. The researchers also contend that the capsule-shaped device, which they call MucoJet, triggers unique immune responses that neither oral nor injected vaccines can produce. “We can actually reach immune cells in the oral cavity,” says team member Kiana Aran, a bioengineer at the Keck Graduate Institute in Claremont, California.

The MucoJet capsule holds about five drops of water in an outer compartment. An interior compartment has two reservoirs separated by a membrane. One contains the vaccine—for their tests, the researchers used a liquid version of ovalbumin, a constituent of egg whites. The other contains powdered citric acid and sodium bicarbonate. When a person clicks the exterior and interior compartments together before putting the MucoJet in the mouth, water penetrates the reservoir holding the citric acid and sodium bicarbonate, creating carbon dioxide—a familiar high school chemistry experiment. One minute later, the bubbly gas buildup busts the membrane and propels a piston into the chamber that holds the protein, which then sprays out a nozzle at one end of the capsule. (FluMist, an influenza vaccine delivered by a squirt into the nose, does not rely on the force of the spray to penetrate tissue.)

In proof-of-concept experiments with pig tissue and live rabbits, Aran and her colleagues at the University of California, Berkeley, demonstrated that seven times more ovalbumin penetrated the cheek—known as the buccal tissue—when delivered by the capsule than when it was simply deposited on the cheek with a dropper. The result was an antibody response to the ovalbumin that was three times higher, the team reports today in Science Translational Medicine. The spray elicited antibodies specific to the mucosal immune system. The researchers contend that this vaccine strategy has “tremendous potential” in mass vaccination campaigns as it’s so much simpler to deliver than injections.

Jiri Mestecky, a mucosal immunologist based at the University of Alabama in Birmingham, says the MucoJet “looks attractive.” But Mestecky, who’s a leading proponent of mucosal vaccines, isn’t sure it will work for vaccinating people. The buccal tissue in rabbits and humans may differ substantially, he says, noting that people have fewer immune cells there that can be trained by a vaccine. “Buccal immunization has not been very effective in human studies,” he says.

What’s more, unlike injections, each person may absorb a buccal spray differently, which makes it difficult to deliver a uniform dose of a vaccine. He also points out that ovalbumin is soluble and may travel through the mucosa far more easily than the particulate proteins most vaccines contain.

Aran says her team can compensate for differences in protein solubility by adjusting the solvent, nozzle diameter, and spray pressure. As for the animal model, the researchers hope to now conduct experiments in monkeys or other species that more closely resemble humans.

A final consideration is the practical matter of aiming the spray. For the rabbit experiment, the researchers had to hold the MucoJet with the spray nozzle facing the animals’ inner cheeks, a step that would be cumbersome when vaccinating people. “For a human I’d envision this as a lollipop that you hold against the tissue,” Aran says. That would give new meaning to a spoonful of sugar helping the medicine go down.