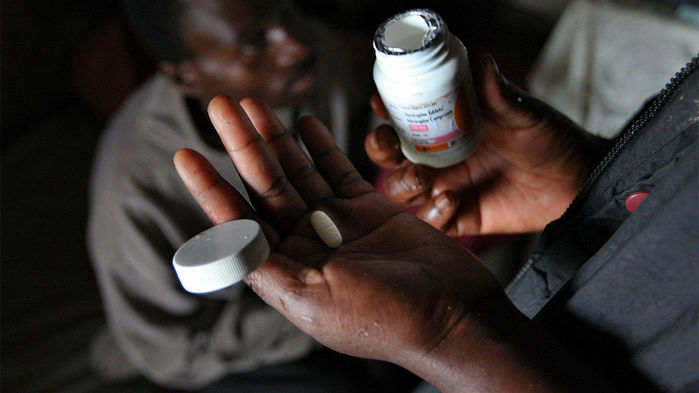 The rate of new HIV/AIDS infections has plummeted in hard-hit Swaziland, showing the power of treatment as prevention. JON HRUSA/EPA/Redux

PARIS—New data from Swaziland, a tiny country in southern Africa, provide some of the most convincing evidence yet that aggressively ramping up treatment for HIV/AIDS works on a population level to cut the rate of new infections. The kingdom has had one of the worst HIV/AIDS epidemics in the world, but since 2011, its massive scale-up of testing and treatment has slashed the rate of new infections by 44%.

Several studies have firmly established that when antiretroviral drugs (ARVs) are taken consistently they drive the level of HIV in the blood down below the level of detection on standard tests. In response, the risk of an infected person transmitting the virus plummets. This led to the concept of so-called treatment as prevention, and mathematical models suggest that if 73% of a population suppresses their virus, new infection rates will nose-dive and epidemics can sputter out. But many questions remain about this theory, especially after a report last year showed that Botswana had come close to hitting this target without seeing much impact on its rate of new infections..

New data presented here at the International AIDS Society’s (IAS’s) international conference show Swaziland, a landlocked country of 1.45 million people that’s bordered by South Africa and Mozambique, has made “remarkable progress,” said Velephi Okello from the country’s Ministry of Health in Mbabane. As Okello explained, a survey in 2011 showed that 32% of the Swazi population between the ages of 18 and 49 was living with HIV—the highest prevalence of any country in the world. At the time, only 72,402 of those people were receiving ARV treatment. Only 34.8% of the infected population had suppressed the virus. The rate of new infection, or incidence, was 2.5% per year.

Today, 171,266 HIV-infected people in Swaziland receive ARVs, thanks to support from the U.S. government President’s Emergency Plan for AIDS Relief program (PEPFAR), and the Global Fund to Fight AIDS, Tuberculosis and Malaria. A 7-month survey, funded by the Washington, D.C.–based PEPFAR and completed in March, found that 73.1% of the infected population now has fully suppressed virus, and Okello said the HIV incidence had dropped to 1.4%—a 44% decrease. In addition to ramping up treatment, the country also has seen big increases in men opting to be circumcised, a proven way to lower the risk of becoming infected by the AIDS virus.

The room erupted into hoots and applause. “These findings are cause for celebration,” says Wafaa El-Sadr, an epidemiologist at Columbia University whose group helped Swaziland conduct the surveys. “It’s a dramatic blunting of new infections.”

“These are really beautiful data,” said Linda-Gail Bekker of the Desmond Tutu HIV Centre in Cape Town, South Africa. Bekker, who was not involved in the study, is also the president of IAS, which sponsored the meeting.

PEPFAR Director Deborah Birx said the new data were rigorously collected. “The thing that’s so exciting about Swaziland is they had a very true baseline from 5 years ago with very similar methodology so you could go in there and see which parameters changed and which parameters didn’t change,” Birx says. She stresses that treatment as prevention by itself won’t eliminate HIV in Swaziland. “This is our way to contract the epidemic on our way to vaccine and a cure,” she says.

Swaziland still faces serious challenges, Okello noted. Only 66.1% of HIV-infected people in the 15- to 24-year-old age bracket, know their status—far lower than the 84.7% seen overall—and of those, only 81.7% are receiving ARVs. More sobering still, about one-fourth of those receiving treatment in the younger group are not suppressing their infections. “They’re lagging behind,” Okello said.

Michel Sidibé, head of the Joint United Programme on HIV/AIDS in Geneva, Switzerland, worked in Swaziland 25 years ago when the virus was just starting to make headway. “We saw the epidemic exploding in South Africa and the migration with Swaziland was so big I could see the big risk,” Sidibé says. But Swaziland was reluctant to promote education about sexuality and had a traditional, decentralized approach to the growing spread of the virus, he says. “The major, major breakthrough started coming when the current king understood it was a survival issue for his nation about 6, 7 years ago.”

Sidibé says he hopes the U.S. government will take notice of the Swaziland success and recognize the importance of maintaining its substantial investments in PEPFAR and the Global Fund. (It’s the biggest single donor.) “The best news of this conference will be the Swaziland results,” Sidibé says. “The result should drive all our efforts.”

Although U.S. President Donald Trump strongly supported PEPFAR while he was a candidate, his Secretary of State Rex Tillerson last month alarmed many in the HIV/AIDS community when he testified at a U.S. Senate hearing about proposed budget cuts that could limit PEPFAR’s extensive reach. “The program monies that are available are to sustain the HIV treatments in 11 countries to continue to take those to conclusion,” he said.

Birx says this was a misunderstanding. “That is totally my fault,” says Birx, explaining that she wrote a briefing paper that called for accelerating the PEPFAR effort in 11 countries. “We’re not leaving the other 50 countries that we’re in.”