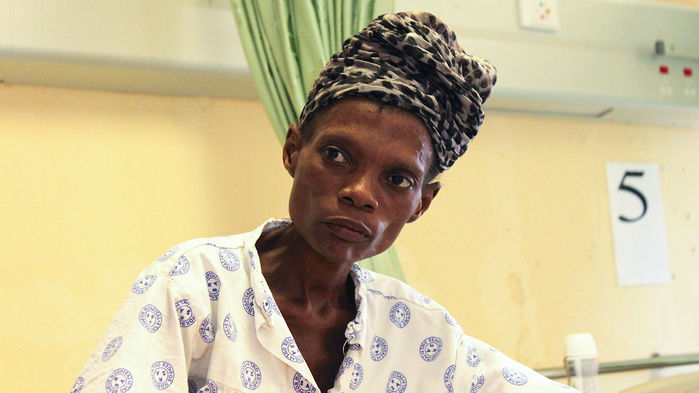 Tuberculosis piggybacks on HIV and many people, like this woman in South Africa, wind up hospitalized with life-threatening cases of the curable lung disease. JON COHEN/SCIENCE

Weeks after a person is infected with HIV, levels of the virus in the blood skyrocket before dropping down to a “set point” that remains relatively constant after the immune response kicks in. Lower set points confer a couple benefits: Even without HIV/AIDS drugs, people progress more slowly to disease, and they’re less likely to transmit the virus to others. About 25% of the time, genetic factors drive the lower set point, according to previous genome-wide association studies.

Of the two known genetic factors, the most powerful comes from genes that control proteins known as human leukocyte antigens (HLAs). Different HLAs determine the strength of a person’s immune response against HIV. The second factor is white blood cells that are naturally resistant to HIV infection. HIV needs to dock on two different receptors to enter a cell, and mutations in one of them, known as CCR5, thwart HIV.

To find out whether other genetic factors affect the HIV set point, researchers probed the International Collaboration for the Genomics of HIV, which contains genetic and clinical information from a database of about 11,000 people around the world living with the virus. Until now, most studies using the database have focused on people of European descent, says geneticist Paul McLaren of the Public Health Agency of Canada in Winnipeg. So, McLaren and colleagues looked at 2500 people of African descent. And they found a third factor at play.

The genetic signature popped out on a stretch of chromosome 1 that the researchers linked to a lower HIV set point. Although they did not find an affected gene, the region plays a role in the integration of HIV DNA into human chromosomes, a key step in the viral life cycle. “This is a real signal of something new,” says John Coffin, a virologist at Tufts University here. “Discovering the gene and the specific mutations involved in the association could reveal previously unexpected virus-cell interaction pathways and both contribute significantly to our basic understanding of HIV and point the way to new therapies.”

A separate report at the meeting found a simpler way to prevent tuberculosis (TB), the No. 1 reason people with AIDS die from the disease. Researchers followed 3000 people in 10 countries over 2 years who were living with HIV and also likely had latent TB, a bacterial infection that can be cleared with proper treatment. Instead of subjecting them all to a recommended prevention strategy—a 9-month course of the drug isoniazid—they treated half with the 9-month course and half with a monthlong combination of isoniazid and rifapentine.

Nearly an identical number of people in each group developed an active case of TB or died from the disease during the study, meaning that the drug combo might work as effectively as the standard treatment, says Richard Chaisson, a TB researcher at Johns Hopkins University’s School of Medicine in Baltimore, Maryland, who presented the report. “The results are a game changer,” he says. What’s more, 97% of the participants in the two-drug group completed the 1-month treatment, compared with just 90% for those in the 9-month group. (Those rates are far higher than seen in the real world.) “This is an outstanding trial,” that could lead to real changes in policy recommendations, says Haileyesus Getahun, a coordinator at the Global TB Programme of the World Health Organization in Geneva, Switzerland.

The 1-month course of treatment now costs $72, which Chaisson says will break the budgets of many hard-hit countries. “The cost needs to come way down,” he says. But the drugs are off patent, he notes, and could be made by generic drug companies if enough interest existed.

The vast majority of people who have latent TB are not infected with HIV, and—although they’re at lower risk of developing active cases—this finding may apply to them, too. “It’s high time to explore if it’s potential could be extended beyond just people living with HIV,”  Getahun says. “New studies are urgently needed.”