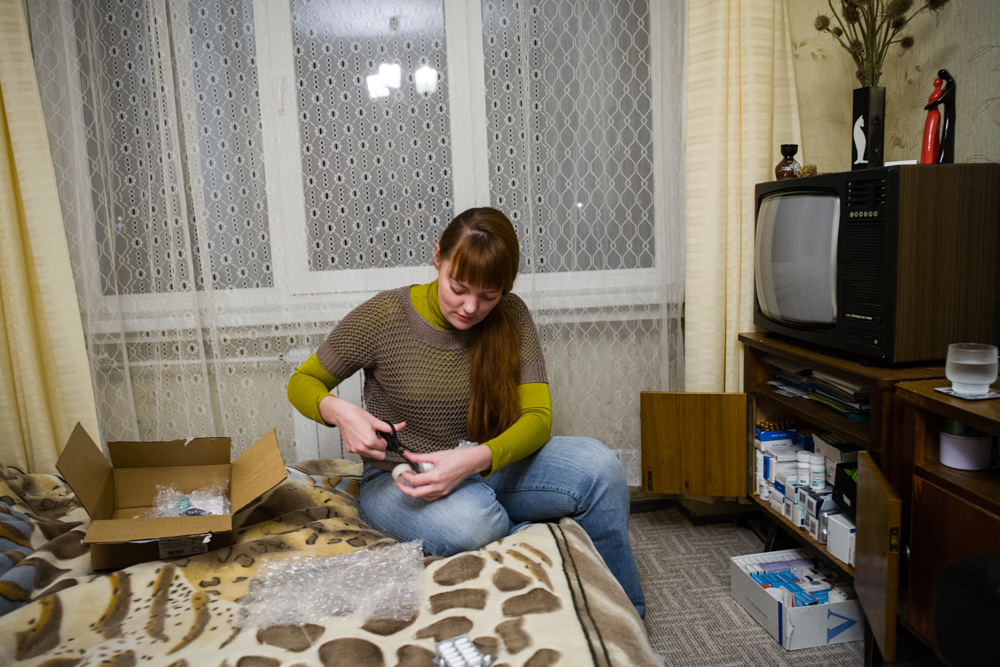 Yulia Vereschagina packs up anti-HIV drugs at her St. Petersburg home that she shares with others as part of a "reserve pharmacy." MISHA FRIEDMAN

In the face of a misguided response to HIV/AIDS in Russia, these bright stars are taking charge

In 2015, Pavel Lobkov, a news anchor on TV Rain, an independent station in Moscow, confronted a predicament unlike any he had faced in more than 2 decades working as a journalist. It was World AIDS Day, and he was slated to host a show. His guest was the head of the Federal Center for the Prevention and Control of the Spread of AIDS, Vadim Pokrovsky. For 12 years, Lobkov had been Pokrovsky’s patient.

Lobkov had never spoken publicly about his HIV status. No well-known person in Russia ever had—Russia had no Magic Johnson. He asked a close friend for advice, who said to either call in sick or reveal his status. Lobkov switched off his cellphone. “Otherwise, I can call a second friend, a third friend, and somebody would distract me from doing this,” he says.

Lobkov opened the show, Hard Day’s Night, by explaining that Pokrovsky was more than a guest. “You are the one I came to with my trouble in 2003,” he said, recounting the heartless way another doctor told him his diagnosis. His on-air revelation made headlines, even in the United States. And the fact that he was then nearly 50 and didn’t have spots on his cheek, look exhausted, or show any signs that he was infected sent an important message to Russians, he says: You can live a normal life with HIV. Pokrovsky’s AIDS center saw a jump in people coming in for HIV tests, and Lobkov received a flood of questions on social media seeking his advice.

Why did it take until 2015 for a prominent Russian to finally reveal that he was living with HIV? “We are still Soviet,” Lobkov says. “And we are still trying to keep our problems inside us.”

Last year, on the streets of St. Petersburg, a poster appeared, featuring an attractive young man and woman looking into each other’s eyes. “People with HIV are just like you and me,” it read. It was part of a provocative campaign to encourage HIV testing in a country where the infection is still highly stigmatized. In an extra twist, the woman, Tatiana Vinogradova, is the prominent deputy director of the city’s AIDS center, and the man, Andrey Skvortsov, who is living with the virus, is her husband.

They decided to do the poster, says Skvortsov, who runs a nongovernmental organization called Patients in Control, “to do the maximum we could” for both the patient community and public health. “I try to motivate people, I’m an example,” says Skvortsov, who was diagnosed in 1997 with an HIV-ravaged immune system and today, thanks to antiretrovirals (ARVs), is healthy.

Vinogradova had another goal as well: to reduce bias and fear within the health care community. “I have a lot of friends who are doctors because we studied together at university, and they are still afraid of HIV patients,” says Vinogradova, whose mother once ran the city’s AIDS center and whose grandmother diagnosed the city’s first HIV case. “They’re not afraid of TB [tuberculosis]. They’re not afraid of hepatitis C. In the late ’80s, AIDS was the plague of the 20th century and it’s still in their heads.”

That stigma hit home 3 years ago, she says, when Skvortsov broke his collarbone in a bicycle accident. As a surgeon described the operation needed to repair his fracture,  the couple told him that Skvortsov was living with HIV. Vinogradova offered to bring his medical records to show that he was on ARVs, that the virus was undetectable in his blood, and that his immune system was normal. The surgeon left the room, and when he came back, he said Skvortsov needed only a sling. They went to another hospital, where a surgeon had no concern about Skvortsov’s HIV status and scheduled the operation for the next day.

Skvortsov and Vinogradova feel the situation is improving, if slowly, because the increasing severity of the epidemic has rattled complacent officials, and a new generation of doctors and activists understands the disease and what needs to be done. But they believe the situation will have to become bleaker before the epidemic receives the urgent, full-force response that’s needed. “We have to be facing something terrible, and then there will be change,” Skvortsov says. “It’s the Russian mentality.”

In 2012, when Alexander Chebin was dying from AIDS, he met a Pentecostal bishop who persuaded him to seek care and start taking antiretrovirals (ARVs). Chebin, who had served time in prison for a heroin-related offense and did not believe that HIV causes AIDS, realized “it was time to change not only my mind, but my faith.” Now a pastor himself, Chebin is part of an informal network of activists in seven Russian cities who give other people with HIV hope through what they call a “reserve pharmacy.”

People who can’t access ARVs, mainly because government clinics have run out, post their problems on social media sites that Chebin and other activists monitor. Some people use private chats on Facebook, but many others post to a public website called pereboi.ru that is run by Patients in Control, “a movement of people living with HIV and other socially significant diseases.” Chebin and other like-minded activists, or “consultants,” in turn distribute ARVs to people in need in their areas.

At his home, Chebin keeps a large stock of ARVs donated by people who have switched drugs or by relatives of people who have died. He also swaps ARVs through the informal network with activists such as Yulia Vereschagina, who lives in St. Petersburg and keeps her own large stash of medicine in a cabinet under her TV. Vereschagina, a consultant with pereboi.ru, says she filled 600 requests between March and November 2017, sending 140 packages to Chebin and suppliers in other cities.

Vereschagina got involved with the network in March 2017, when she had side effects from her own ARVs and her clinic said it could not take back the pills that she wanted to return. She says people ask for help not only because of drug shortages, but also because the official process of registering for treatment can take months and is sometimes impossible. “Until the situation with the medication improves, I’m often the only source,” she says. “There’s always a shortage somewhere.”

Vadim Pokrovsky, head of the Federal Center for the Prevention and Control of the Spread of AIDS in Moscow, is—to borrow from a Russian saying—deft enough to “shoe a flea”: He’s a top government official who speaks critically about its policies and yet keeps his job. “At the present moment, there are no real attempts to overcome the epidemic,” he says, noting that Russian President Vladimir Putin has not mentioned HIV/AIDS in a decade. “We need something new.”

Pokrovsky’s to-do list runs long. The government now spends 24 billion rubles (about $400 million) on HIV/AIDS prevention and treatment, a sum he thinks should be quadrupled. He dismisses the government’s boast that it has expanded testing to some 32 million people each year. “Who was tested?” he asks. “Old women and children.” The conservative Russian Orthodox Church, he complains, has stifled sex education and condom campaigns. “I think it’s better first to save the life and then to save the soul,” he says.

Gregory Vergus, the St. Petersburg–based regional coordinator of a nongovernmental organization, the International Treatment Preparedness Coalition in Eastern Europe and Central Asia, says Pokrovsky’s voice is essential because the entire system, from testing to delivering drugs, is badly broken. “Nobody in the government cares at every step of the way,” says Vergus, whose group advocates to make anti-HIV drugs more accessible in Russia. “He’s the only one.”

But other people question the extent of Pokrovsky’s commitment. One U.S. AIDS researcher sharply criticized Pokrovsky’s plenary talk in April at an HIV/AIDS conference in Moscow. “He addressed no modern preventive interventions beyond the era of the condom, did not speak to treatment as prevention, did not address the urgency around harm reduction, and did not address pre-exposure prophylaxis for those at risk,” says Chris Beyrer of the Johns Hopkins Bloomberg School of Public Health in Baltimore, Maryland. Beyrer says Pokrovsky may have held his tongue because the conference included many health officials from countries Russia wants to influence. “It was difficult not to come away with the take-home that the federal authorities were again refusing to take an evidence-based approach to the expanding HIV epidemic in Russia.”

Pokrovsky concedes his job is “rather difficult. … Every morning I say it’s necessary to quit this work if there are no results, no progress. But in the evening, I’m thinking about what problem to go after the next day.”

Reporting for these stories was supported by the Pulitzer Center.