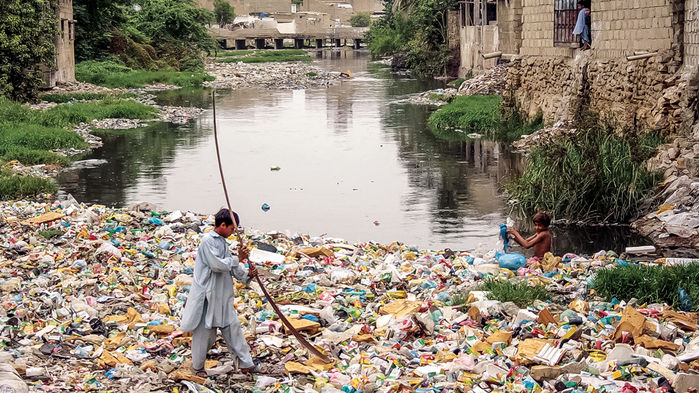 An antibiotic-defying strain of the bacterium that causes typhoid fever is gaining a foothold in Pakistan, leading some researchers to warn that it could turn the clock back 70 years, when surviving the disease was more a matter of luck than treatment. In the past 6 months, more than 2000 people in Pakistan have been infected with extensively drug-resistant (XDR) Salmonella typhi, according to the National Institute of Health in Islamabad. Only one oral antibiotic, azithromycin, works against the XDR strain, and the other options—expensive intravenous (IV) drugs—are impractical for widespread use in Pakistan and other low-income nations. S. typhi experts worry that the outbreak could soon spill into other countries.

“This is indeed a really alarming situation,” says pediatrician Zulfiqar Bhutta of The Aga Khan University in Karachi, Pakistan. “I’m not sure what can be done, as the horse has bolted. This will jump boundaries before long.”

Spread through contaminated water and food, S. typhi causes up to 22 million cases of typhoid fever a year. Early symptoms include high fever, headaches, and stomach pain. Left untreated, typhoid fever can lead to intestinal hemorrhage and perforation of the bowel, and kill up to 15% of infected people. Despite the availability of effective antibiotics, about 200,000 people die annually.

Early this year, researchers warned that Pakistan was experiencing the world’s first outbreak of  XDR S. typhi strain, reporting 339 cases that were mainly in Hyderabad, east of Karachi. The strain can’t be stopped by the three antibiotics most commonly used to treat typhoid fever, or two additional classes of drugs used to treat strains resistant to those antibiotics, they reported on 20 February in mBio. The XDR strain, which has now made significant headway in Karachi and other locales, is “really quite frightening,” says Myron Levine, an S. typhi vaccine developer at the University of Maryland School of Medicine in Baltimore who was not involved in the mBio study. It is only a matter of time, he notes, before S. typhi develops resistance to azithromycin, too. If that happens, the remaining effective drugs, carbapenems, require hospitalization and an IV drip; treatment can cost thousands of dollars per patient.

Pakistan began a vaccination campaign in February using a recently approved formulation that, for the first time, works in young children and triggers longer-lasting immunity than older versions. The Bill & Melinda Gates Foundation in Seattle, Washington, is funding the campaign, which aims to administer 200,000 doses of the new vaccine. And earlier this month, Gavi, the Vaccine Alliance, a nonprofit based in Geneva, Switzerland, agreed to purchase 10 million additional doses for Pakistan.

Inappropriate use of antibiotics is probably only an indirect cause of S. typhi’s acquisition of extensive drug resistance, says Elizabeth Klemm, an infectious disease geneticist at the Wellcome Sanger Institute in Hinxton, U.K., and the first author of the mBio study. Rather, she says, it appears the XDR strain emerged because an existing S. typhi strain that was resistant to multiple drugs—probably because of antibiotic overuse—obtained an additional resistance gene from a plasmid (a circular piece of DNA) likely transferred from Escherichia coli, a bacterium common in human waste and polluted waterways.

Pediatrician Anita Zaidi, who heads the Gates Foundation vaccine program and is from Pakistan, says the country’s municipal and provincial governments have had difficulty working together to solve sanitation problems. She expects the situation to worsen because “we’re now getting into monsoon season, so there’s even more mixing of drinking water and sewage.”

Rumina Hasan, a microbiologist at The Aga Khan University who was the senior author of the mBiostudy, says her lab already finds the XDR strain in about one in three blood samples from typhoid fever patients it tests.

Travelers to Pakistan—including two from the United States—have already returned home with the XDR strain. This poses little threat of spread in developed countries such as the United States, says Eric Mintz, head of the Global Water, Sanitation, and Hygiene Epidemiology team at the U.S. Centers for Disease Control and Prevention in Atlanta. But in countries that have a weak water and sewage infrastructure, an imported case could trigger an outbreak. “This is a very serious problem,” Zaidi says. “If it can happen in one country, it can happen in others.”