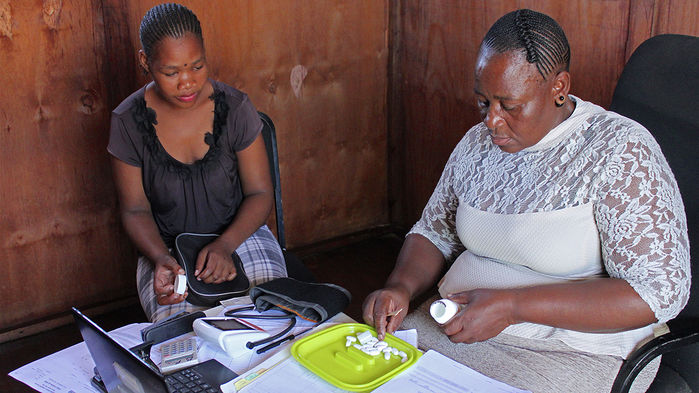 New results are raising hopes for easing one challenge of living with HIV: the need to take daily pills for life, both to ward off AIDS and to lower the risk of transmitting the virus to others. Missing doses can also foster the emergence of HIV strains with drug resistance, a danger both to the person receiving treatment and, if those strains spread, to entire populations. Now, a large-scale study has shown over 48 weeks that monthly injections of two long-acting anti-HIV drugs work just as well as taking daily pills.

ViiV Healthcare, a London-based collaboration between GlaxoSmithKline and Pfizer, revealed the highly anticipated findings in a press release on 15 August. This shareholder announcement, required by regulatory agencies to inform investors, offered scant data. But it was welcome news to other researchers studying long-acting anti-HIV medication schemes—and to clinicians who think they could transform both treatment and prevention of HIV infections.

Anton Pozniak, an HIV/AIDS clinician at Chelsea and Westminster Hospital in London, says long-acting injections could help HIV-infected people who have “pill fatigue,” difficulty swallowing the medication, or psychological issues that make it hard to cope with a daily reminder that they have a deadly virus. He calls the results “a fantastic development” but adds, “We still have a way to go.” Even if these injectables win regulatory approval, many practical questions remain about their cost, the impact of missing shots, inflammation at injection sites, and the burden on health care systems of providing monthly intramuscular injections.

The phase III study, called Antiretroviral Therapy as Long-Acting Suppression (ATLAS), is testing an experimental drug, cabotegravir, made by ViiV, and rilpivirine, a licensed medicine from Janssen Sciences Ireland UC in Dublin, in 618 HIV-infected people from 13 countries. All had fully suppressed the virus for at least 6 months with oral drugs. Half stayed on daily pills, while the others received an injection into the buttocks of each drug once a month. Viral suppression was the same in both groups, ViiV’s statement says.

Kimberly Smith, who heads R&D for ViiV from Durham, North Carolina, says the injectables could make it easier for clinicians to know for certain that patients are adhering to their treatment. Studies have shown that about 30% of HIV-infected people have difficulty doing so at some point; even those taking just a single multidrug pill a day miss doses. Smith, an HIV/AIDS clinician before she came to ViiV, says, “I experienced having patients die … because they just couldn’t get over that hurdle of taking that pill every day.”

Long-duration anti-HIV drugs could also protect uninfected people at risk of getting the virus. Such people are even more reluctant to take daily pills, as required for so called pre-exposure prophylaxis (PrEP). Raphael Landovitz, a clinician at the University of California, Los Angeles, who studies long-acting drugs for PrEP, says the ATLAS data are “incredibly encouraging and exciting” and are “certainly reassuring” to people doing similar prevention work.

Landovitz is collaborating on studies of how long-acting injectables, including cabotegravir and, separately, a monoclonal antibody developed by the U.S. National Institute of Allergy and Infectious Diseases (NIAID) in Bethesda, Maryland, improve adherence in people on PrEP. Also underway is a phase III study of the ATLAS regimen in HIV-infected people who have never taken any antiretrovirals. It addresses the possibility that patients in the original trial, who were on oral drugs beforehand, might harbor resistant virus that could undermine the effectiveness of the injections. And a trial called ATLAS 2 will ask whether the injectables can effectively suppress HIV if given only once every 8 weeks.

Other long-acting HIV treatments at earlier phases of clinical testing include injections of a new Gilead Sciences drug that cripples the making of HIV’s capsid protein, a novel target. Researchers also are exploring long-acting alternatives to injections, including a Merck & Co. pill that inhibits HIV’s reverse transcriptase enzyme for up to 10 days. In the future, researchers hope to extend the effect of antiretrovirals with slow-release skin implants or polymer-based pills that slowly dissolve in the stomach.

If both phase III studied have positive results, the drugmakers could apply for regulatory approval next year. But Landovitz cautions that many “nuanced questions” remain about how to use these long-acting drugs. What’s the optimal dose and timing of injections? What resistance mutations might emerge and how would they hamper the effectiveness of conventional oral drugs?

Although a long-acting drug regimen can be a blessing, Smith says, “it has the potential to be a curse if a person disappears.” Because the drugs metabolize so slowly, they can have an unusually long pharmacological “tail,” their presence steadily declining in blood and tissues for a year or longer, which could allow drug-resistant strains of HIV to flourish.

It’s anyone’s guess what the long-acting drugs would cost and whether developing countries could afford them. It’s also unclear how many people will opt for injections over pills. So only real-world experience will prove whether long-acting interventions will be “a niche or transformative,” Landovitz says. As NIAID head Anthony Fauci puts it, “This is not the end game, but it’s an important first step.”