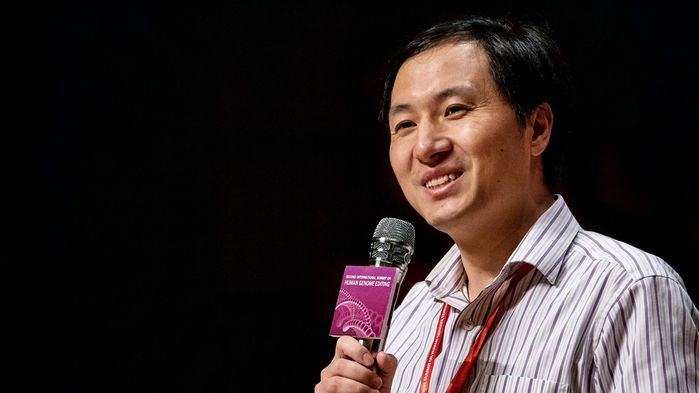 For his talk at last week’s summit, He Jiankui was accompanied by security guards because of threats.   ANTHONY KWAN/BLOOMBERG/GETTY IMAGES

Few seemed more surprised by the tide of outrage unleashed by the claim that the first gene-edited babies had been created with the revolutionary lab tool called CRISPR than He Jiankui, the scientist responsible. On the eve of the International Summit on Human Genome Editing in Hong Kong, China, last week, He, a researcher at nearby Southern University of Science and Technology in Shenzhen, China, had dinner at the city’s Le Méridien Cyberport with a few of the meeting’s organizers. The news of He’s claim had just broken, and shock waves were starting to reverberate. But the reports were still so fresh that the diners sat in the restaurant without being disturbed.

“He arrived almost defiant,” says Jennifer Doudna, who did landmark CRISPR work at the University of California (UC), Berkeley. She and the other conference organizers politely asked He questions about the scientific details and rationale of his work, the permissions he had secured to conduct it, and how he recruited hopeful parents to participate and informed them about risks. He asked them whether his planned talk 2 days later should include data about the twin girls, who had a gene altered to make them resistant to HIV infection. “We were all like, ‘Uh, yes,’” Doudna says.

After more than an hour of questioning, He had had enough. “He just seemed surprised that people were reacting negatively about this,” Doudna says. “By the end of the dinner he was pretty upset and left quite abruptly.”

Bioethicist Alta Charo of the University of Wisconsin Law School in Madison says He seemed “quite sincere” in his aim to engineer babies who would not suffer the illness and stigma that had plagued their HIV-infected father. He appeared to believe he had complied with ethical guidelines for what’s known as germline editing—creating heritable alterations in early embryos, sperm, or eggs. “That kind of rocked me back,” Charo says. “He talked about

Robert Edwards, the ‘father’ of IVF [in vitro fertilization]. I got the strong impression that he saw Robert Edwards as a kind of hero, a paradigm breaker, a disrupter, and that he wanted to model himself after that.”

It seems unlikely history will view He in the same light as Edwards, who won a Nobel Prize, but the Chinese researcher certainly is a disrupter. His claim has triggered widespread calls for mechanisms to prevent others from germline editing humans until there’s an international consensus that the CRISPR technology has matured and there’s a convincing medical need. And it has sparked concern that his actions could set back less problematic applications of gene editing: treating diseases by editing nongerm cells, which do not pass their DNA to future generations. “I do hope that this very visible misadventure does not cause a cloud over the entire area of gene editing for therapeutic benefit,” says Francis Collins, director of the U.S. National Institutes of Health (NIH) in Bethesda, Maryland, who issued an unusually blunt condemnation of He’s work. “I think that would be utterly irrational.”

First, though, scientists, ethicists, and government officials are trying to understand how and why He staged this experiment, whether it accomplished the limited success he claims, and whether the babies are healthy. In a hastily arranged, hourlong session at the summit, He reported that in one of the twins, his team had successfully mutated both copies of the gene for CCR5, a protein on immune cells that HIV exploits to establish an infection. Several of his slides were too dense with information for the audience to immediately digest. But closer analysis led many researchers to assert later that both girls had evidence of at least one normal CCR5 gene, which would mean they were completely susceptible to the AIDS virus. What’s more, He has not yet tested whether HIV can infect cells taken from the girls.

At the summit’s end, organizers called for an independent assessment of He’s work. Some take comfort in the doubts. “I would actually hope … there’s not genome-edited humans brought into this world yet,” says pediatrician Matthew Porteus of Stanford University in Palo Alto, California, one of the organizers. “It just puts a pit in my stomach.”

He said his team has a plan for long-term follow-up of the twins’ health, although he did not explain who would fund it. To the relief of many at the meeting, He did present extensive, if preliminary, data indicating that CRISPR had not made unwanted “off-target” cuts in the genomes of the babies, a key safety concern in genome editing. During the questions, He revealed that a second woman is pregnant with a gene-edited baby. A paper on the twins is being considered by a peer-reviewed journal, He said, adding he had been dissuaded from posting it as a preprint. (He did not return requests for comment.)

Taking the podium after He’s talk, David Baltimore, a Nobel laureate from the California Institute of Technology in Pasadena who also helped organize the meeting, decried the “failure of self-regulation” by He and the scientific community. The central problem, Baltimore tells Science, is that “we had no authority to stop him,” which he says “is the dilemma in trying to police the international scientific world.”

At the summit’s end, the organizing panel, which had representatives from eight countries, concluded that He’s experiment was irresponsible, violated international norms, failed to meet ethical standards, did not have a sufficient medical justification, and lacked transparency. Their statement mirrored reactions in China.

The organizer’s statement noted the promise of heritable germline editing but said it still remained too risky. The statement disappointed some by not demanding a strict moratorium, instead calling for “a rigorous, responsible translational pathway toward such trials.” The meeting organizers pointedly noted that germline editing would require “strict independent oversight” but offered no specific recommendations for how that might be done.

Several commenters recalled the biology community’s response to the advent of genetic engineering in the 1970s, which at that time raised the specter of DNA-engineered microbes escaping from labs and wreaking havoc. Baltimore, who played a prominent role in the famed 1975 Asilomar conference on that topic, says the field figured out a way to control the use of recombinant DNA technology. “We never had any international authority, but we got international agreement, and, as far as I know everybody lived up to it.”

In the United States, NIH established a Recombinant DNA Advisory Committee (RAC) to oversee related work that received federal government support. It no longer reviews many proposals, but, Collins says, “It’s likely that a reinvented version” could serve as a public forum for “intense, scientific debate about an area of some scientific potential but where there are many unknowns—and this would certainly be one of them.”

James Wilson, who heads the gene therapy program at the University of Pennsylvania, suggests the U.S. Food and Drug Administration (FDA) could serve as an excellent oversight venue of the controversial research. But, he notes, the agency would have to forgo its many confidentiality restrictions and allow more public discussion of proposals.

For now, FDA is not even allowed to review germline editing experiments in humans. “It’s effectively prohibited in the United States,” says Harvard Medical School Dean George Daley, a stem cell researcher in Boston who was a summit organizer.

The summit triggered a discussion about whether the United Nations could serve as the home for an international oversight group, and its World Health Organization announced this week it would establish a team of experts to set guidelines and standards for human genome editing.

An immediate response is needed, Doudna stresses. “I’d love to see the national science academies from several countries within a month come up with a set of draft guidelines that would be somehow affiliated with a RAC-like body,” she says. Daley agrees. “We have to aspire to some kind of a universal agreement amongst scientists and clinicians about what’s permissible,” he says. “Those who violate those international norms are held out in stark relief.”

Whether He would have consulted with any oversight body is unclear. Several researchers say He discussed with them the idea of implanting edited human embryos. Porteus says when He informed him he was about to launch a trial to do that, “I spent the next 45 minutes telling him this was a terrible thing to do and he needed to stop immediately and talk to more people, particularly people in China. My regret is I didn’t go public.”

To others, He was more coy about his actions. “If I had any sense that he was actually trying to do this I would have organized a meeting with him and others,” says William Hurlbut, a physician and ethicist at Stanford who met with He a handful of times and corresponded regularly with him. “I was intentionally trying to slow him down and influence his thinking.”

Collins, Doudna, and many others say they have difficulty coming up with any genetic disorders that should even be considered for germline editing now. Couples who have concerns about passing on a disease mutation can use preimplantation genetic diagnosis (PGD), notes Collins, a procedure in which researchers can screen IVF embryos and implant only those without the mutation. Although there are instances where parents both have two copies of a disease gene and are certain to pass it on to all embryos, those are exceedingly rare, he adds.

Daley, part of a growing camp that strongly disagrees, counters that PGD doesn’t work 100% of the time. And, he says, “Rarity alone doesn’t detract from the imperative of trying to give medical support.”

Researchers discussing He’s feat frequently refer to the case of Martin Cline, a hematologist at UC Los Angeles who in 1980 conducted pioneering gene therapy research in other countries rather than wait for his own institution to approve his proposed studies. In the aftermath of intense media scrutiny, Cline resigned as chief of his school’s hematology-oncology division and lost several NIH grants. “I regret to say this, but I think the consequences of my experiment set the field back several years because of all the regulations and oversights,” says Cline, who is retired and living in Stinson Beach, California. Cline says he paid a high price for what he now sees as having moved too fast. “I lost a significant part of a career I loved,” says Cline, who switched to oncology.

Another human genome editing summit is planned for 2021. It will be hard to surpass Hong Kong’s drama. “One of our concerns was this was going to be a really boring summit,” Charo says. “Everything you look at here, the closer you get, the stranger this whole story becomes.”