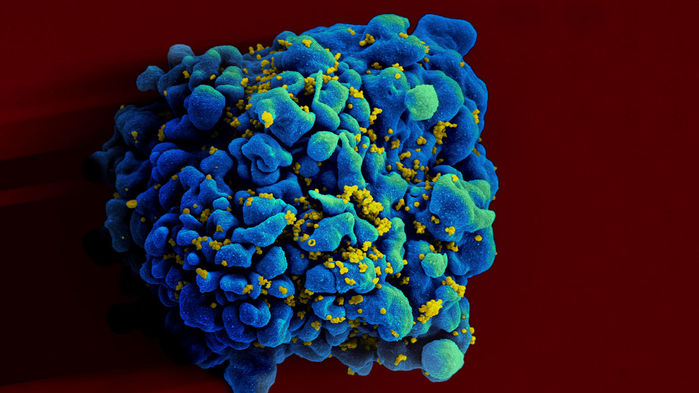 Can an immune strategy used to treat cancer also wipe out HIV infections?

Drugs work stunningly well to control HIV—but not in everyone, and not without side effects. That’s why a small cadre of patients known as elite controllers has long fascinated researchers: Their immune system alone naturally suppresses HIV for decades without drugs. Now one team, inspired by success in mice, hopes to endow HIV-infected people with tailormade immune cells that target HIV, in effect creating elite controllers in the clinic.

The immune strategy has risks, but it builds on increasingly popular cancer treatments with T cells engineered to have surface proteins, called chimeric antigen receptors (CARs), that can recognize markers on the surfaces of tumor cells and destroy the cancer. Such CAR T cells can also be tailored to identify and eliminate HIV-infected cells. This approach was tested in HIV-infected humans long before CAR T cells proved their worth against cancer, but it roundly failed. The field wants “to move what’s been learned from cancer back to HIV, completing the circle,” says Steven Deeks, an HIV/AIDS clinician at the University of California, San Francisco, who first tested a CAR T cell against the virus in the late 1990s.

The new study—conducted by researchers from the University of Pittsburgh in Pennsylvania; the biotech company Lentigen in Gaithersburg, Maryland; and the Albert Einstein College of Medicine in New York City—uses a far more sophisticated CAR approach than the one Deeks tested. “It’s promising and seems to be more potent than what’s been tried in the past,” says stem cell biologist Hans-Peter Kiem, who has tested CAR T cells in leukemia and lymphoma patients at the Fred Hutchinson Cancer Research Center in Seattle, Washington.

The team also gave near simultaneous injections of CAR T cells and HIV-infected human cells to the spleens of mice with a “humanized” immune system. (Rodents cannot normally be infected with the AIDS virus.) When the group harvested spleens from the mice a week later, five of six mice had no detectable HIV DNA and their average viral levels had dropped 97.5%.

The group tested several other variations of CAR T cells in subsequent mouse studies to find the best combination of components. Its hope is that these CAR T cells could turn more people into elite controllers. Over time it might even cure them.

In addition to putting genes for the CARs into the killer T cells—which are distinguished by the surface protein CD8—the researchers also modified CD4 T cells. CD4 cells, which regulate immune responses, are HIV’s favorite target, and their destruction is the hallmark of AIDS. The researchers found that the CD4 cells engineered to carry the CARs were highly resistant to HIV, probably because the CAR T binders disrupt the complicated infection process, in which HIV first connects to CD4 receptors and then attaches to a second receptor.Immunovirologist Harris Goldstein of Albert Einstein, who conducted the mouse studies, says the duoCAR T cells promise to overcome a problem that hampered similar efforts in the past: The virus can easily change regions of its surface protein and dodge recognition by the engineered killer cells. By simultaneously binding to multiple regions on this protein, the dual receptor approach “makes it far more difficult for HIV to mutate around the binders,” Goldstein says.

What works in a mouse or a test tube may not work in people, however, and CAR T cell treatment can be dangerous. “I’m not sure this is ready for patients without malignancies,” Kiem says. It requires toxic chemotherapy to kill some of a patient’s natural T cells to make “space” for the new ones to engraft. What’s more, in some cancer patients, CAR T cells have so supercharged the immune system that the treatment has destroyed organs.

Deeks hopes to run a small study of the new CAR T cells in HIV-infected people next year, using a minimal chemotherapy treatment beforehand. The study will enroll people who are controlling their infections with antiretrovirals, have them stop taking the drugs and see whether the infused CAR T cells can keep HIV suppressed. “CAR T cells are making massive advances in cancer, so there’s a huge rationale to expanding their use in the HIV cure effort,” Deeks says.

He acknowledges that the risks of CAR T cells may be less acceptable to HIV-infected people doing well on antiretrovirals than to cancer patients who have few other options. The upside is that if it works, they may be able to stop taking antiretrovirals for prolonged periods or perhaps forever—and they can always return to the drugs if it fails. Deeks is confident he’ll find people willing to take the gamble, if only to further research into a promising idea and help others living with the virus.