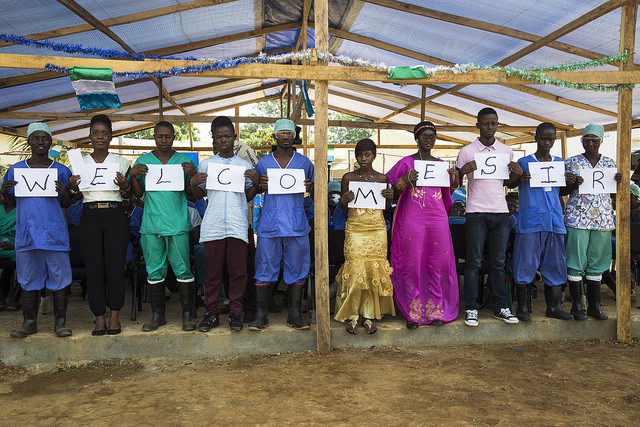 How to Stop Ebola

Last week, after six months of dawdling and ignoring repeated pleas fromDoctors Without Borders, also known as Médecins Sans Frontières, the world finally decided that the Ebola epidemic raging through West Africa demanded a massive, coordinated counterattack. First, President Barack Obamaannounced on Sept. 16 an enormous ramp-up of the U.S. government’s response, including sending in 3,000 military troops and redirecting $500 million from the Defense Department toward the effort. Two days later, the United Nations Security Council unanimously agreed that Ebola now “constitutes a threat to international peace and security” and demanded an urgent response from member states. Severalother countries pledged to send in more supplies and health care workers, as nongovernmental organizations like Partners in Health joined MSF to build clinics and provide care.

If each patient had five close contacts, that would mean finding and monitoring 90,000 people for 21 days.

But talking the talk and walking the walk—or in this case, running the run—are critically different things. New cases of Ebola in Liberia, Sierra Leone, and Guinea are doubling every three weeks. Officially reported cases to date number nearly 6,000, with about half dying, and the U.S. Centers for Disease Control and Prevention estimates that the actual figures likely are triple that because so many infected people never seek care. CDC modelers suggest in a new publication that if words don’t lead to action and nothing changes, 1.4 million people could be infected by mid-January 2015. Simple math suggests that slowing the spread will require an emergency health care response unlike anything the world has ever mounted.

To stop the spread of infection first requires isolating all infected people. According to a report by the World Health Organization that appeared online Tuesday in the New England Journal of Medicine, these three West Africa countries during the week of Sept. 8 collectively had 995 patients who were known to need care, yet they had a total of only 610 beds.

Read the original article on Slate.

The second cornerstone of containment efforts is contact tracing, which requires testing all people who came in close proximity to each infected person—and then following them for 21 days. Take the worst-case scenario and say 18,000 cases have occurred to date and 18,000 new transmissions will occur during the next three weeks. Leaving aside the demand on Ebola treatment units to provide isolation rooms and beds for the infected, if each patient had five close contacts, that would require finding and monitoring 90,000 people for 21 days.

Making all of this happen—and happen quickly—will require extraordinary organization. U.N. Secretary-General Ban Ki-moon said at the Security Council meeting last week that the affected countries “have asked the United Nations to coordinate the global response” and announced a new U.N. Mission for Ebola Emergency Response. “We are committed to do what is needed, with the speed and scale required,” Ki-moon insisted.

The U.S. government, which has the largest single effort of any country, has several chefs in the kitchen. “We’re prepared to take leadership on this to provide the kinds of capabilities that only America has, and to mobilize the world in ways that only America can do,” says Obama. But what does that mean? Army Maj. Gen. Darryl Williams runs a military command center in Monrovia, Liberia’s capital. The U.S. Agency for International Development technically directs the efforts of the Department of Defense and U.S. government agencies through its Disaster Assistance Response Team, which includes groups ranging from branches of Health and Human Services such as the CDC and the National Institutes of Health to the Forest Service. At a Senate hearing on Ebola last week, Tom Harkin, D-Iowa, said he was “kind of startled” to find out that no single point person was running the show.

Ideally, a command center would exist that allowed responders and countries in need to document in real time who was on the ground in which locations and what supplies were available. This would include numbers of health care workers and other responders needed and on the ground, available transportation, and inventories and shortages of essential items like personal protection equipment, hospital beds, Ebola test kits, rehydration fluids, thermometers, and body bags.

If such a centralized command center has been created, it’s out of the public eye—and it should not be. Transparency will push people to work together and compel organizations to move as rapidly as possible to fulfill commitments. It also will clarify what’s actually being done and where the gaps remain. If this is war—and  Sen. Lamar Alexander, R-Tennessee, suggested at the Senate hearing that the U.S. “must take the deadly dangerous threat of the Ebola epidemic as seriously as we take ISIS”—then move to a wartime footing and do everything possible to reduce suffering and crush the enemy.

With the same spirit of pulling out all the stops, extraordinary measures have been proposed to care for the sick and to prevent transmissions. One of the most immediately doable suggestions involves the few thousand people who have become infected during this epidemic and recovered. As far back as 431 B.C., the Athenian historian Thucydides recognized that people who survived the plague made for excellent caregivers. As Thucydides wrote: “It was with those who had recovered from the disease that the sick and the dying found most compassion. These knew what it was from experience, and had now no fear for themselves; for the same man was never attacked twice—never at least fatally.”

People who survived Ebola may have developed immunity to that strain and could care for the infected.

Nicole Lurie, HHS’ assistant secretary for preparedness and response, is one of several doctors who suspect that people who survived Ebola may have developed immunity to that strain of the virus and could care for the infected with little risk to themselves. Lurie suggests that in these West African countries, where jobs are hard to find and Ebola carries such serious stigma with it that survivors sometimes are shunned, training survivors could be a win-win. “It’s a very important question and something we’ve had lots of discussion about,” says Lurie. A consultation of experts held by the World Health Organization earlier this month, also suggested that blood from survivors could be used to treat infected people.

While experimental treatments like convalescent serum may help, the epidemic urgently needs more basic medical care for the infected. The current case fatality rate estimated in the New England Journal of Medicine report this week is 70.8 percent. Michael Callahan of Massachusetts General Hospital, who has treated Ebola patients and helps the U.S. government coordinate its medical response, says that could drop to as low as 40 percent with existing “field viable” therapies like nasogastric tubes, aggressive correction of fluid levels and electrolytes, simple nutrition, and drugs that control vomiting and combat bacterial infections.

On the more distant front, high-tech treatments and vaccines might help “bend the curve” of the epidemic if they prove safe and effective in small studies and then can be produced in large enough quantities. Two vaccines have moved into small-scale human trials and, if no serious side effects take place and they stimulate immune responses that mirror the ones capable of protecting monkeys in laboratory experiments, they could be offered to health care workers as early as November. But manufacturers estimate they will only have about 10,000 doses ready by the end of the year.

Offering the vaccine to doctors, nurses, and other first-line responders may help keep them alive and attract more people to these dangerous jobs, but even the rosiest predictions do not suggest this will directly slow spread through communities. Some are calling for the world to build a stockpile of these vaccines as quickly as possible as an insurance policy. But even an all-out effort to ramp up vaccine might only be able to produce a million doses in nine months. And that would require a commitment of manufacturing plants and tens of millions of dollars that no one has yet made.

Further out on the horizon are treatments like the antibody cocktail ZMapp, which has made some in the media go ga-ga. A drug that interferes with the viral RNA made by Tekmira similarly has stock chat rooms quivering with excitement. Maybe a dozen patients have received these two treatments under compassionate-use agreements that by definition do not attempt to prove whether they work. Neither has yielded a speck of clinical data to suggest they have helped anyone. Both have great promise. But most drugs that enter humans, for safety or efficacy reasons, never make it to the pharmacy shelf, and these both have production challenges that mean, like vaccines, they will remain in extremely short supply for the foreseeable future.

In the spring of 1983, not even two years into the AIDS epidemic, activist and playwright Larry Kramer wrote a now famous essay for the New York Native called “1,112 and Counting.” Kramer’s rage about the inaction and confusion that surrounded the emergence of that plague made him the Ranter in Chief, and his fury almost ignited the page. “If this article doesn’t scare the shit out of you, we’re in real trouble,” he bellowed. “I am angry and frustrated almost beyond the bound my skin and bones and body and brain can encompass. My sleep is tormented by nightmares and visions of lost friends, and my days are flooded by the tears of funerals and memorial services and seeing my sick friends. How many of us must die before all of us living fight back?” HIV/AIDS has killed 36 million people to date.

Today, similar impassioned, heartwrenching, incendiary wails are coming from people in West Africa. It’s 2,803 and Counting. That’s how many people have died from Ebola, said the WHO’s Situation Report on Monday. And if the living are going to bend the curve and end this Ebola epidemic as quickly as possible, we need more Ranters in Chief holding feet to the fire, incessantly making sure that governments and the U.N. and nongovernmental organizations and foundations have kept their promises, that able countries cannot lay low without feeling shame for not contributing more, and that the world hears the furious and frightened voices of the growing number of Larry Kramers who are watching the clock ticking and counting each minute, hour, day, and week lost in the race against a fleet-footed virus that knows all about killing time.