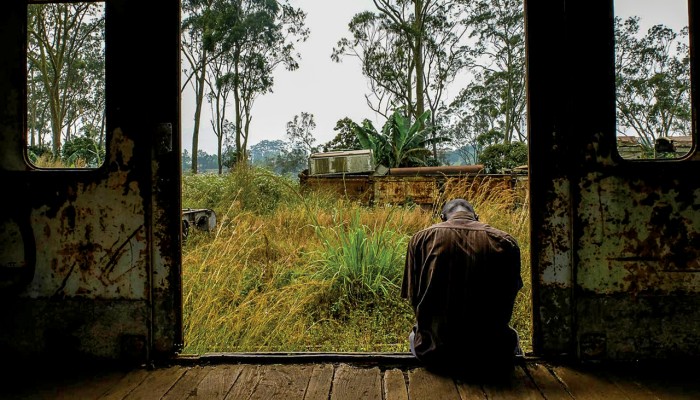 Before falling into disrepair after independence, the extensive rail network in the Democratic Republic of the Congo likely spread HIV. PHOTO: CARL GIERSTORFER

Sometime around the early 1900s, the virus that sparked the AIDS epidemic likely spread from a chimpanzee to a human in southeastern Cameroon. In roughly 1920, someone infected with it traveled down the Sangha River and its tributaries from Cameroon to Léopoldville, today known as Kinshasa, the capital of the Democratic Republic of the Congo (DRC). A report on page56 spells out what happened next: how and when HIV left Kinshasa and spread through Central Africa in the first stage of an epidemic that less than a century later has infected nearly 75 million people worldwide.

The work, which highlights how Africa’s rail network probably helped spread the virus, also proposes why one particular version of HIV far outpaced others. “There were lots of different factors,” says study leader Oliver Pybus of the University of Oxford in the United Kingdom, who specializes in the evolution of infectious diseases. “Basically this one was at the right time and the right place—and it hit the jackpot.”

Previous studies have looked at differences between simian and human immunodeficiency viruses to piece together HIV’s very early history, including its origin in Cameroon. Basically, HIV’s initial emergence has become clear by comparing chimpanzee counterparts with traces of the AIDS virus uncovered in archived tissue or blood samples from as early as 1959 in Léopoldville.

While some researchers continue to search for even older human tissue samples containing HIV, the new analysis relies exclusively on information already deposited in the HIV Sequence Database maintained by the Los Alamos National Laboratory in New Mexico. The initial goal of the study was to address a little-appreciated curiosity about the AIDS virus. Researchers have documented 13 different cases in which a simian immunodeficiency virus has jumped from monkeys, chimpanzees, or gorillas into humans. But only the virus known as HIV-1 group M (for “major”) traveled far and wide and created an epidemic. What gave it the advantage?

Looking for an answer, Pybus and colleagues examined the genetics of HIV samples from various African locations over the past half-century. They started with 348 samples of group M viruses from the former Belgian Congo, renamed Zaire and then DRC, and 466 more from neighboring countries. Then they used the relatedness of the sequences to create family trees, or phylogenies. Next they applied a “molecular clock”—the known rate at which retroviruses such as HIV mutate—to date the origin of each tree and its branches.

The new analysis confirms that HIV sequences have a common ancestor dating back to about 1920, as the earlier studies suggested. “It’s really nice that a new group of investigators has worked on this using the most cutting-edge molecular phylogeographic methods and come up with the same conclusions,” says Beatrice Hahn, a virologist at the University of Pennsylvania who has done pioneering studies of HIV’s origins.

After it reached Kinshasa, the new study suggests that trains played a major role in helping the virus, reaching Lubumbashi (then Elisabethville) around 1937 and Mbuji-Mayi (then Bakwanga) 2 years later. (This level of precision comes from comparing the many HIV sequences from both of those locations in the Los Alamos database with other HIV sequences from different times and places.) Although earlier analyses had assumed HIV expanded its range mainly with the help of riverboats, Pybus and co-workers note that Mbuji-Mayi and Lubumbashi were major mining centers, connected to other parts of the country by rail lines that carried hundreds of thousands of passengers per year until they fell into disrepair after independence.

Jacques Pépin, a co-author of the paper and an epidemiologist at the University of Sherbrooke in Canada, says the apparent role of the railway surprised him. “When I lived in Zaire in the early 1980s, the railway system had already largely collapsed, nowhere to be seen,” says Pépin, who in 2011 published a book, The Origins of AIDS. Pépin and colleagues think Mbuji-Mayi and Lubumbashi may have historical collections of tissue and blood samples that could add more detail about group M’s early years. They suspect, for example, that Mbuji-Mayi is the birthplace of one variant of group M, known as subtype C. That subtype spread widely on the continent because of migrant labor and today accounts for roughly half of the infections in sub-Saharan Africa.

Another variant, subtype B, which accounts for most HIV infections in the United States and Europe, surfaced in Kinshasa around 1944, the new study shows. It also bolsters earlier assertions that the subtype infected Haitian professionals who came to DRC in the ’60s and then carried it home in about 1964.

From 1920 to 1960, group M and an outlier group of HIV variants designated “O,” which is largely restricted to Cameroon, spread at similar rates, the paper finds, but then group M’s growth rate nearly tripled. The researchers contend that group M’s sudden success outpaced the rate of population growth in Kinshasa, so that cannot explain why it shot ahead of group O. They suggest instead that commercial sex workers in Kinshasa had more clients than those elsewhere or that public health campaigns there—maybe directed at sexually transmitted diseases—did not properly sterilize injection equipment. Neither idea is based on hard data, but the researchers do present intriguing evidence for the injection scenario: A study led by Pybus last year reported that men in DRC older than 50 years were far more likely to have been infected with hepatitis C virus, which readily spreads through contaminated needles.

Michael Worobey, an evolutionary biologist at the University of Arizona in Tucson who has published extensively on HIV’s origins, calls the new work “technically brilliant” but stresses that there are still more mysteries to solve. “I don’t think this paper nails down the different experiences of group O and group M viruses,” Worobey says. He’s particularly doubtful that unsterilized injection equipment played a key role in the initial spread, noting that the public health campaigns in colonial Congo date back to long before group M took off.

Still, Worobey says it’s “miraculous” that studies continue to clarify the origin of the AIDS epidemic. “Who would have thought that if you just lined up all the ACTGs of DNA sequences from this virus found in people over different time points you could tell what was happening in colonial Africa and how this thing unfolded?” he asks.