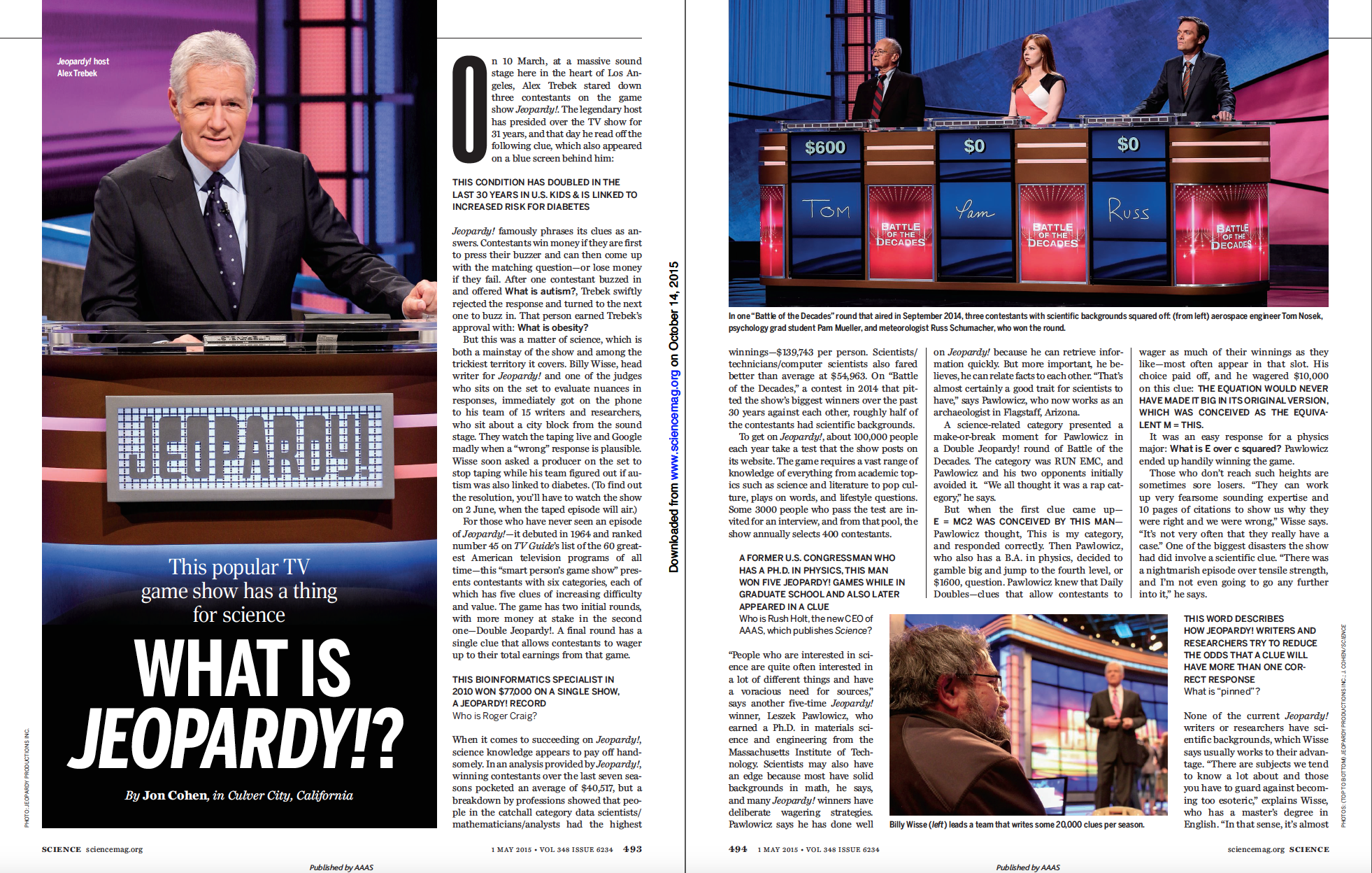 This popular TV game show has a thing for science

On 10 March, at a massive sound stage here in the heart of Los Angeles, Alex Trebek stared down three contestants on the game showJeopardy!. The legendary host has presided over the TV show for 31 years, and that day he read off the following clue, which also appeared on a blue screen behind him:

THIS CONDITION HAS DOUBLED IN THE LAST 30 YEARS IN U.S. KIDS & IS LINKED TO INCREASED RISK FOR DIABETES

Jeopardy! famously phrases its clues as answers. Contestants win money if they are first to press their buzzer and can then come up with the matching question—or lose money if they fail. After one contestant buzzed in and offered What is autism?, Trebek swiftly rejected the response and turned to the next one to buzz in. That person earned Trebek’s approval with: What is obesity?

But this was a matter of science, which is both a mainstay of the show and among the trickiest territory it covers. Billy Wisse, head writer forJeopardy! and one of the judges who sits on the set to evaluate nuances in responses, immediately got on the phone to his team of 15 writers and researchers, who sit about a city block from the sound stage. They watch the taping live and Google madly when a “wrong” response is plausible. Wisse soon asked a producer on the set to stop taping while his team figured out if autism was also linked to diabetes. (To find out the resolution, you’ll have to watch the show on 2 June, when the taped episode will air.)

For those who have never seen an episode of Jeopardy!—it debuted in 1964 and ranked number 45 onTV Guide‘s list of the 60 greatest American television programs of all time—this “smart person’s game show” presents contestants with six categories, each of which has five clues of increasing difficulty and value. The game has two initial rounds, with more money at stake in the second one—Double Jeopardy!. A final round has a single clue that allows contestants to wager up to their total earnings from that game.

THIS BIOINFORMATICS SPECIALIST IN 2010 WON $77,000 ON A SINGLE SHOW, A JEOPARDY! RECORD

Who is Roger Craig?

When it comes to succeeding on Jeopardy!, science knowledge appears to pay off handsomely. In an analysis provided by Jeopardy!, winning contestants over the last seven seasons pocketed an average of $40,517, but a breakdown by professions showed that people in the catchall category data scientists/mathematicians/analysts had the highest winnings—$139,743 per person. Scientists/technicians/computer scientists also fared better than average at $54,963. On “Battle of the Decades,” a contest in 2014 that pitted the show’s biggest winners over the past 30 years against each other, roughly half of the contestants had scientific backgrounds.

In one “Battle of the Decades” round that aired in September 2014, three contestants with scientific backgrounds squared off: (from left) aerospace engineer Tom Nosek, psychology grad student Pam Mueller, and meteorologist Russ Schumacher, who won the round.

To get on Jeopardy!, about 100,000 people each year take a test that the show posts on its website. The game requires a vast range of knowledge of everything from academic topics such as science and literature to pop culture, plays on words, and lifestyle questions. Some 3000 people who pass the test are invited for an interview, and from that pool, the show annually selects 400 contestants.

A FORMER U.S. CONGRESSMAN WHO HAS A PH.D. IN PHYSICS, THIS MAN WON FIVE JEOPARDY! GAMES WHILE IN GRADUATE SCHOOL AND ALSO LATER APPEARED IN A CLUE

Who is Rush Holt, the new CEO of AAAS, which publishes Science?

Billy Wisse (left) leads a team that writes some 20,000 clues per season.

“People who are interested in science are quite often interested in a lot of different things and have a voracious need for sources,” says another five-time Jeopardy! winner, Leszek Pawlowicz, who earned a Ph.D. in materials science and engineering from the Massachusetts Institute of Technology. Scientists may also have an edge because most have solid backgrounds in math, he says, and many Jeopardy! winners have deliberate wagering strategies. Pawlowicz says he has done well on Jeopardy! because he can retrieve information quickly. But more important, he believes, he can relate facts to each other. “That’s almost certainly a good trait for scientists to have,” says Pawlowicz, who now works as an archaeologist in Flagstaff, Arizona.

A science-related category presented a make-or-break moment for Pawlowicz in a Double Jeopardy! round of Battle of the Decades. The category was RUN EMC, and Pawlowicz and his two opponents initially avoided it. “We all thought it was a rap category,” he says.

But when the first clue came up—E = MC2 WAS CONCEIVED BY THIS MAN—Pawlowicz thought, This is my category, and responded correctly. Then Pawlowicz, who also has a B.A. in physics, decided to gamble big and jump to the fourth level, or $1600, question. Pawlowicz knew that Daily Doubles—clues that allow contestants to wager as much of their winnings as they like—most often appear in that slot. His choice paid off, and he wagered $10,000 on this clue: THE EQUATION WOULD NEVER HAVE MADE IT BIG IN ITS ORIGINAL VERSION, WHICH WAS CONCEIVED AS THE EQUIVALENT M = THIS.

It was an easy response for a physics major: What is E over c squared? Pawlowicz ended up handily winning the game.

Those who don’t reach such heights are sometimes sore losers. “They can work up very fearsome sounding expertise and 10 pages of citations to show us why they were right and we were wrong,” Wisse says. “It’s not very often that they really have a case.” One of the biggest disasters the show had did involve a scientific clue. “There was a nightmarish episode over tensile strength, and I’m not even going to go any further into it,” he says.

THIS WORD DESCRIBES HOW JEOPARDY! WRITERS AND RESEARCHERS TRY TO REDUCE THE ODDS THAT A CLUE WILL HAVE MORE THAN ONE CORRECT RESPONSE

None of the current Jeopardy! writers or researchers have scientific backgrounds, which Wisse says usually works to their advantage. “There are subjects we tend to know a lot about and those you have to guard against becoming too esoteric,” explains Wisse, who has a master’s degree in English. “In that sense, it’s almost easier to write science categories than something I’m more familiar with.” But the flip side is that when the writers do not intimately know a subject, what they deem the “natural” response may have an equally valid alternative that slips under their pregame radar.

What are neutron stars?

Neutron stars was the “right” response, but when this clue aired as a Daily Double in 1999, one of the three contestants, who had wagered $1900, offered a response—What are quark stars?—that Trebek rejected. After some quick checking by Wisse and his team, however, the host had to offer a rare mea culpa. “Although there is very little known about quark stars, they do exist, and that is a correct response, given the way we phrased that clue,” Trebek conceded. The contestant received a $3800 boost and moved into the lead (but ultimately lost).

Wisse and his crew must produce nearly 20,000 carefully sourced clues to fill the 230 shows that air each season. In Jeopardy! speak, the writers rank clues as 1, 2, 3, 4, or 5; they dismiss ideas that are too easy as a 1/2 and too hard as a 14. “If there’s something people know, we will do it to death,” Wisse says. “We’ve given them Watson and gone for Crick and given them Crick and gone for Watson.” In the Battle of the Decades, they asked the name of the lab where Watson and Crick worked, which turned out to be a “triple stumper”—a veritable 14—as no one even guessed Cavendish Lab.

JANE GOODALL, NOBELIST DAVID BALTIMORE, AND THE LARGE HADRON COLLIDER AT CERN HAVE SHARED THIS MOST UNUSUAL TV EXPERIENCE

What is appearing in a Jeopardy! video clue?

In one of its most popular scientific gambits, Jeopardy! in 2011 pitted champions against an IBM supercomputer system, dubbed Watson, that was programmed to play the game. Along with a vast database of information, Watson had the advantage of speed, says Jeopardy! champion Russ Schumacher, a meteorologist at Colorado State University, Fort Collins. “Watson’s buzzer timing was not human,” Schumacher says. The supercomputer won that contest. But a few weeks later, Holt was one of five members of Congress who competed against Watson in an untelevised Capitol Hill showdown. Holt beat the computer. “I think Watson was having a low voltage night,” he said at the time.

JEOPARDY! CONTESTANTS USE THIS INTONATION PATTERN FAR MORE FREQUENTLY WHEN THEY HAVE AN INCORRECT RESPONSE, AND WOMEN USE IT MORE THAN MEN OVERALL

Researchers have published several studies of Jeopardy! over the years (see http://scim.ag/jeopaRdy), including one by a sociologist who analyzed vocal intonations in 5473 responses from 300 contestants. As he reported 2 years ago in Gender & Society, 48% of women and 27% of men used uptalk when they had the correct response to a clue, but 76% of females and 57% of males uptalked when they were wrong. Another Jeopardy! study focused on smart wagering strategies in the final round and ran inMathematics Magazine in 1994.

But more science goes into Jeopardy! than emerges from it. Take bioinformaticist Roger Craig and his big win. Before he made it onto the show, Craig downloaded J! Archive (http://j-archive.com/), an online site made by Jeopardy! fans that to date has cataloged more than 280,000 clues and responses and analyzed the relationship between high dollar amount questions and topics. This allowed Craig to see trends—for example, questions about astronomy most often appear in Double Jeopardy!, when the clues are worth more money—and focus on increasing his knowledge in high value areas. (A video where he describes his analysis is at http://scim.ag/jeopaRdy) “It wasn’t like I sat down one day and said I want to reverse engineer the game and crush it,” Craig says. “I just did a little experiment here and it led to another. That’s how science works.”

In his first game, a category called ELEMENTAL CLUES beckoned him, because his extensive preparation had shown chemistry was his strongest subject. “I had told my friends if I ever get a Daily Double on the periodic table, I’m going to bet it all,” he says. Craig hit a Daily Double and wagered the entire $12,000 he had amassed.

Craig would go on to win the game—and four others taped that same day. But he says this four-letter, nonscientific factor also helped him, as it has all big winners.