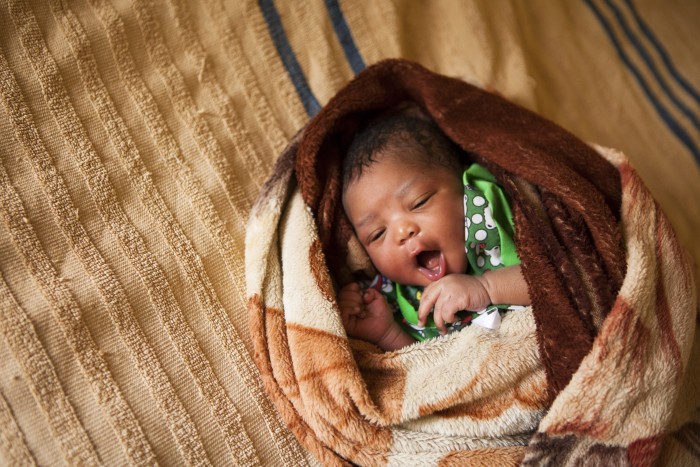 Credit: Colin Crowley, Save the Children

Belly Button Gel Could Save Thousands of Newborns

One Friday night in the summer of 2012, Pauline Williams, glass of wine in hand, was surfing the web when she had an “aha moment.” Williams, head of research and development for maternal and neonatal health at GlaxoSmithKline (GSK) in London, was looking for ways that GSK could make more of a difference in the developing world. In The Lancet, she found three papers that convincingly showed how chlorhexidine, an antibacterial, prevented infection of the umbilical cord stump in newborns and prevented deaths. Williams went into her bathroom to doublecheck her hunch: Corsodyl, a GSK-made mouthwash, had chlorhexidine as a key ingredient. “I thought, crikey.”

GSK announced today that it’s applying to the European Medicines Agency for approval of a chlorhexidine gel formulated specifically for use on umbilical cords of newborns in developing countries. The gel, which has a far higher concentration of chlorhexidine than used in the mouthwash, is heat stable and packaged in sachets that resemble ketchup packets used in fast-food restaurants. Studies have show that the gel is more acceptable to people and easier to apply to the stump than chlorhexidine in a solution.

“It’s really exciting,” says Gary Darmstadt, a pediatrician at Stanford University in California, who was part of a team that first showed the promise of chlorhexidine on cord stumps in a Nepal study published in The Lancet in 2006. “I’m personally just so thrilled to see GSK working in this way.” (Darmstadt, who was not involved with the product’s development, is on the board of a partnership between GSK and Save the Children.)

Most developed countries practice what’s called “dry cord care” with newborns, meaning that the cut umbilical stump is simply allowed to fall off without any treatment. But in developing countries, women often give birth at home in unhygienic conditions; agents likeStaphylococcus aureus and Escherichia coli can easily enter the stump and cause infections, sometimes with fatal consequences. Also, in many cultures the cord stump is traditionally dressed with cow dung, lizard droppings, ash, or mustard oil in hopes of speeding its healing, which can further increase the risk, Williams says. Chlorhexidine, she notes, is a widely used, safe antiseptic that has been around “for donkey’s years.”

The study in Nepal, combined with similar large, controlled trials in Bangladesh and Pakistan, showed that application of chlorhexidine to the stump reduced neonatal mortality by 23%. The trials compared chlorhexidine to applying soap and water, simple handwashing, and dry cord care. On the basis of these encouraging results, the World Health Organization put chlorhexidine for umbilical cord care on its List of Essential Medicines for Children in 2013. According to a U.N. Commission on Life-Saving Commodities for Women and Children report, wide use of the antiseptic for cord care could save the lives of an estimated 422,000 newborns over 5 years.

Of course the gel will only work if people use it, and Darmstadt acknowledges that cultures often cling tightly to their traditions. “While you definitely would not want cow dung applied with chlorhexidine, it certainly is a whole lot better than no chlorhexidine,” he says. For the gel to be most effective, he says, education campaigns and behavior change programs will have to be launched.

If approved, GSK plans to sell chlorhexidine gel at a not-for-profit price, and Williams says the company hopes to transfer its technology to local manufacturers. “Our ultimate success will be when we don’t need to make it anymore,” Williams says.