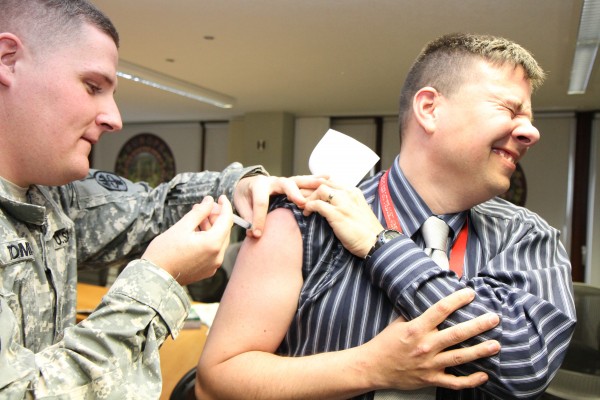 How to identify a bad vaccine reaction before it happens

Imagine if you knew you were going to have side effects from a vaccine before you got it. It might dissuade you from getting the shot—but it might also ease your mind to know ahead of time what to expect. That’s the promise of a new study, which has found a unique set of signals in the immune cells of people who later developed inflammation, headaches, fevers, and other “adverse events” after receiving a flu shot.

The work and other similar, recent studies could also help “redefine” how vaccines are developed to make them more effective and less likely to have side effects, says Wayne Koff, the chief scientific officer at the International AIDS Vaccine Initiative in New York City, who was not involved with the research.

The study focused on a flu vaccine designed to protect against an unusual strain that originated in pigs and caused a pandemic in 2009. The investigators monitored the immune responses of 178 people in the United Kingdom before and after they received the vaccine.

Some 20% of the participants reported medium to high levels of minor side effects, all of them transient. To see whether these reactions have a genetic basis, the researchers looked at a wide array of immune system genes. They assessed which genes were turned on, or “expressed,” before and after the flu shot.

People who reported higher levels of side effects had higher levels of expression of genes affiliated with B cells, which make antibodies, both before and after receiving the vaccine. The findings, reported online today in Nature Immunology, are “wholly unexpected,” says immunologist Adrian Hayday of King’s College London, who led the study. As Hayday explains, his team looked at myriad genes expressed in blood samples, most of which were not related to B cells. The researchers also found different gene expression patterns after the flu vaccination in younger and older people. That may be because people over 40 were more likely to have had been exposed to a related swine flu virus, which altered their immune responses.

A closer analysis of people who had more side effects revealed that they had larger numbers of a type of a B cell that is linked to autoimmune reactions. (Although B cells typically produce antibodies that thwart invaders, some lineages produce antibodies that attack body tissues.) The team was not able to unravel the mechanism that tied these B cells to vaccine side effects. But they stress that vaccination did not actually boost the number of these potentially harmful B cells—contrary to the fears of some people who denounce vaccines and claim that they cause immunological mayhem.

Unlike drugs that treat ailments, vaccines are administered to otherwise healthy people to protect them from future illnesses—so people logically are more concerned about side effects from vaccines than from drugs. Hayday says it may well help quell concerns about vaccines if people know ahead of time that they’re prone to have a mild reaction. “Vaccines do make a number of people feel sick, and it’s much more likely we’ll get compliance if we can say to those people, ‘Don’t worry about it, nothing lasting will happen, and the quid pro quo is you’ll develop lasting immunity to the disease.’”

The findings may help improve designs of future vaccines, and they could influence the red-hot field of cancer immunotherapy, which is struggling to figure out why treatments succeed remarkably in some patients and fail in others. “We are moving helter skelter toward a massive application of cancer immunotherapeutics, and we have to understand a lot better what is underpinning the variability of responsiveness so that we can apply those therapies in a rational and grounded way,” Hayday says.

The new work “has identified interesting hypotheses that could be assessed in larger, more controlled studies,” says Koff, who has recently spearheaded the development of a public-private partnership known as the Human Vaccines Project that aims to use similar tools to fine-tune vaccines for infectious diseases and cancers. “The tools are now available, both in immune monitoring and big data analyses to probe the human immune system in ways which never could be done before.”