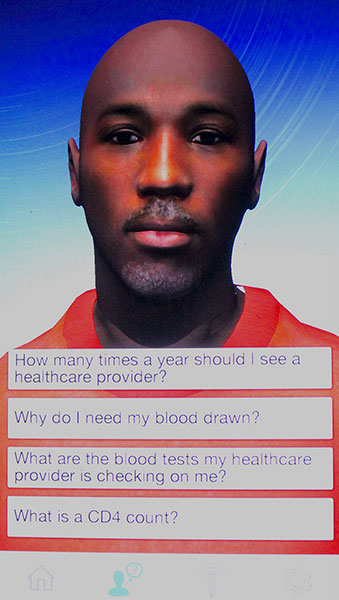 “Are you afraid to take your meds?” asks the virtual African-American man on the iPhone screen. “I get that. Like people are telling you you’ve got to take medicines for the rest of your life, and it’s like, ‘Can’t these make me sick?’ But let’s keep it real, OK? This medicine can save your life.”

The app, which its developer fittingly demonstrated to me in an Uber on the way to the International AIDS Conference being held in Durban, South Africa, this week, is called Battery Health—but it has nothing to do with a smartphone’s charge. Instead, researchers hope it will help African-American, HIV-infected men who have sex with men stay on their treatment plans. That population has the highest HIV prevalence and new infection rates in the United States.

Black American HIV-infected men who have sex with men often start on antiretroviral treatment but don’t stick with it because of the stigma of having the disease, lack of knowledge about its dangers, or the belief that there’s nothing they can do about it, says the app’s developer, epidemiologist Mark Dworkin of the University of Illinois, Chicago. “This app was created to try and teach them things they may not know, motivate them to make behavioral change, and make them aware of behavioral skills they may lack.”

Dworkin created the app by gathering African-American HIV-infected men who have sex with men in focus groups and discussing the common treatment questions they wanted answers to and the appropriate language the app should use in responding. Say you’re thinking about stopping your meds for a while, don’t understand what a CD4 count is, or don’t know why your blood needs to be drawn again. Each of these questions appears on the screen, and tapping one leads the avatar to offer detailed answers, some that include more questions that branch into even more complex responses.

Battery Health has an icon of a battery with a lightning bolt to disguise its purpose, Dworkin says. “Focus groups told us that they wanted an icon that would attract no interest at all from others because ‘people are always getting in their business.’”

It’s a “stigma free” way for men in this population to get HIV/AIDS information, says epidemiologist Jeffrey Klausner of the University of California, Los Angeles, who was not involved with the work. “It’s that kind of innovation that could impact the low rates of HIV treatment in [these men] in the U.S.”

After the app development is completed this fall, Dworkin plans to run a clinical trial to assess whether it can help people improve their adherence to medication and blood tests. Battery Health also allows people to input their health stats like level of HIV in their blood and number of CD4 cells, the lymphocytes that the virus targets and destroys. The app then charts the data in graphs.

Dworkin and his team made the app with a research grant from the U.S. National Institutes of Health, and ultimately plan to make it freely available.