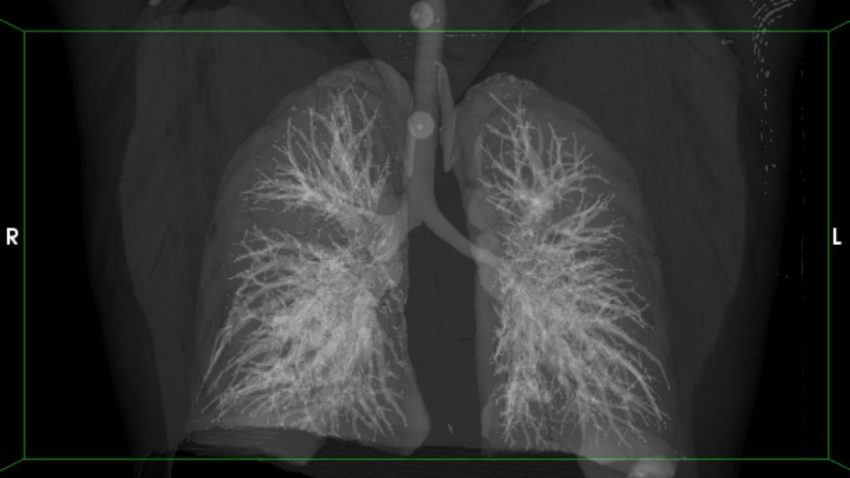 Better views of TB lungs may save lives and stop spread

High-tech images of the lungs of people with “latent” tuberculosis (TB) identified those at risk of developing symptoms. The new work, which researchers presented in a special TB session at the 21st International AIDS Conference being held in Durban, South Africa, this week, suggests new ways to evaluate whether treatment has cured an infection. But it could also upend the conventional wisdom that billions of people are walking around with dormant TB in their lungs that could one day erupt in full-fledged disease.

“Active” TB kills an estimated 1.5 million people annually, but the World Health Organization (WHO) believes that fully one-third of the world’s population has latent TB, which means thatMycobacterium tuberculosis can’t be cultured from their sputum, but their immune cells still release interferon-gamma if mixed with pieces of the microbe. A skin test called “delayed type hypersensitivity” also is widely used to determine latency. Only about 10% of these people will develop TB at some point in their lives, and one of the big challenges in TB control is that there is no way to tell who is at risk. X-rays of latent patients’ lungs show nothing abnormal. WHO recommendations call for treating HIV-infected people who have latent TB with one drug, isoniazid, as a prophylaxis, but that’s often not done.

In the new study, scientists used more sophisticated techniques to look at the lungs of 35 HIV-infected people from South Africa who had latent TB, according to the standard tests. One scan used computed tomography (CT), which shows the anatomy of the lung in far greater detail than an x-ray; the other is a positron emission tomography (PET) scan that uses an injection of radioactive glucose, which is taken up by metabolically active cells and indicates the presence of M. tuberculosis.

Ten people had clear “hot” nodules in their lungs. “We saw pretty magnificent manifestations of disease,” says Clifton Barry, who heads TB research at the U.S. National Institute of Allergy and Infectious Diseases in Bethesda, Maryland, and also has a lab at the University of Cape Town (UCT) in South Africa. (Barry’s team performed the work with Rob Wilkinson’s group at UCT.) The team saw no hot spots in the lungs of the other 25 patients.

The researchers planned to put everyone in the study on isoniazid. But in the few weeks between the scans and when treatment began, four of the 10 patients with hot spots or abnormal CT scans developed TB symptoms, and M. tuberculosis showed up in the sputum of two others. In essence, the scans had revealed the people who were about to become sick and had a pressing need for the full-fledged TB treatment—three different drugs taken for 6 months. “The data are really compelling,” says David Russell, a TB researcher at Cornell University. “There’s nothing out there with that resolution.”

The researchers continued to do lung scans during the treatment period, and they showed the lung abnormalities dissolving, which means they could use the technique to analyze treatment efficacy. “For many of us, this opened a new door of thinking about whether we really need to treat for six months,” says Jens Lundgren, an infectious disease specialist at the University of Copenhagen. “This is really a very exciting area for personalized medicine if we can separate those who can have a shorter period of treatment.” That would be welcome, because the standard regimen is a challenge for many patients.

Although the TB in these 10 people was far from “latent,” Barry says, he is convinced that many, if not most, of the other 25 people, did not have any TB. He suspects they only had interferon gamma responses to M. tuberculosis because their immune systems had cleared the microbe at some time in the past. “It’s wrong to say that one third of the world has latent TB,” Barry says. “That number makes great starts for scientific papers but it’s totally misleading.”

Lucica Ditiu, who leads the Stop TB Partnership, a nonprofit in Geneva, Switzerland, agrees that “latent” is not an accurate term. “These data are extremely interesting and something we should push forward,” Ditiu says.

Unfortunately, CT and PET scans are very expensive, Barry acknowledges, and it would be impractical to screen the more than 2 billion people, most of them in poor countries, who meet the definition of latent TB. But the scans could be very useful in research, he says, for instance in early tests of new TB drugs to see which ones deserve large-scale efficacy studies. Wilkinson also found a possible alternative way to identify people with active infection. He did a so-called transcriptome analysis that compared the immune genes that were turned on in the 10 people who had hot spots and the 25 who did not. Six “biomarkers” surfaced that theoretically might identify those people who are most likely to develop symptomatic disease and transmit the infection. (Other labs recently have identified transcriptional biomarkers, too.)

Barry notes that on average, each person who has an active M. tuberculosis infection transmits the pathogen to 10 others. “If we can identify people with subclinical disease before they transmit, that’s potentially a game-changer in terms of TB eradication,” he says.