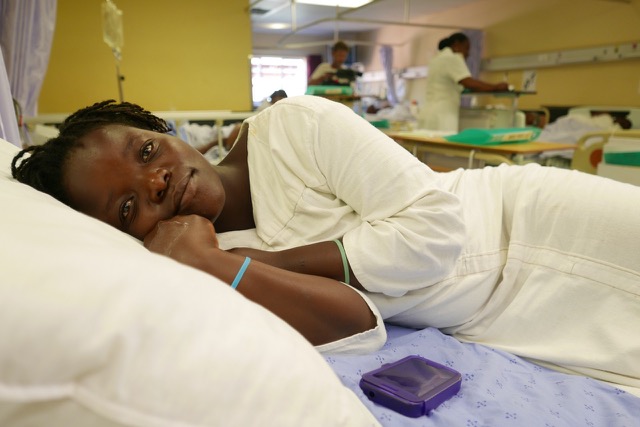 South Africa's high HIV infection rate makes it an ideal place to stage a vaccine trial. Many people becoming infected are young, like this woman hospitalized with AIDS earlier this year in KwaZulu-Natal. PHOTO: JASON KANE

A two-pronged HIV vaccine strategy that delivered lackluster results in a trial in Thailand 7 years ago will get another chance in South Africa. Last week, researchers injected the first of what they hope will be 5400 healthy men and women between 18 and 35; each will receive either a combination of two vaccines or placebo shots. The $130 million study should show once and for all whether the combination—the only HIV vaccine so far to show any hints of benefit in an efficacy study—actually works.

Some researchers say the results in Thailand were so unimpressive that the massive study, funded primarily by the National Institute of Allergy and Infectious Diseases (NIAID) and the Bill & Melinda Gates Foundation, amounts to a waste of research funds. “That money could be much better spent developing promising concepts that have a real chance of working,” says Ronald Desrosiers, an HIV vaccine researcher at the University of Miami in Florida. But Anthony Fauci, head of the NIAID in Bethesda, Maryland, says there was enough evidence of efficacy in the Thai trial to warrant another test. “We’re just going to have to let it play out,” Fauci says.

Trial leaders argue that even a modestly efficacious vaccine would help South Africa, which has more than 6 million HIV-infected people—19% of the world’s total. “There have been all these naysayers,” says Glenda Gray, who heads the South African Medical Research Council in Cape Town and will lead the new study. “Do they not care? It means they’re completely out of touch with the epidemic and that HIV continues to ravage Africa.”

The Thai trial, which involved more than 16,000 people, found that the vaccine reduced the risk of HIV infection by a modest 31.2%. Volunteers first received a canary-pox virus engineered to deliver several HIV genes. This was followed by a shot that only contained HIV’s surface protein, gp120, plus alum, an immune stimulant called an adjuvant. Both vaccines were designed to protect against strains of HIV in circulation in Thailand; the dual approach was meant to stimulate different immune responses.

For the new study, researchers built similar vaccines with strains common in South Africa but chose a stronger adjuvant called MF59. Participants will also receive an extra injection of the gp120 vaccine in an attempt to make the protection more durable.

Critics say the problem isn’t just the low level of protection seen in Thailand. The study also failed to show a mechanism that could explain the modest benefit, they argue. Researchers studying stored blood samples from the Thai study found that vaccinated people who did not become infected had higher levels of antibodies that bind to gp120. But in test tube experiments, the same binding antibodies do not prevent the virus from infecting cells, which some researchers insist is critical for protection. “Fundamentally, there’s no logical pathway from what we know to this vaccine trial,” says virologist Paul Bieniasz of the Aaron Diamond AIDS Research Center in New York City. “There should be more intelligent debate about what moves forward in the pipeline.”

Bieniasz and others think vaccine researchers should focus on other approaches, like the rare antibodies that have unusual power to neutralize HIV in the test tube and work against a huge range of mutant strains—crucial for a vaccine against the constantly mutating virus. Many groups are attempting to develop vaccines that can teach the body how to make these broadly neutralizing antibodies, but progress has been slow.

Genoveffa Franchini, a vaccine researcher at the U.S. National Cancer Institute in Bethesda, has another concern about the trial: the new adjuvant. In May, Franchini and co-workers reported in Nature Medicine that the vaccine duo works in rhesus macaques when gp120 is combined with alum, but not with MF59. “If MF59 is doing the same thing that it’s doing in the macaques, then you’re going to end up having no protection and you won’t know why,” Franchini said at a recent HIV/AIDS conference at Cold Spring Harbor Laboratory in New York. She suggested MF59 might even overstimulate the immune system and create more target cells for the virus to infect, leaving vaccinated people more vulnerable to infection. “There’s this oath that we take when we finish up medical school: Don’t harm,” she cautioned.

But MF59 did work in another monkey study, said Lawrence Corey of the Fred Hutchinson Cancer Research Center in Seattle, Washington, who heads the NIAID-funded network overseeing the study. “People of good faith will have different answers,” he said.

Gray, the study leader, thinks Franchini makes a “compelling” case to add an alum arm to the trial—if the researchers can find the money. But she says the South African study is well designed as is, with many checkpoints at which it can be halted if the vaccine is harmful or even if it becomes clear that vaccinated people are getting infected at the same rate as those in the placebo group. “Someone has to put their stake in the ground and have the courage to move forward, knowing we might fail,” Gray says.