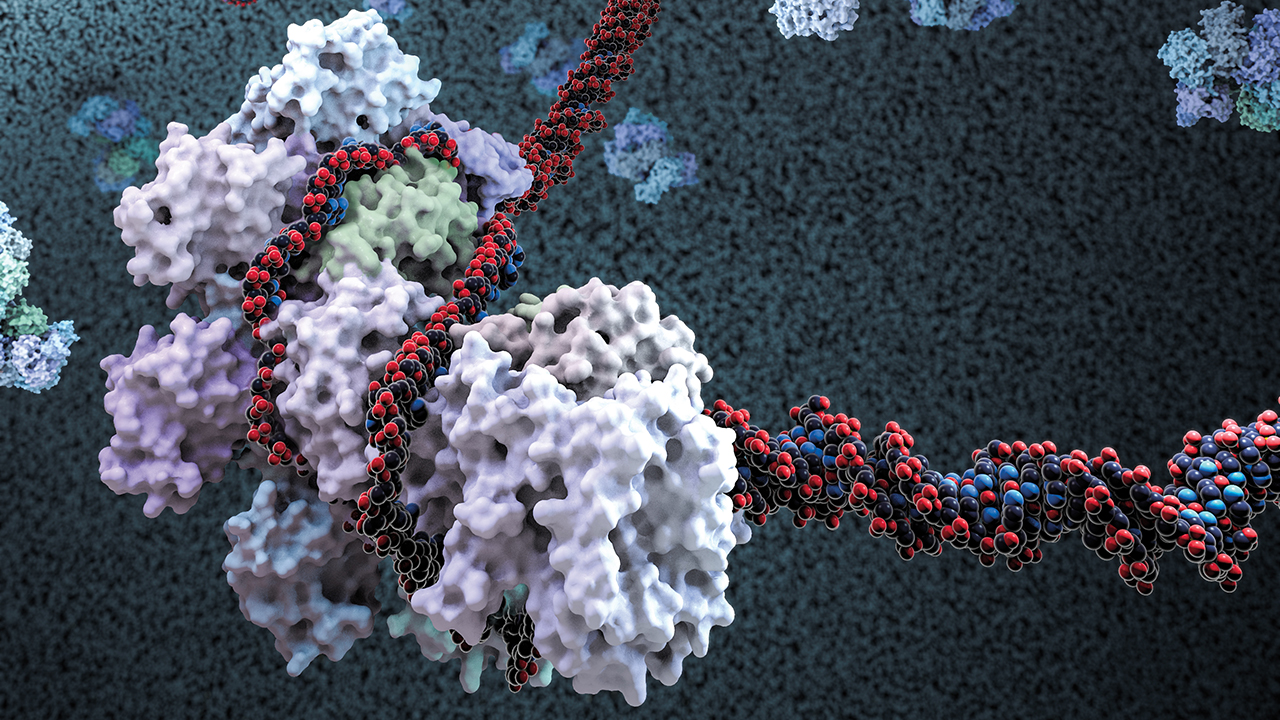 Stopping CRISPR’s genome-editing scissors from snipping out of control

In an episode of the resurrected X-Files TV show that ran earlier this year, aliens attack Earth with a bioweapon based on CRISPR, the genome-editing tool that vastly simplifies the ability to modify DNA. Agent Dana Scully, one of the show’s main characters, resists the attack because her genome earlier had incorporated some alien DNA that had anti-CRISPR defenses. Now, the art that imitated the science is being followed by the science imitating the art: Researchers have found for the first time anti-CRISPR proteins that shut off the genome editor and shown they can use them to control the cutting of DNA in human cells.

In Cell yesterday, molecular biochemist Erik Sontheimer of the University of Massachusetts Medical School in Worcester and colleagues describe three proteins in Neisseria meningitidis that inhibit its version of Cas9, an enzyme that some CRISPR systems employ to cut the DNA. (N. meningitidis is a bacterium that causes a form of meningitidis in humans.) “Any time you have greater control over a useful technology, the utility improves,” says Sontheimer, whose pioneering work (published in Science in 2008) first suggested that CRISPR—an immune system in bacteria and archaea—could be adapted to editing the DNA of other organisms.

Many research groups have begun using CRISPR’s Cas9 molecular scissors to create potential therapies for humans, mutate genes in lab animals, or even craft “gene drives” in mosquitoes that render them incapable of transmitting malaria. These interventions hold great promise for humans, but they also present what Sontheimer and his co-authors call “practical difficulties and safety concerns” because there are no “off switches” to prevent Cas9 from making cuts in the wrong places or to stop gene drives using the enzyme from running amok.

In 2013, biochemists Karen Maxwell and Alan Davidson at the University of Toronto in Canada, who study the viruses known as phages that infect bacteria and are co-authors on the new study, reported in Nature that they had found anti-CRISPR genes in a bacterial system that uses a different DNA-cutting enzyme than Cas9. Other groups have also shown that various artificial strategies—like small molecules or light—can shut down Cas9. But Rodolphe Barrangou, a functional genomics specialist who in 2007 published a landmark CRISPR paperin Science, notes that the proteins revealed in the new work offer “a nature-driven approach” to controlling Cas9. “This is very powerful,” says Barrangou, who is at North Carolina State University in Raleigh. “It’s awesome.”

In addition to offering a handy way to manipulate the CRISPR technology, the anti-Cas9 proteins have “profound” evolutionary implications, the authors of the Cell paper suggest. These proteins likely emerged first in phages as a way for those viruses to counter the Cas9-based immune defense of bacteria. But the essence of the CRISPR defense mechanism is that bacteria incorporate the phage genetic material into their own DNA and use it against the parasite if it reinfects. So N. meningitidis ended up with anti-CRISPR genes in its own genome, which may limit both the bacteria’s ability to stop subsequent invasions from a familiar phage and to build an effective CRISPR defense against novel phages.

Sontheimer himself cautions that “there are a lot of things to work out.” The CRISPR system that most research teams now use to modify human cells and those of other complex organisms was adapted from the bacterium Streptococcus pyogenes, not N. meningitidis, and the three newfound proteins can’t shut off its Cas9. But Sontheimer and others predict they will find ones that do. “This paper is a proof of principle,” he says. “There definitely are going to be other Cas9 inhibitors. Now, the search is on.”