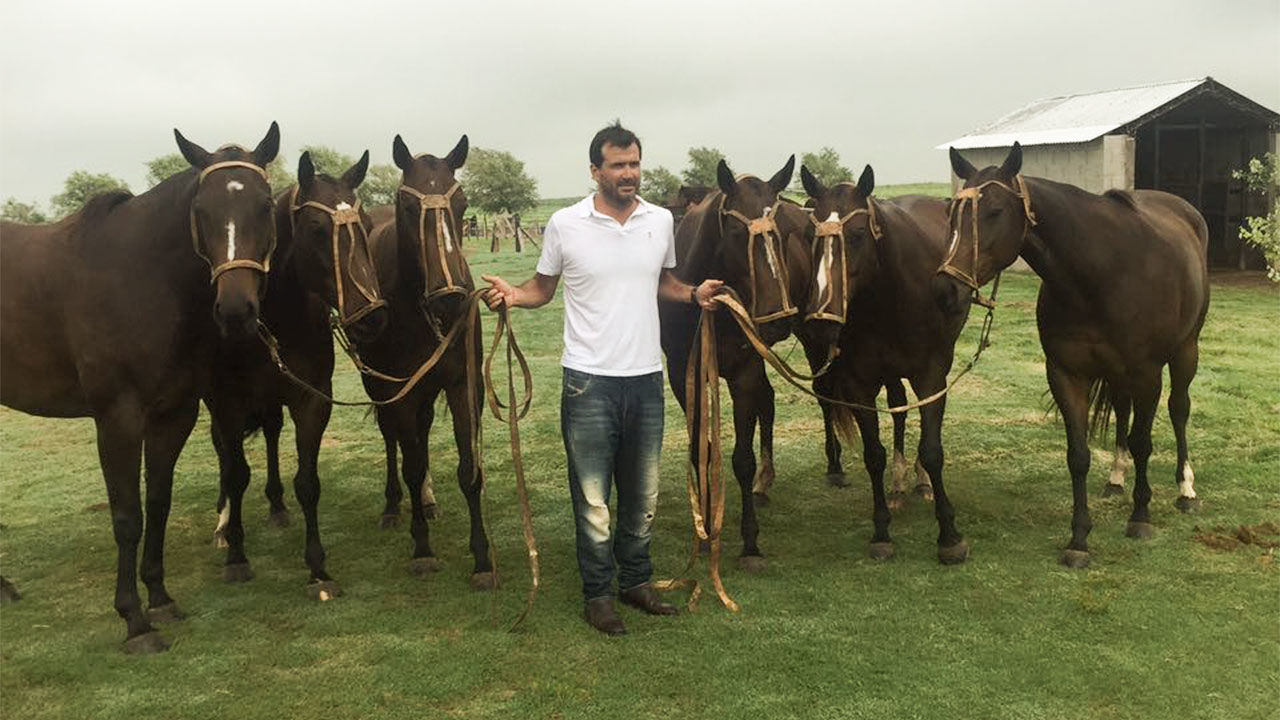 Polo star Adolfo Cambiaso with six clones of Cuartetera he rode at the Argentine Open this week. Courtesy of Alan Meeker

Last Saturday, at a prestigious match in the Buenos Aires neighborhood of Palermo, polo player Adolfo Cambiaso rode six different horses to help his team win. That in itself is not remarkable: Cambiaso is widely considered the world’s best polo player. What is noteworthy is that all six horses were clones of the same mare—they’re named Cuartetera 01 through 06—and that Cambiaso did it at such a high-profile event.

“It’s most important that he won at Palermo,” says Santiago Ballester, a member of the Argentine Association of Polo in Buenos Aires. “It’s the tournament.”

Riders frequently change mounts during a polo match, an intense game that’s dubbed “hockey on horseback” and has teams of four competing against each other for goals. Cambiaso leads the team La Dolfina, and was the first high-level player to embrace cloned horses. Polo, unlike horseracing, allows cloned animals, and they have become increasingly popular since 2013 when Cambiaso first helped his team win a match riding a clone.

Katrin Hinrichs, a veterinarian at Texas A&M University in College Station who specializes in reproduction and is known as a theriongenologist, cloned the horse Cambiaso first rode in a polo match. Hinrichs stresses that it’s difficult to separate the importance of a rider’s expertise from the contribution of a great horse. “If it’s Adolfo Cambiaso, he could probably ride plow horses,” jokes Hinrichs, who suggests some of the interest in cloned polo horses is “public relations.” Cambiaso is now part of a company based in Texas and Argentina, Crestview Genetics, that breeds cloned horses for polo matches.

Alan Meeker, who founded Crestview and is based in Fort Worth, Texas, says he respects Hinrichs but disagrees with her on this point. “She has it backwards,” says Meeker, a polo rider who was “extremely fortunate” in the oil and gas business, which led him to start cloning horses. “It’s 70% to 80% the horse, and everyone, including Cambiaso, will tell you this.”

Crestview has cloned more than 200 horses since 2009. “We’ve thrown a tidal wave of money at an idea we had that just so happened to work out,” says Meeker, whose interest in cloning began when he developed type 1 diabetes as an adult and wanted a new pancreas. “We’ve turned the breeding industry that does equine around by 180°.”

Meeker says his company faced abundant skepticism at the start. “Every scientist that deals with epigenetics told me this would never work,” says Meeker, referring to the fact that the environment modifies gene activity and helps explain why identical twins aren’t truly identical. Critics also have asserted that clones cannot perform as well as the original horse. Cambiaso’s use of increasing numbers of clones in the same match has silenced many. In October, he first rode six clones in a match, the Tortugas Open held at a country club by that name near Buenos Aires. (The donor horse was named Lapa, not Cuartetera.) “They thought I was crazy,” he saidafterward to La Nacion, a leading newspaper in Argentina. “And today it seems that I was not so crazy, right?”

Hinrichs says breeding a great stallion to a great mare is still the best way to make better horses. “Cloning is a sideways move,” she says. “It doesn’t improve the breed.” But polo players don’t necessarily want to breed better horses, she says. “You’re playing polo to win.”

Though cloning itself can’t improve a line, it does offer some advantages to the original donor horse, Hinrichs says. “If you start with a genetic mix that can really do this, then with cloning you know you have the ability to make sure a filly gets the best environment and care to go forward and you have the potential for the fillies to be better than the originals.” (Polo players prefer females to males as they have a better temperament and owners also can sell their foals.) She further notes that if you had foals from the same genetic background and trained them in the same ways, “you wouldn’t have to adjust your riding technique with each one.” Meeker says his team has “narrowed as much as humanly possible the [difference] between original and the clone,” even making sure the barn blankets and dogs are the same colors as the ones the original donor knew.

Meeker says Crestview Genetics now is coupling cloning with traditional breeding to indeed make a better line. Typically, breeders cannot pull more than four oocytes, or eggs, from a mare in a year, whereas stallions can provide sperm for a few hundred mares. With increasing numbers of female clones, Crestview has many more oocytes from the “same” animal to pair with stallions. “We want to show we can create a genetic improvement for breeding.”

Ultimately, Hinrichs says, the Palermo match shows how far the technology has progressed since the early days of animal cloning, which had a lot of failure and early death. “It’s great to know that there are six clones that were born and healthy enough to do that kind of athletic competition,” she says. “That really says something with the robustness of the cloning procedure.”

Meeker attended the Argentine Open and embraced Campasino after the win. “He said, ‘It took 7 years, but we did it, 7 years,’” Meeker remembers. “It was a very emotional match. It’s vindication and proof of concept.”