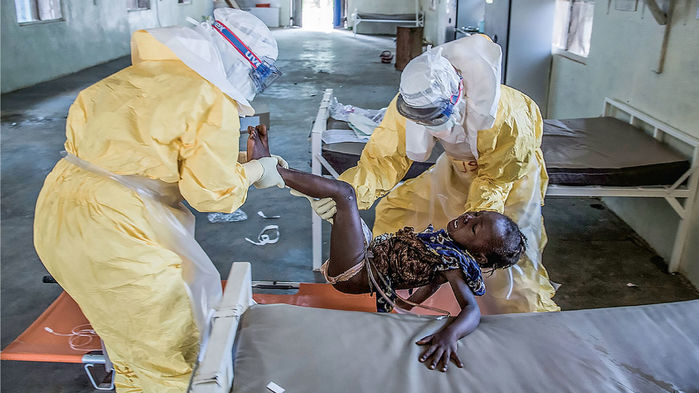 A patient arrives in an isolation ward during a 2014 outbreak of deadly Lassa fever in Sierra Leone. Credit: Lam Yik Fei/Contributor/Getty Image

A coalition that aims to develop new vaccines for emerging infectious diseases has nearly half a billion dollars in its coffers and its first three diseases in its sights.

Over the next 5 years, the Coalition for Epidemic Preparedness Innovations (CEPI) plans to bankroll the development of vaccines against three viral threats—Middle East respiratory syndrome (MERS)-coronavirus, Lassa, and Nipah—so that small outbreaks never get a chance to become raging epidemics. Formed last year without serious funding, CEPI has received $100 million commitments from the Wellcome Trust and the Bill & Melinda Gates Foundation, and the governments of Japan, Germany, and Norway have pledged to contribute an additional $260 million. As Science went to press, CEPI planned to announce the commitments at the World Economic Forum this week in Davos, Switzerland.

Epidemiologist John-Arne Røttingen, CEPI’s interim president through 2017, says he hopes more countries will now contribute. “CEPI is a collective function, and it’s a premium they need to pay for global health security,” says Røttingen, who is based in Oslo.

The devastating Ebola epidemic that erupted in West Africa in 2014 sparked the formation of CEPI. Experimental Ebola vaccines, which have no commercial market, were sitting in laboratory freezers when the epidemic broke out, but they had never been tested in humans. Clinical trials began in haste in September 2014, but vaccine development is a multiphase process that requires first conducting small-scale studies for safety and immune responses in hundreds of people who are not at risk for the disease. Vaccines that pass those tests move on to real-world efficacy trials in thousands of volunteers. By the time an Ebola vaccine proved its worth in July 2015, standard containment efforts had already nearly brought the epidemic to a standstill.

Jeremy Farrar, head of the Wellcome Trust in London, co-authored an influential perspective in the 23 July 2015 issue of The New England Journal of Medicine that spelled out the need for a coordinated global effort to help advance vaccines against menacing infectious diseases that industry ignored because of dodgy markets. The article proposed taking novel vaccines through preliminary human testing before the inevitable outbreaks—an idea that has now evolved into CEPI. “We now have enough money to show the world that this can deliver,” says Farrar, who is on the interim CEPI board.

CEPI will now solicit proposals from academic researchers and industry to develop candidate vaccines for its three target viruses. In 5 years, it aims to take two vaccines for each virus through early human studies so that they’re in the wings and ready for a real-world test as soon as one of these viruses surfaces again. CEPI also intends to fund vaccine “platforms”—technologies like messenger RNA or harmless viral vectors that can serve as backbones for a variety of vaccines.

CEPI chose its first targets after analyzing the public health impact of several diseases on a priority list assembled by the World Health Organization in 2016. All three are serious threats: Respiratory illness caused by MERS continues to haunt the Middle East, Lassa fever causes life-threatening hemorrhagic illness in West Africa, and Nipah virus in Asia leads to brain inflammation with a high mortality. Vaccines for all are lacking, but CEPI’s scientific advisers believe they do not present any obvious technical obstacles and are within reach.

The U.S. government, one of the world’s largest investors in vaccines against emerging infectious diseases, has yet to commit anything to CEPI, but Røttingen says he’ll try again now that the U.S. presidential election is over. In the meantime, he says, CEPI has “a very strong collaboration and compact” with U.S. agencies including the National Institutes of Health (NIH). “I cannot give them money, but I’m very interested in collaborating when they do trials of vaccines,” says Anthony Fauci, head of NIH’s National Institute of Allergy and Infectious Diseases in Bethesda, Maryland. “They’ll get in-kind contributions from us. And the half-billion they roll out at Davos will attract other donors.”

By the end of 2017, CEPI aims to raise a total of $1 billion, needed to fully fund its first 5 years. “There are as many as 50 pathogens that could emerge, and we’d like CEPI to be so successful that 10 or 20 years from now, we’ll have a vaccine for every one of them,” Farrar says. But for now, he says it’s crucial to prove that it can be done with the first three targets. “You’ll do more than just produce three vaccines,” Farrar says. “You’ll transform the way we think about vaccines and the pipeline.”