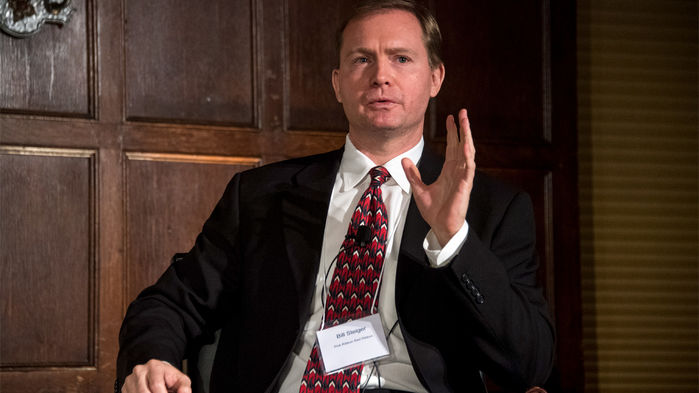 Bill Steiger in January spoke at an event that offered the Trump administration advice about how to prepare for the next pandemic. Georgetown University

Steiger is working at the U.S. Department of State on a so-called “beachhead team,” which helps agencies transition from the Obama to the Trump administration. Several sources tell ScienceInsider that Steiger attended the executive board meeting of the World Health Organization (WHO) in Geneva, Switzerland, in January. Steiger did not respond to an email request for an interview.

Steiger, who has a doctorate in Latin American history, directed the Office of Global Health Affairs in the Department of Health and Human Services (HHS) during both terms of the Bush administration. During his tenure, he served as the U.S. representative to both the WHO executive board and the board of directors of the Global Fund to Fight AIDS, Tuberculosis and Malaria. Both WHO and the Global Fund are now in the process of selecting new leaders.

In 2007, Bush nominated Steiger to be the U.S. ambassador to Mozambique, but the full Senate never voted on the nomination. At his Senate nomination hearing, Steiger was questioned about allegations that he suppressed a surgeon general’s report because it conflicted with Bush administration policies on public health, and also imposed travel restrictions on HHS scientists that forced them to withdraw accepted presentations at an international AIDS conference. Steiger separately took heat for criticizing a report issued by WHO and the Food and Agriculture Organization of the United Nations because it denounced advertisements for so-called junk food.

Steiger has a high-powered political pedigree. He’s the godson of former President George H.W. Bush, his father served as a representative, and his mother chaired the U.S. Federal Trade Commission. He currently is on leave from his job as chief program officer at Pink Ribbon Red Ribbon, a nonprofit in Washington, D.C., that battles women’s cancer and is affiliated with the George W. Bush Institute.

On 10 January, Steiger spoke at a conference held at Georgetown University in Washington, D.C., that focused on pandemic preparedness in the incoming Trump administration. Steiger noted that he wasn’t “officially” part of the transition team at that point, but had shared his No. 1 piece of advice. “There’s absolutely no way to keep HHS in particular on a purely domestic track through 4 years of a presidential term,” Steiger said. “Some international global health crisis will occur that will divert that attention.”

Steiger suggested that the global health security agenda “offers an easy win for the new administration” and that Trump “at a minimum preserve what has been working well so far.” The new WHO director-general, Steiger said, should also be willing to “call member states out” who aren’t transparent and cooperative during public health emergencies and should put “aside this deep hostility toward the private sector that we’ve seen out of Geneva for the past 10 years or so.”