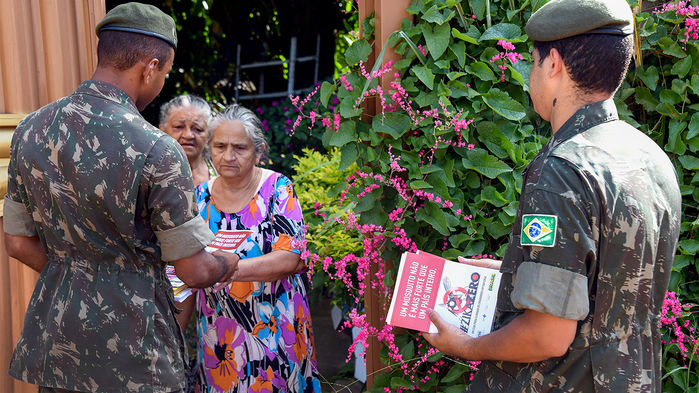 Brazilian soldiers last year led a battle against Zika in a door-to-door campaign about how to control mosquitoes that carry the disease. EVARISTO SA/AFP/GETTY IMAGES

Dengue may bring out the worst in Zika

Close relatives have complicated relationships with each other even in the viral world. A new mouse study shows that if the animals have antibodies from dengue or West Nile virus, it sets them up for more severe disease from their close cousin, Zika virus.

If such “antibody-dependent enhancement” (ADE) also takes place in people, it could have helped fuel Zika’s recent explosion in Brazil, where more than 90% of people in some communities have been infected with dengue. ADE could also complicate the development of vaccines for West Nile, dengue, and Zika. And with the onset of spring reigniting local transmission of Zika last week in the continental United States—where West Nile is widespread—ADE could give epidemiologists a new window into transmission and disease patterns.

Findings in mice, of course, often only apply to mice, as the researchers, from the Icahn School of Medicine at Mount Sinai in New York City, acknowledge. But they note in their paper, published online this week in Science, that ADE is already known to worsen some dengue infections in people. Four distinct human serotypes of dengue sicken humans, and an initial infection with one typically causes only mild disease. Yet serious trouble can occur when a person is subsequently infected with a different serotype. In that case, antibodies from the first infection can attach to the virus in one place and to cells in another. Instead of blocking infection, the matching antibodies actually promote it—leading to higher viral levels and a life-threatening hemorrhagic disease.

Zika’s surface protein—the primary target of antibodies—looks extremely similar to those on dengue and West Nile virus, members of the same flavivirus family. Test tube studies with dengue have already suggested the resemblance can cause problems. Last year, a team led by Gavin Screaton of Imperial College London found that Zika virus is far more likely to infect human cells if researchers first spike them with dengue antibodies. A month later, Davide Corti of Humabs BioMed in Bellinzona, Switzerland, and co-workers confirmed the in vitro finding. But they did not see the effect when they gave monoclonal dengue antibodies to live mice and then infected them with Zika.

The Mount Sinai investigators took a second look for ADE in mice. Mice normally resist the Zika virus, so the team used animals engineered with a crippled version of an immune gene that naturally would protect them from Zika. When infected with the virus, these mice become seriously ill, with symptoms ranging from weight loss and listlessness to fever, paralysis, and death. The team found that when they first gave the mice plasma from humans who had developed antibodies against either dengue or West Nile during natural infections, the illness was much worse. Mice primed with dengue antibodies had levels of Zika virus 10 times higher than those in control animals, and a higher risk of death. Antibodies to West Nile, which is more distantly related to Zika, had similar but weaker effects.

The findings are “convincing,” Corti says. “This fits nicely with the concept raised by Screaton that Zika virus in this context could be considered as a fifth serotype of dengue.”

The mice that received dengue or West Nile antibodies also had higher levels of Zika virus in their testes and spinal cords than control animals did. “It looks like because of ADE, the virus is able to breach into areas that normally are relatively protected,” says virologist Jean Lim, one of the authors of the study. That could increase human cases of sexual transmission of Zika, she and her colleagues suggest. The presence of increased virus in mouse spinal cords might also help explain two central nervous system maladies linked to Zika: microcephaly in babies and Guillain-Barré in adults.

Stephen Thomas, an infectious disease specialist at the State University of New York Upstate Medical University in Syracuse, doubts that this mouse study reflects what happens in humans. He conducted one of three monkey studies last year—two are on the internet but none has been published—that failed to find ADE in animals infected first with dengue or yellow fever (another flavivirus) and then Zika. The monkey model has its own limitations: Monkeys don’t develop severe disease when infected with different serotypes of dengue virus, which clearly happens in humans. But Thomas also questions the epidemiological arguments for ADE in people. “Zika has been transmitting in places for a long time where there’s been dengue, and we have not seen what we’ve seen in South America,” he says.

Still, even the possibility that ADE might worsen Zika in humans implies to Lim and co-authors that scientists should “exert great caution” in developing flavivirus vaccines because they might set people up for enhanced disease if they later become infected by a closely related flavivirus. And it adds to the urgency of further studies of Zika, says Lim, “to see whether this actually happens in humans.”