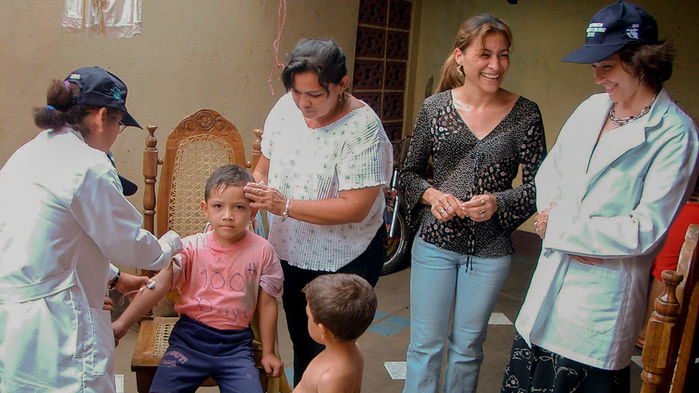 Eva Harris (far right) has led a dengue study in Nicaragua that for more than 12 years has regularly taken blood samples from children. Alejandro Belli/PLOS Pathogens

It’s a disease theory fit for a spy novel: Protective antibodies can turn double agent, teaming up with the dengue virus to make an infection more severe, even life-threatening. First proposed more than 40 years ago, antibody-dependent enhancement (ADE) has won over many doubters but still has impassioned skeptics. Now, a finding from a large, long-term study in Nicaraguan children adds compelling evidence that ADE is real, occurring when people previously infected with dengue—and with the right level and type of dengue antibodies still in their blood—become infected again.

“It wasn’t my life mission to prove or disapprove ADE,” says molecular biologist Eva Harris of the University of California, Berkeley, who started the study to better understand dengue epidemiology and pathology. “We kind of stumbled into it. And I never was really convinced until these data.”

Dengue, spread by mosquitoes, sickens up to 100 million people each year, mostly in tropical regions of the world. The virus has four “serotypes,” each of which triggers a unique antibody response. Someone infected for the first time with any of the serotypes typically has a mild, flulike disease that causes fever and muscle pains but does not require hospitalization. But those who become infected with a second serotype later are at risk of dengue hemorrhagic fever/dengue shock syndrome (DHF/DSS), which can cause massive fluid loss, organ failure, and death.

What is unclear is how, exactly, the first infection makes the second one more severe. “That’s where the field has been stuck for decades,” Harris says. ADE advocates say the pre-existing antibodies are to blame, but others contend that T cells, innate immunity, and genetics also play important roles.

The ADE hypothesis, backed by test tube and animal data, builds on the fact that an antibody to the first dengue serotype can bind to the virus, but not strongly enough to “neutralize” it. This binding antibody/virus complex more easily enters host cells, allowing the virus to copy itself at even higher levels. The intensified infection leads the immune system to storm the body with chemical messengers called cytokines, ultimately increasing the likelihood of blood vessels leaking, causing hemorrhage and shock.

ADE doesn’t always occur when people are infected with an additional dengue serotype, say the theory’s supporters, because the mechanism is complex. Exposure to dengue virus triggers a mix of binding and neutralizing antibodies—and ADE requires the mix to be just right. If a person’s pre-existing dengue antibodies are low, there aren’t enough binding antibodies to help the virus enter host cells. And if a person’s antibody levels are high, they’ll have enough neutralizing ones that can “cross-react” to the second infection and slow it down. The same thing happens if a person has been infected with two or more serotypes. But people enter the ADE “danger zone” when their levels are somewhere in the middle, Harris says.

To do the study, Harris and her team enrolled more than 8000 children between the ages of 2 and 14 in Managua and analyzed dengue antibodies found in their blood samples repeatedly taken over a 12-year period. Participants were asked to come to the study clinic if they had a fever; those kids were bled again and referred to a hospital if necessary.

More than 600 children came down with symptomatic dengue, and 44 of them developed DHF/DSS. An analysis of 41,302 blood samples taken from the entire study at different time points found that a child who had an intermediate antibody level and became infected again had a 7.64 times higher risk of being in the small group that developed DHS/DSS, researchers report today in Science.

“[The study is] truly impressive and a good example of how investments in long-term studies pay off,” says Aravinda de Silva, a virologist who studies dengue at the University of North Carolina School of Medicine in Chapel Hill. “I think this paper will put to rest whether antibodies can enhance dengue.”

It hasn’t, however. Timothy Endy, a dengue researcher at the State University of New York Upstate Medical University in Syracuse, notes that the assay Harris’s group used did not distinguish between binding and neutralizing antibodies—or even the different serotypes. “This study falls short,” says Endy, who says it’s “simplistic” and “overstated” to link ADE to specific levels of pre-existing dengue antibodies. “ADE is still a theory that invites rigorous science and investigation.”

Harris agrees that more work needs to be done to characterize the specific antibodies behind the phenomenon. “This paper is about a seroepidemiological finding,” she says. “It has the potential to be taken to next step that has a finer resolution of exactly what kind of antibodies are being measured, and that’s where we want to take it.”

Even the father of the dengue-ADE hypothesis, Scott Halstead of the Uniformed Services University of the Health Sciences in Bethesda, Maryland, says the new work doesn’t offer definitive proof of ADE. “If you’re going to say enhanced infection is occurring, you need direct evidence that infection was enhanced,” Halstead says. One way of doing that, he suggests, is by showing increased levels of virus in children infected for the second time. Still, Halstead says he’s “delighted” to see the new data that support ADE. Alternative theories are “fantasies” that have wasted research money, he says.

Whether the new finding has a practical application remains unclear. Halstead, Harris, and many other researchers have raised concerns that a dengue vaccine produced by Sanofi Pasteur may, in fact, be triggering ADE in some recipients. Clinical trials showed increased hospitalization from dengue in young children who received the shot, which is now licensed in at least 11 affected countries. The World Health Organization recommends that it only be used in kids over the age of 9, and only in areas where dengue incidence is high.

Halstead insists the increased hospitalization rate is due to ADE—which Sanofi Pasteur disputes—and says the vaccine should not be given to people who test negative for dengue antibodies. Harris agrees. And knowing that intermediate antibody levels increase the risk of DHF/DSS could prove useful in the testing of future vaccines by showing who might be in what she calls the danger zone.

That, not surprisingly, is debated, too.

*Correction 17 November, 5:30 p.m.: This story has been corrected to reflect Scott Halstead’s comments on who should receive the vaccine.