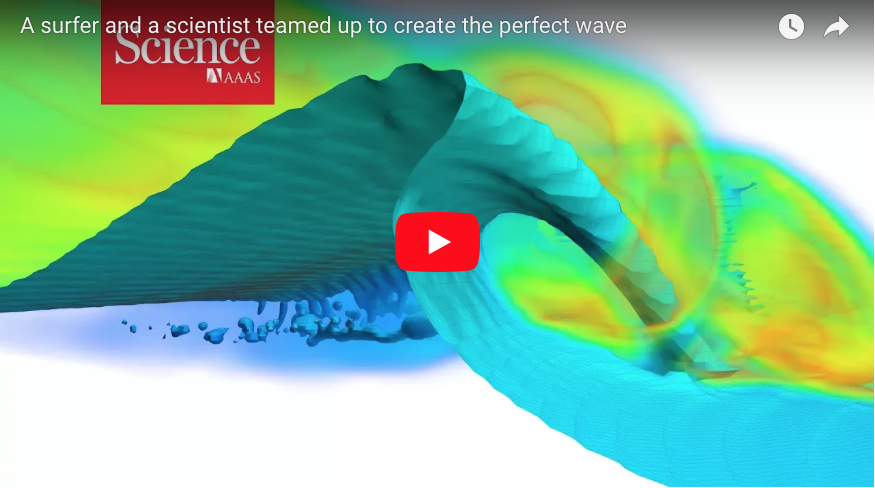 That’s a repeated gag line in The Endless Summer, the classic 1966 documentary that follows two globetrotting surfers on a quest to find the perfect wave. Good surfing waves are a rarity, and even when all the forces come together, the magic is fleeting. Few beaches have a bottom contour that can transform a swell into waves that surfers want to ride, and even then, the vagaries of the swell—its size, angle, periodicity—mixed with ever-changing winds and tides mean great surf sessions are few and far between.

In central California farm country, 175 kilometers from the nearest beach, a champion surfer and a fluid mechanics specialist have teamed up to change that. In a 700-meter-long artificial lake, they’ve devised a system that drags a carefully shaped metal blade called a hydrofoil through the water. As the resulting swell sweeps over the lakebed, which scientists precisely contoured with the help of supercomputers, it is transformed into a surfing wave of unearthly perfection—again and again and again.

Professional surfers, used to the fickle ocean, are astonished by the waves conjured up by Adam Fincham, a researcher at the University of Southern California (USC) in Los Angeles, and Kelly Slater, who has won the world title in surfing an unprecedented 11 times.

Last September, 18 pro surfers came to what’s called the Surf Ranch to compete in the Future Classic. The contest was meant to assess whether the pool—which is not open to the public—can serve as a competition venue for the World Surf League’s (WSL’s) Championship Tour that’s staged at top-notch breaks around the world. The mock contest, sponsored by the World Surf League (WSL) that governs professional surfing—and is co-owned by billionaire Dirk Ziff—included judges, announcers, and jumbo screen monitors that featured each wave and slow-motion replays. “The experience they’ve created for surfers with this wave is second to none,” said competitor Adrian Buchan, who is currently ranked 15th on this year’s WSL Championship Tour.

Researchers in Fincham’s field are as impressed as the surfers are. Olivier Eiff, a mechanical engineer who specializes in environmental fluid mechanics at the Karlsruhe Institute of Technology in Germany, says scientists who study waves typically focus on their effects on erosion, the exchange of gases between ocean and air, and waterfront structures. But he can’t name a single colleague who sculpts waves, a daunting challenge in fluid dynamics. “It’s an incredible job,” Eiff says. “I don’t know anybody else who has the guts to attack the complexity of such a big problem.”

If similar wave pools are built around the globe, as Surf Ranch backers hope, they could fundamentally alter the surf world. On the surfing blogosphere, loud worries have already surfaced that “Kelly’s wave” strips out surfing’s natural allure and could breed obnoxious hordes of newbies who will further crowd ocean breaks. But the awestruck far outnumber the naysayers. “I see the day when the world’s best surfer is from Little Rock, Arkansas,” says 1968 world champion Fred Hemmings of Kailua, Hawaii. “This is the start of a huge revolution.”

If you don’t have someone who’s passionate about things, they’re not going to do it differently than someone who’s done it before.

Wave pools for surfing date back more than 50 years, but even the best pale in comparison to a good ocean surf spot. In the ocean, storms create surface gravity waves that roll along in deep water and only interact with the bottom, or shoal, when the water depth is about half the length of the distance between successive crests (the wavelength). Three things then happen: The wavelength shortens, the height increases, and the crest moves faster than the wave’s lowest point, the trough. When the height of the wave is about the same as the water’s depth, the wave breaks and surfers surf.

If the bottom has just the right contour and the wind blows from land to sea or is still, a swell is transformed into a breaking wave that peels evenly to the left or the right, with the white water moving across the wave’s face like a steadily closing curtain. Steeper waves can pitch into a tube, allowing more skilled surfers to ride for a few seconds inside the barrel. A 30-second ride on an ocean wave is remarkably long, and few spots consistently offer barrels.

In 2006, Slater, the world’s most famous surfer, approached Fincham, who took on the challenge of mimicking nature in a tank. “I had no idea who he was,” says Fincham, who grew up in Jamaica and began surfing only when he came to USC. To develop the wave, Slater founded his own eponymously named company, which promptly hired Fincham.

Fincham is, by several accounts, wildly creative and dogged. He’s published works on such esoteric-sounding topics as digital particle imaging velocimetry for laser diagnostics to decaying grid turbulence in a rotating stratified fluid. But Slater jokes that he and Fincham both have a touch of obsessive-compulsive disorder. “If you don’t have someone who’s passionate about things, they’re not going to do it differently than someone who’s done it before,” Slater says.

Tanks in labs typically make waves a few centimeters tall, which can be modeled with linear equations: What you put in reliably predicts what’s produced.

But trying to mimic a larger swell by generating steep waves unleashes nonlinear forces, including turbulence; a thin, slow-moving layer atop the swell (“the boundary layer”); and oscillations of the entire water body called seiching. “Nonlinearity is everywhere,” Eiff says—which makes it fiendishly difficult to plot out an artificial wave.

The scientific literature on wave sculpting doesn’t run deep. Fincham and Slater’s U.S. patent applications reference just two scientific papers about waves, both written by prominent physicists/mathematicians in the 1870s. So aside from other patent filings on surfing waves, Fincham and Slater were largely on their own.

They began in a laboratory wave tank. Whereas many wave pools use paddles, plungers, caissons, or other strategies to effectively throw water into the air, Fincham’s team designed a hydrofoil that is partially submerged in water. As it cuts through the pool, the hydrofoil moves water to the side (but not upward) and then pulls back on the forming wave to “recover” some of the water it pushed away. The result is what physicists call a solitary wave, or soliton, that mimics an individual swell in the open ocean.

Then Slater’s surfing experience came in. “It was [Fincham’s] job to figure out how to make that swell, and it was my job to figure out how to break that swell,” he says. It takes a shallow “reef” of just the right shape to turn a swell into a surfing wave. To fine-tune the shape of the pool bottom, the team relied on Slater’s input and on massively parallel supercomputers that often had to run for weeks at a time to complete a simulation. In silico, a wave is a mesh of millions of cells that represent air and water.

Computations for each of the cells and how they interact with each other simulate the evolving wave as it develops a face and a barrel. The computations are “mathematically horrendous,” says Geoffrey Spedding, a USC fluid mechanics specialist who has collaborated with Fincham but had little input on this project.

Fincham’s team transferred the lab findings to the Surf Ranch, a rectangular pool that was originally an artificial water skiing lake. The hydrofoil—imagine a vertically oriented, curved, stubby airplane wing—sits in water a few meters deep. It’s attached to a contraption that’s the size of a few train cars and, with the help of more than 150 truck tires and cables, runs down a track for the length of the pool at up to 30 kilometers per hour. This creates a soliton that stands more than 2 meters tall. The pool’s bottom, which has the springy feel of a yoga mat, has different slopes in different parts, and the contours determine when and how the soliton breaks. The patents also describe “actuators” in the hydrofoil that make it possible to adjust the size and shape of the wave to suit different skill levels.

The hydrofoil moves up the pool to create a wave that breaks from right to left. Giant gutters serve as dampers to reduce the seiching and limit bounce back from the walls that border the pool, but it takes 3 minutes for the waters to calm. Then the hydrofoil travels back down the pool and forms a wave that breaks in the opposite direction. The ride can last for a ridiculously long 50 seconds, and the wave alternates between big faces to carve on and barreling sections. Onlookers hooted wildly during that September contest when Stephanie Gilmore, who has won the women’s title six times, stayed in the barrel for an astonishing 14 seconds.

Aside from providing a novel contest format—organizers of the Olympics have taken note—the wave could serve as a training platform for high-level surfers and a controlled setting for beginners to learn. The commercial potential led WSL Holdings, the parent company behind the Championship Tour, to buy a controlling interest in Slater’s wave company. But some see a multimillion-dollar novelty project that’s commercially doomed. “The wave is fantastic, epic, everyone would love to surf it for sure,” says Tom Lochtefeld, a San Diego, California, inventor whose company Wave Loch produces the FlowRider, a “sheet” of water ridden on what looks like a snowboard. “But it’s an evolutionary dinosaur.”

Lochtefeld, whose FlowRider is in 200 venues, contends the hydrofoil scheme has too many mechanical elements. “It’s fraught with breakdowns,” he says. “And when you have that class of energy transfer and that much water in motion, the pool gets so screwed up.” Nor would it be a moneymaker, he says. By Lochtefeld’s calculation, you need to create a wave at least every 10 seconds—or at least a million waves per year—to make a profit on an artificial surfing wave. Wavegarden, a Spain-based company that makes ocean-like waves ridden on regular boards and is open to the public at two locations, boasts that it can produce waves every 4 seconds.

But WSL Holdings—which won’t reveal how much it has invested or what it costs to run the Surf Ranch—does not plan to sell rides on waves per se. In addition to holding pro contests, the company hopes to build surf parks with hotels, concert venues, and retailers.

Slater envisions that wealthy surfers might want to buy into luxury, private resorts built around a wave, similar to the Discovery Land Company’s high-end golf communities around the world. And Fincham and crew have wave improvements in the works, including testing different reefs, increasing the swell size, and even adding giant fans to control the wind.

One day, Fincham predicts, it may be possible to make a surfing wave that allows now unthinkable maneuvers, like a loop-de-loop in the barrel. “We’ve got the perfect natural wave, and, well, that’s cool,” he says. “But what about a supernatural wave that almost defies nature?”

Then again, there’s something supernatural about the wave they’ve already created. Ask the select few who have visited the Surf Ranch and seen the wave break. They aren’t wistfully telling their friends about what they saw yesterday. They’re talking about having seen tomorrow.