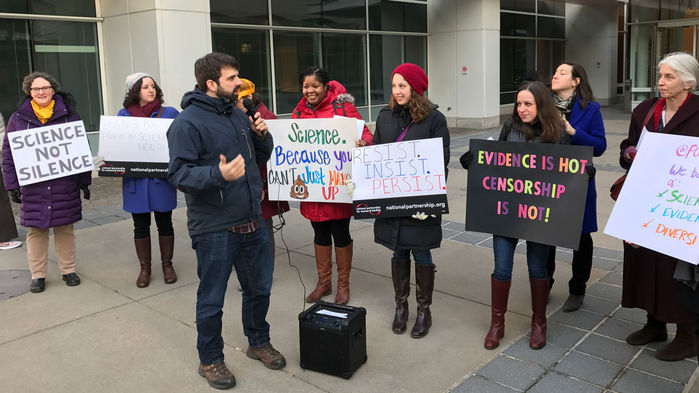 Protesters from several health advocacy groups gathered this morning in front of the Washington, D.C., offices of the Centers for Disease Control and Prevention. Alex Morash/The National LGBTQ Task Force

CDC word ban? The fight over seven health-related words in the president’s next budget

Presidential budget requests are political documents, and the wrong word can send a confusing message—and trigger controversy. President Donald Trump’s administration appears to have kicked up its own tumult by instructing the U.S. Centers for Disease Control and Prevention (CDC) to avoid certain words in its 2019 budget request.

On Friday, The Washington Post reported that CDC officials last week flagged seven words and phrases—diversity, entitlement, evidence-based, fetus, science-based, transgender, and vulnerable—that should not be used in connection with the budget document, due out in early February 2018. An analysis by ScienceInsider of the past four CDC budget requests finds that such a policy may have already gone into effect: Those words, in toto, appeared two-thirds less frequently in Trump’s 2018 budget request to Congress than in former President Barack Obama’s final budget submission for 2017.

As the Post noted, CDC’s parent agency, the Department of Health and Human Services (HHS), issued a statement that strongly challenged the media reports. “The assertion that HHS has ‘banned words’ is a complete mischaracterization of discussions regarding the budget formulation process,” the statement said. “HHS will continue to use the best scientific evidence available to improve the health of all Americans. HHS also strongly encourages the use of outcome and evidence data in program evaluations and budget decisions.”

CDC Director Brenda Fitzgerald addressed the controversy on Twitter. “I want to assure you there are no banned words at CDC,” Fitzgerald tweeted yesterday.

The Food and Drug Administration (FDA), another HHS branch, stated that there were no word bans there. “We haven’t received, nor implemented, any directives with respect to the language used at FDA to describe our policy or budget issues,” said a spokesperson. The media office for the director at the National Institutes of Health, another HHS unit, told Science that “we are deferring requests to HHS.”

Science tallied the usage of these words in CDC’s budget requests to Congress—formally known as Justification of Estimates for Appropriation Committees—for the past 4 years, including the last three submitted by Obama. The phrase “evidence-based” was the most common by far, appearing 125 times in the fiscal year 2017 request. In contrast, Trump’s 2018 budget request for CDC used it only 38 times, although the document was half the length of the last one Obama wrote. Diversity took a dive in 2018, to two mentions, compared with 10 in Obama’s last budget; the only remaining references were to CDC’s Office of Women’s Health and the Diversity Management Program and geographic diversity. “Vulnerable” was invoked nine times by Trump compared with 24 times by Obama.

In contrast, the words “fetus” (in reference to Zika virus and microcephaly) and “entitlement” (“fighting waste, fraud, and abuse in Federal entitlement programs”) each appeared once in Trump’s 2018 budget. None of Obama’s three most recent budget requests mentions either word.