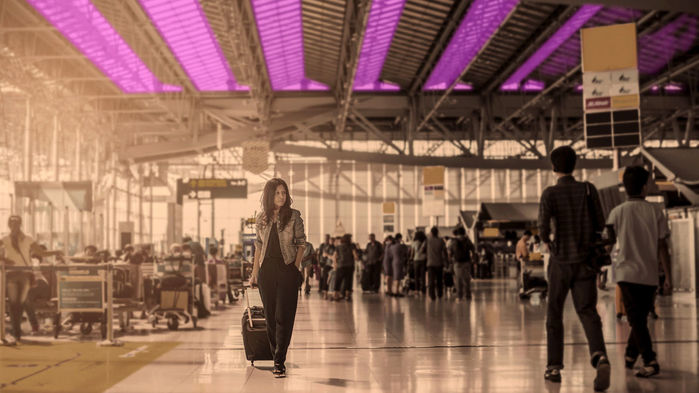 Could ultraviolet lamps slow the spread of flu?

UV lights disinfect by disrupting the molecular bonds that hold together microbial genetic material or proteins. The most commonly used lights have a wavelength of 254 nanometers (nm), which has a relatively short UV wavelength—the so-called “C” category—but can penetrate the skin and eyes, leading to cancers and cataracts. So for the past 4 years, a group led by physicist David Brenner at Columbia University Medical Center in New York City has tested shorter wavelengths, known as “far UVC light” that can’t penetrate the outer layers of the eyes or skin. The researchers found that far UVC eliminated bacteria on surfaces and did not harm lab mice.

Brenner and his co-workers next addressed whether far UVC could address a major health concern in many public settings: airborne microbes. The team first aerosolized influenza viruses inside a chamber and exposed them to UVC light with a wavelength of 222 nm or, as a control, to nothing. The researchers then collected liquid samples from the chamber and spread them on dog kidney cells susceptible to the flu. Unexposed samples could infect the cells, but the UVC-treated ones couldn’t, the researchers reported in a preprint study published online 28 December 2017 on bioRxiv. If the studies pan out, “that could really be beneficial in disrupting disease transmission,” says Shawn Gibbs, an industrial hygienist who has studied the disinfectant properties of UVC at the Indiana University School of Public Health in Bloomington.

Brenner became interested in UVC’s germicidal properties 5 years ago, after a friend went to the hospital for a minor surgery and became infected with drug-resistant bacteria that took his life. “I declared my own personal war on superbugs,” Brenner said in a TED talk he gave in April 2017.

Brenner works at a radiological research facility founded by Marie Curie, where he has long specialized in ionizing radiation, x-rays, and gamma rays—paying little attention to UVC’s germicidal properties. But after his friend’s death, he started to wonder. “People had certainly shown that far UVC light kills bacteria, but they hadn’t put it together that it wasn’t able to penetrate human cells,” he says.

Brenner’s team took advantage of recent improvements in excimer lamps, best known for their use in LASIK eye surgery. The lamps mix krypton and chlorine gases to produce single-wavelength photons—as opposed to a broad spectrum—that can range from 207 nm to 222 nm. The researchers added filters to the lamps to remove all but the desired wavelength. “Our idea wouldn’t have been much use if there hadn’t been a technology to produce mono light of that wavelength,” Brenner says. The cost per lamp is less than $1000, which could drop significantly if the technology proves itself and a company mass produces them, he says. He would not discuss his own commercial plans.

James McDevitt, an industrial hygienist at the Harvard T. H. Chan School of Public Health who has studied UVC’s germicidal properties, says he is “surprised” at the killing efficiency Brenner and colleagues reported, given predictions made by “commonly presented” calculations. Their methods seem sound at first glance, he adds, but notes that the new paper has yet to go through peer review. McDevitt also cautions that even if 222 nm does prove relatively safe, there are still exposure limits. Furthermore, it may not work against as broad a spectrum of bacteria and viruses as 254 nm. Finally, lamps hung in the upper parts of rooms may work on aerosolized bacteria and viruses but have little impact on microbe-contaminated surfaces.

Brenner and co-workers plan to conduct more studies with far UVC light and microbes, both to better assess its safety and effectiveness at different doses. If all continues to go well, he says they may have enough data to seek regulatory approval within the next few years.