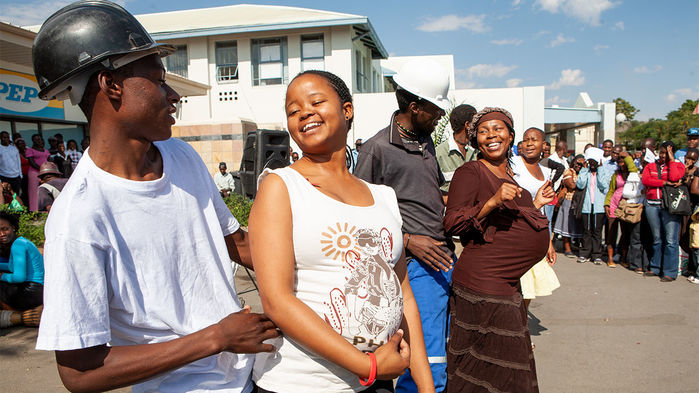 Dolutegravir, which enjoys a reputation as the best of 32 marketed antiretroviral drugs, took a serious hit in May when a preliminary analysis from a study that included more than 10,000 HIV-infected pregnant women in Botswana revealed it may lead to serious birth defects. Today, at the International AIDS Conference in Amsterdam, researchers reported more data from that study that suggest the risk of harm may be lower than first thought. But troubling questions remain about its safety during pregnancy and whether programs that plan to promote it widely should restrict its use in women of child-bearing age.

The potential problem with dolutegravir surfaced because of worries about another anti-HIV drug, efavirenz, which caused what are known as neural tube defects in newborn monkeys. In 2014, researchers in Botswana began a 4-year surveillance study, called Tsepamo, of all babies born to both HIV-infected and uninfected mothers at eight clinics to assess the frequency of neural defects. This rare condition can cause large holes in the spine or can prevent the top of the skull from forming. Two years later, before those results were in, Botswana made dolutegravir a preferred treatment because it powerfully suppresses HIV, people tolerate it well, and drug resistance rarely surfaces.

In April, the World Health Organization (WHO) in Geneva, Switzerland, contacted the Tsepamo team to help with new guidelines being prepared for pregnant, HIV-infected women. Scant data existed about dolutegravir, and Botswana was an ideal place to look for clues: The study was already underway, capturing about 45% of the births in the country, and the prevalence of HIV prevalence there is high. When the researchers took an early peek at their data, they found an association between neural tube defects and dolutegravir—not efavirenz. “We were extremely surprised,” says infectious disease specialist Rebecca Zash, a co–principal investigator of the study who is based at Beth Israel Deaconess Medical Center in Boston. “We thought we did something wrong.”

On 18 May, WHO issued an “alert” warning about the potential danger. Many countries had planned this year to start using dolutegravir—which is available in a cheap generic combination with other drugs—but these findings hit the pause button on what was going to be a global promotion of the drug.

In an unusual sequence of events, The New England Journal of Medicine (NEJM) today published the May data in an online report, a few hours before Zash presented an update that goes through last week. As the NEJM paper explains, their initial analysis was of 89,064 births. About 75% of the babies studied were born to mothers uninfected with HIV. There were 86 neural tube defects in all, a rate of 0.1% of the births. In HIV-infected mothers, 14 occurred in women who were taking antiretrovirals other than dolutegravir, a rate of 0.12%. But in 426 women who took dolutegravir before conception, the researchers found four cases of neural defects—a rate of 0.94%, about nine times higher than the other groups. No cases were found in pregnant women who started the drug during pregnancy. Neural tube formation occurs during the first 28 days of pregnancy.

At a packed conference session today, Zash reported new data from 170 more babies born to mothers who took dolutegravir from preconception forward. They found no more cases of neural tube defects, dropping the rate to 0.67%, which is still is six times higher than with other antiretrovirals. She stressed that the new findings don’t clear the air. “This is still a preliminary signal and we need more data to confirm or refute it,” Zash says. “It would also be nice to have data from other parts of the world.”

Maggie Little, a bioethicist from the Kennedy Institute of Ethics at Georgetown University in Washington, D.C., who specializes in the bioethics of research and women’s reproductive lives, complimented health officials around the world for quickly reacting to what she called “this deeply disturbing finding.” Too few studies intentionally assess the impact of antiretrovirals on pregnant women, who, for safety reasons, are routinely excluded from the clinical trials, Little says. “This study was almost an accident,” she adds, noting that it was designed to assess harm from efavirenz, not dolutegravir. “Why are we leaving this to chance?”

Pediatrician Lynne Mofenson, who works with the Elizabeth Glaser Pediatric AIDS Foundation in Washington, D.C., chaired the session and gave an overview of neural tube defects and antiretrovirals. “We have no antiretroviral regimens that are completely safe,” she stressed. “It’s a matter of benefit versus risk.” And for dolutegravir, that equation is tricky because the drug works exceptionally well at suppressing the virus for long periods, clearly benefitting the mother. “Many times I feel like we’re in a maternal-baby boxing match and we’re pitting one against the other,” Mofenson says.

In the wake of their startling initial findings, Zash and co-workers expanded Tsepamo to 18 clinics, which should capture nearly 75% of all births in the country. By March 2019, they calculate they will have data on 1200 babies born to mothers who started the drug preconception. If there are no more neural tube defects in this group by that point, then the risk presented by dolutegravir will be no different than other antiretrovirals, she says. “We’ll feel very reassured.”