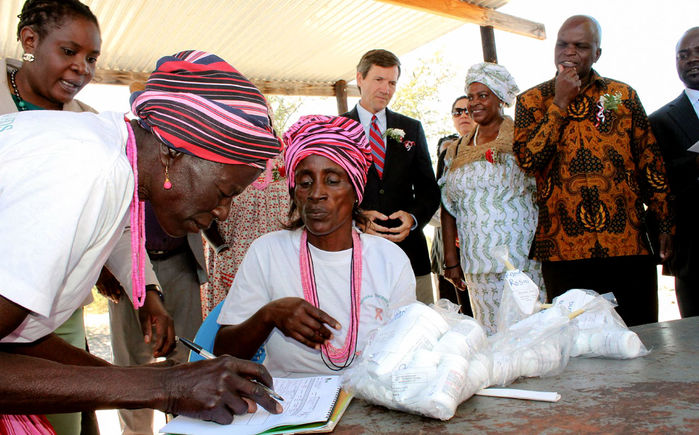 More than 100 community groups in Namibia travel to health centers to pick up antiretroviral drugs and then deliver them to rural communities. RALPH HÖFELEIN/USAID NAMIBIA

A campaign to end AIDS by 2030 is faltering worldwide

The ambitious campaign to “end AIDS” by 2030 is badly off track, officials said at the International AIDS Conference here last week. Funding for efforts to slow the spread of HIV by treating all infected people has flatlined, and many countries, for a host of reasons, can’t or won’t mount aggressive responses. “We will not be able to meet the prevention goal,” said Michel Sidibé, director of the Joint United Nations Programme on HIV/AIDS (UNAIDS) in Geneva, Switzerland. “We have a prevention crisis.”

The news is especially poignant given that other studies presented at the meeting underscored the power of testing and treating entire communities to dramatically slow HIV’s spread. The “incredible successes” in a few countries “really show you what can be done with resources, focus, and partnership,” said Chris Beyrer, an epidemiologist at the Johns Hopkins University Bloomberg School of Public Health in Baltimore, Maryland.

In 2015, UNAIDS set a goal to “end AIDS as a public health threat” by 2030. The campaign rests on a mathematical model that says the epidemic will peter out if enough people keep the virus in check. To pull it off, by 2020, at least 90% of the nearly 37 million people in the world living with HIV must know their status, 90% of them must start treatment, and 90% of treated people must stay on the medication and keep the virus fully suppressed.

To date, few countries have achieved 90-90-90; worldwide, 21.7 million people are now receiving treatment, well short of the number required to meet the 2030 goal. With 1.8 million new infections last year, the world seems unlikely to reduce new infections to 500,000 by 2020, the UNAIDS benchmark, Sidibé said at the meeting.

Several factors contribute to the lackluster performance. UNAIDS says domestic and international HIV funding—$20.6 billion in low- and middle-income countries in 2017—is 20% short of the 2020 benchmark, and there were “no new significant commitments” from donors last year. Stigma and discrimination remain obstacles to testing and treatment, and prevention efforts such as condom promotion and pre-exposure prophylaxis have received short shrift.

A commission of 40 leading HIV/AIDS researchers contends that the end AIDS campaign itself may have contributed to the problem. In the 28 July issue of The Lancet, the group, co-chaired by Beyrer, wrote, the “prevailing discourse on ending AIDS has bred a dangerous complacency and may have hastened the weakening of global resolve to combat HIV.” In particular, the report highlights what it calls an “overwhelming emphasis on HIV treatment” that has led to “chronic underfunding of HIV prevention.”

Some prominent researchers have questioned whether 90-90-90 will lead to the hoped-for drops in new infections. But the strategy can work, and Namibia reported the most compelling  data yet of its power. A southern African country with 2.3 million people and 12% HIV prevalence, Namibia exceeded the 90-90-90 target, reported Minister of Health and Social Services Bernard Haufiku, and new infection rates in the past 2 years have dropped by 40%. Namibia provides “clear evidence” that 90-90-90 works, said Deborah Birx, who heads the U.S. President’s Emergency Plan for AIDS Relief (PEPFAR) in Washington, D.C., a major donor to the country. Unfortunately, Birx says, some other PEPFAR “focus countries” have fallen short of the mark (see graph, below), which ultimately calls for viral suppression in 73% of infected people. (Multiply 90% times three.)

Neighboring Botswana, another major PEPFAR recipient, also has solid evidence that large-scale viral suppression curbs spread. In one of the largest studies to evaluate treatment as prevention, the Botswana Combination Prevention Project compared 15 communities in which every infected person received treatment immediately with 15 others where they received treatment only after there was evidence of immune damage, the standard of care when the study began in 2013. (Botswana began to treat everyone in 2016.) Each group had more than 4000 infected people, and fewer new infections occurred in the aggressively treated arm—57 versus 90, a 30% drop, reported Moeketsi Joseph Makhema from the Botswana Harvard AIDS Institute Partnership in Gaborone.

Another study showed that fully suppressing HIV with drugs virtually eliminates the risk of transmission. Epidemiologist Alison Rodger of University College London and colleagues followed 783 gay couples in which only one partner was infected at the outset. The men reported 76,991 instances of anal sex without a condom, yet only 15 of them became infected. Genome analysis of their newly acquired viruses indicated that in every case, the men had become infected through sex with someone other than the treated partner. If the infected partner is on treatment, “You’d have to have condomless sex for 419 years to have even one transmission,” Rodger said.

Powerful as treatment is at preventing spread, epidemiologist Peter Piot, head of the London School of Hygiene & Tropical Medicine, stressed that it can only work if countries and donors meet the huge challenge of keeping tens of millions of people on lifelong treatment. AIDS won’t truly end until there’s a vaccine, he said, and in the meantime the epidemic could rebound. “International solidarity and funding will be necessary for decades to come. Let’s not fool ourselves.”