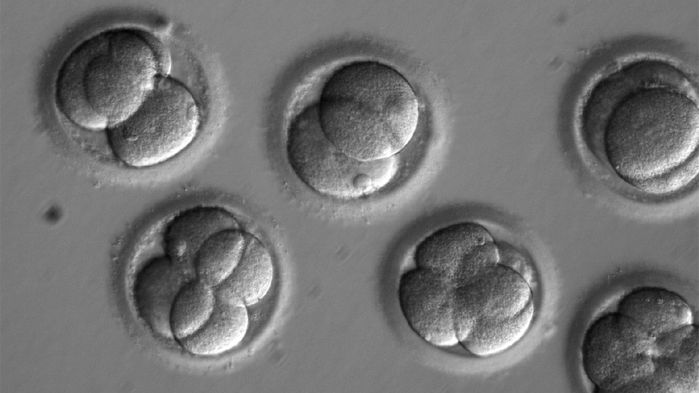 Researchers at Oregon Health & Science University in Portland used the genome editor CRISPR to correct a mutation that causes a heart problem. The embryos were not implanted.   OHSU

The leaders of these powerful scientific societies joined voices after a genome-editing meeting in Hong Kong, China, 2 weeks ago made headlines around the world. At the conference, He Jiankui of the South University of Science and Technology in Shenzhen, China, confirmed news reports that he used the genome editor CRISPR in an attempt to create HIV-resistant people, disabling genes in in vitro fertilization embryos that were then implanted and produced twin girls. The editorial “Wake Up Call from Hong Kong,” published in Science today, denounces the He experiment and calls for scientists and physicians to clarify what constitutes unacceptable genome-editing research.

“To maintain the public’s trust that someday genome editing will be able to treat or prevent disease, the research community needs to take steps now to dem­onstrate that this new tool can be applied with com­petence, integrity, and benevolence,” the academy presidents state. “Unfortunately, it appears that the case presented in Hong Kong might have failed on all counts, risking human lives as well as rash or hasty political reaction.”

To that end, they say international academies of sciences must “quickly” convene experts and stakeholders to create an “expedited report” that spells out criteria and standards for so-called germline editing, DNA modifications to embryos, eggs, or sperm that can be passed on to subsequent generations. Such international standards would complement the national regulations in each country, the authors hope, and would make it less likely that researchers could “seek out convenient locales for conducting dangerous and unethical experimentation.” The authors further call for “an international mechanism”—perhaps an ongoing forum—that scientists could turn to if they had concerns about research that didn’t conform to the agreed on criteria and standards for germline editing.

CAS notably did not co-sponsor the Hong Kong summit, although it did a previous one in Washington, D.C. Victor Dzau, head of NAM, praises his CAS counterpart, Bai Chunli, for co-authoring the editorial with him and Marcia McNutt, president of NAS. “It matters big time that he’s a co-author,” says Dzau, who was born in China but has lived in the United States most of his adult life. “The credibility of scientists and science in China to some extent was highlighted by [He’s experiment]. The Chinese government is now put under a microscope to say where it stands on this. They’re taking it very seriously.”

NAM and NAS have offered to lead the proposed effort. A key challenge for the writers of the expedited report is to put a finer point on one of several widely accepted criteria that many contend He violated: Germline editing must address an “unmet” medical need. “The medical, scientific, and ethical communities need to step up and say let’s make a much better definition,” of what that phrase means, says Dzau, who stresses that he wants to see this human gene editing move forward. Although Human Genome Editing, a report jointly published by NAM and NAS in 2017, did offer examples of unmet medical needs that might justify germline editing, Dzau says more detailed guidelines are needed.

George Daley, dean of the Harvard Medical School in Boston and a co-organizer of the Hong Kong summit, calls the editorial “a thoughtful statement” and agrees that the world needs “a clearer definition of what might be permissible after scientific, medical, and societal considerations are rigorously and thoughtfully considered.” He stresses that it would also help to clarify the “scientific hurdles to be surmounted before considering any clinical use.”

Alta Charo, a bioethicist at the University of Wisconsin Law School in Madison, welcomes the call for international standards and criteria—but says people should recognize that each jurisdiction ultimately will decide whether and how to move forward with germline editing. “For those who decide to move ahead, however, there are better ways to approach clinical trials than the unfortunate effort by Dr. He.”

Only a handful of published experiments have used CRISPR to alter embryos, and none of those researchers had any intent to implant them—and indeed it is illegal in many countries. Sciencecontacted scientists from several of these groups, and none thought germline editing was yet justified. “In the long run, we could not rule out the possibility that we might want to move our work into the clinic,” wrote Jia Chen of ShanghaiTech University in China, who co-authored a paper published in the 7 November issue of Molecular Therapy on correcting a mutation in human embryos that causes Marfan syndrome. “However, we would certainly NOT do that until the following conditions were met: The technical and safety issues have been solved thoroughly, and the benefits of gene-editing therapy exceed its risk by a large margin.”

Shoukhrat Mitalipov, whose lab at Oregon Health & Science University in Portland published a Nature paper that reported using CRISPR in nonimplanted human embryos to fix a heart gene mutation, says scientific advances will determine the timeline for moving forward. “At this point, it’s not a clear path,” Mitalipov says.