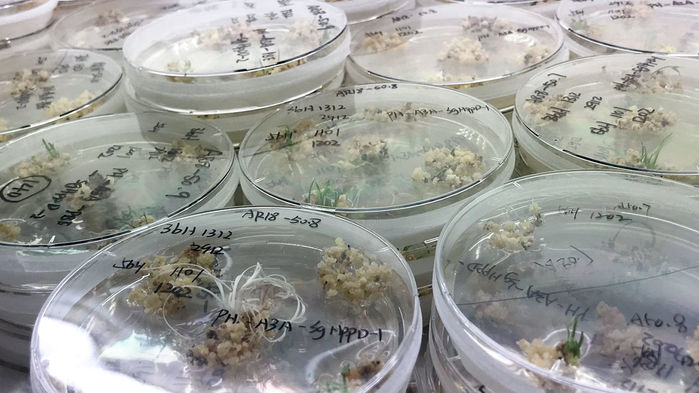 This rice has had some of its DNA bases altered by a form of the genome editor CRISPR, but some of them were not the intended targets.   JON COHEN

Variations of the genome editor CRISPR have wowed biology labs around the world over the past few years because they can precisely change single DNA bases, promising deft repairs for genetic diseases and improvements in crop and livestock genomes. But such “base editors” can have a serious weakness. A pair of studies published online in Science this week shows that one kind of base editor causes many unwanted—and potentially dangerous—“off-target” genetic changes.

The mistakes are still rare overall, says David Liu, a chemist at Harvard University whose team developed the first generation of base editors, and are unlikely to interfere with laboratory uses of the technology. But they are enough to concern anyone contemplating use of the technology in patients, Liu and others say. “The two papers are very interesting and important,” says Jin-Soo Kim, a CRISPR researcher at Seoul National University. “It is now important to determine which component is responsible for the collateral mutations and how to reduce or avoid them.”

In its original form, CRISPR uses an RNA strand to guide an enzyme known as Cas9 to a specific place in a genome. The Cas9 acts as a molecular scissors on the DNA, cutting both of its strands, and the cell’s attempts to repair the brake can disable the gene. Or researchers can use the cut to insert a new sequence of DNA. Base editors instead couple the guide RNA to a Cas9 that only cuts one DNA strand. This molecular complex also includes an enzyme, called a deaminase, that can chemically change one base into another. Because such editors have more control over the specific changes than CRISPR itself, researchers did not expect them to cause off-target errors.

Now, two groups of researchers mainly based in China, working independently on rice and on mouse embryos, have discovered abundant off-target mutations in experiments that used an editor that changes the DNA base cytosine to thymine. A second base editor, also from Liu’s team, that converts adenine to guanine introduced no such mistakes.

In the rice study, a team led by plant biologist Gao Caixia of the Chinese Academy of Sciences (CAS) in Beijing compared the DNA in 77 plants it had altered with different base editors to sham controls or untreated plants. The researchers then assessed the low-level background mutation rates. They found that cytosine-to-thymine base editors roughly doubled the background level of off-target mutations. “We were so surprised, and worried we had to be really, really careful with our results because the whole world will be looking closely,” Gao says. “Fortunately, the other group worked with the mouse and made a very similar observation, and their system, to be honest, is even better than ours.”

In that work, a multi-institution collaboration led by researchers from CAS in Shanghai and Stanford University in Palo Alto, California, developed a clever built-in control by injecting a base editor into only one of two cells in a newly formed mouse embryo. Comparing the progeny of these two cells, researchers found the off-target effects created by the cytosine base editor were more than 20 times more common than the background mutation rate. Some of the mutations occurred in genomic regions that play a role in cancer.

Tweaking that editor’s deaminase or other components could decrease its off-target effects, says J. Keith Joung, a pathologist at Massachusetts General Hospital in Boston who invented a popular cytosine base editor and co-founded both a biomedical and an agricultural base editor company with Liu. Kim is optimistic that the field will promptly figure out solutions for the cytosine editors. “A new problem always provides new opportunities,” he says.

Stanley Qi, a Stanford University bioengineer who has created a variation of CRISPR as well, says it’s no surprise that a new biotechnology has imperfections. “I don’t think these reports diminish my enthusiasm towards base editors or gene editing.”