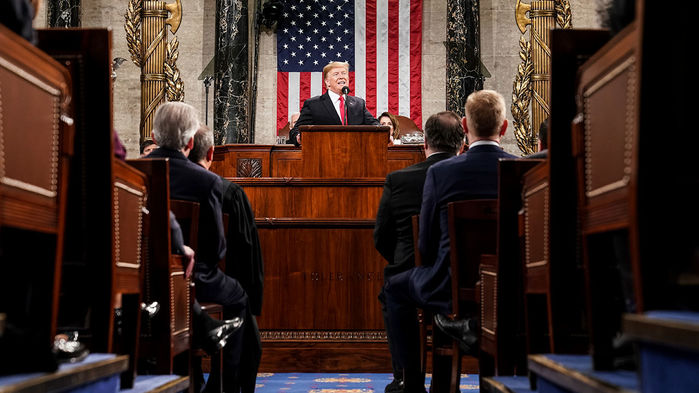 President Donald Trump announced an initiative to end HIV/AIDS in the United States during his State of the Union address.   DOUG MILLS/PICTURE-ALLIANCE/DPA/AP IMAGES

The people who planted the seed that led President Donald Trump to announce a new agenda to end AIDS in his State of the Union address yesterday had no notion that their idea would receive this kind of prime-time attention.

Last summer, a few months after taking the helm of the U.S. Centers for Disease Control and Prevention (CDC) in Atlanta in April 2018, Robert Redfield met with Anthony Fauci, who heads the U.S. National Institute of Allergy and Infectious Diseases in Bethesda, Maryland. One topic of discussion was their vision of how to better coordinate the federal government’s response to the country’s HIV/AIDS epidemic and to help bring it to an end. “We got together and said this can work, let’s start pushing it,” Fauci tells ScienceInsider.

About 2 months ago, Fauci and Redfield took their idea to their boss, Alex Azar, who leads the Department of Health and Human Services (HHS) in Washington D.C., and his top deputy, Brett Giroir. “Alex really, really liked it,” Fauci says. “He said, ‘I think we can bring this to the president.’ We said, ‘Wow, wouldn’t that be interesting.’ The president was very excited about it and said, ‘Let’s do it.’” (Fauci, incidentally, says he has developed friendships with all five previous presidents, but has yet to meet Trump.)

Trump devoted 63 words to the topic in his speech, which left many unanswered questions about what, exactly, the administration plans to do, how much it will cost, and where the money will come from. But this morning, Fauci, Redfield, Giroir, and other health officials took part in a press briefing to better explain their vision.

The push to end AIDS in the United States will concentrate on improving diagnosis, treatment, and prevention efforts in 48 counties; Washington, D.C.; and one municipality in Puerto Rico; those locations account for more than half of the nearly 40,000 new HIV diagnoses each year. “When we originally did this [analysis] and I saw the map of those counties I was shocked that it was only 48 counties out of over 3000 counties in the United States,” said Redfield, who described the new program as “laser focused.” They also will target seven states that account for the majority of infections in rural populations, including Native American communities that have had sharp increases in HIV diagnoses in men who have sex with men.

Fauci acknowledges that even before he met with Redfield, many of the specifics of the plan “were floating around in a very similar way.” Indeed, a similar vision is spelled out in detail in National HIV/AIDS Strategy reports issued during the administration of former President Barack Obama. CDC reports have also documented the hot spots for years. And those maps have helped clarify the problem, Fauci notes. “There’s nothing like, ‘Holy mackerel, there are a lot of infections in this district!’” he says. But he says there’s never been “a concerted, multiagency effort” to address gaps in the federal response with a target date to “end the epidemic as we know it.”

The goal of the new program is to reduce new infections by 75% in 5 years, and by 90% in 10 years. “HIV has cost America too much for too long,” says Giroir, HHS’s assistant secretary of health, who noted that 700,000 Americans have died from AIDS.

Girior won’t specify how much money the initiative would cost, but says Trump’s budget request, expected next month, will ask Congress for new funding. They do not plan to take it from existing HHS programs. “We are very confident we will have the sufficient resources provided in the 2020 budget for us to begin this very aggressive plan,” he says. (Congress will have the final say on any spending.)

Fauci said a key part of the plan is to better coordinate the contributions of 19 Centers for AIDS Research (CFARs) that together receive $45 million a year from the National Institutes of Health. The CFARs, mainly based at universities, conduct multidisciplinary studies on everything from epidemiology to behavioral research and “implementation” science that looks at how best to keep HIV-infected people in care and help uninfected access proven interventions. “The location of the 19 CFARs beautifully overlap—although not completely—with the hot spots,” Fauci says. The CFARs have strong ties to their communities, he says, and they can better coordinate how they work together.

Michael Saag, director of the CFAR at the University of Alabama in Birmingham, welcomes the new initiative and says his counterparts around the country have much to learn from one another and from international efforts. “The CFARs are beginning to form a larger, national group effort to share best practices and ways forward,” Saag says. Douglas Richman, who leads the CFAR at the University of California, San Diego, notes that clinics at CFAR sites often do a good job of providing testing and access to convenient care, but says the “practical issue” is how to reach vulnerable and uninsured people who now are outside the system.

Several advocacy groups have welcomed the push to end AIDS by 2030 in the United States, but they also have raised serious concerns about the Trump administration’s treatment of many of the communities most vulnerable to HIV infection. As the International AIDS Society in Geneva, Switzerland, cautioned in a statement: “We must also acknowledge that this announcement is inconsistent with the policies and rhetoric that directly attack trans people and the larger LGBTQ [lesbian, gay, bisexual, transgender, and questioning] community, people who inject drugs, people of colour, refugees, sex workers and women’s rights.”

Redfield stresses that leaders recognize the epidemic is concentrated in vulnerable communities. “Stigma is the enemy of public health,” says Redfield, adding that transgender people and injecting drug users, in particular, have suffered. “We need to be able to address in a comprehensive way how to destigmatize HIV infection.”

The new plan will put much emphasis on offering anti-HIV drugs to uninfected people as part of a proven strategy called pre-exposure prophylaxis, or PrEP. Giroir says 1.2 million Americans are at high risk of HIV infection and candidates for PrEP, but only 10% receive it. “It’s an astounding and shocking figure that so few are getting an indicated medication, but [it’s] a tremendous opportunity for us to expand the program,” Giroir says. And he says models show that if 60% of these people use PrEP, new infections will drop by 90%.

Giroir urges Congress to support the plan. “This is a public health issue,” he says. “Everybody should be behind this.”