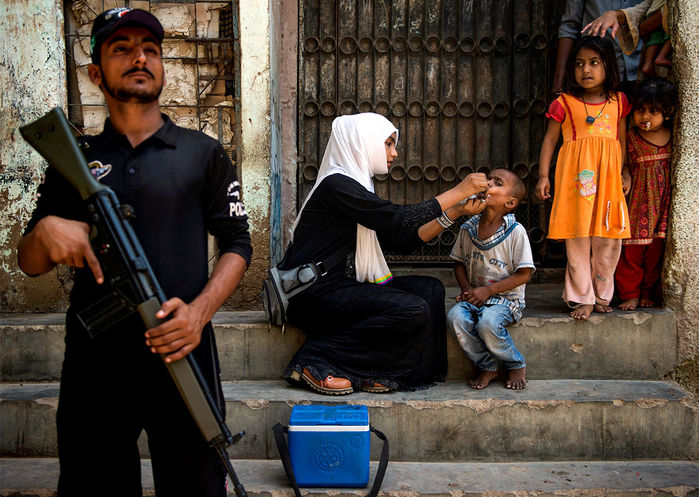 A policeman in Karachi, Pakistan, protects a health worker as she administers a polio vaccine.   ASIF HASSAN/AFP/GETTY IMAGES

In 2003, epidemiologist Nicholas Thomson was doing HIV prevention work in Chiang Mai, Thailand, when the country’s president, Thaksin Shinawatra, launched an aggressive war on drugs. “Thaksin gave permission to extra-judiciously take out what were meant to be drug traffickers, and we lost a couple hundred people out of our prevention trials who weren’t drug traffickers,” says Thomson, who was working with a team from the Johns Hopkins Bloomberg School of Public Health in Baltimore, Maryland. “We were decimated.”

Thomson, who today has a joint appointment with Hopkins and the University of Melbourne in Australia, realized that part of the problem was that the Hopkins and Chiang Mai University research collaboration had not forged strong enough connections with the nation’s police, Ministry of the Interior, and prisons. “I thought this can’t happen again, and I spent the next 10 years trying to go as deeply as I could into the ministries responsible for public security across Southeast Asia to see what the levers were that could be adjusted to get a better public health outcome—without mentioning public health or human rights,” Thomson says. He soon realized that the intersection of public health and security, which involves both the police and the military, reached far beyond HIV/AIDS, and today affects responses to polio, Ebola, Zika, malaria, mental health, bioterrorism, and disasters.

That rarely acknowledged intersection is the topic of a special series of three papers that Thomson coordinated and were published online today in The Lancet. ScienceInsider spoke with Thomson about the topic and the changes he’s advocating. This interview has been edited for clarity and brevity.

Q: It seems like the key points made in these papers is that as much planning and funding as pressing public health problems receive, the link to public security gets short shrift.

A: We need a re-envisioning of the public health architecture. The public security apparatus is enormous. Uniformed soldiers and police have a huge opportunity to support public health endeavors, yet they’re often clashing with public health and human rights actors in particular. If we were able to throw a public health lens over their operational culture, we could enable and sustain public health concepts.

Q: What are some examples?

A: How many times do we see the Global Fund to Fight AIDS, Tuberculosis and Malaria or PEPFAR [the U.S. President’s Emergency Plan for AIDS Relief] running huge programs with epidemics that are concentrated in populations that are criminalized or harassed? None of these agencies are willing to step into the police reform space in any tangible way. Their partners are health people or NGOs [nongovernmental organizations], so they don’t work with police. They’ll fund a small NGO to do HIV sensitization training with the gendarmerie about HIV service needs of sex workers in Cameroon, but the power dynamic between NGOs and police is vast and the trainings are not supported by police policies and strategies from senior leadership. In the back streets of Douala [a coastal city in Cameroon], you have 10, 20 hot spots around the city, each with 200 sex workers operating out of little hotels and all of them are reporting being harassed and having to pay bribes. Unless we engage in this properly, we’ll never get to the end. Considering where the science has progressed to, that’s a travesty.

Q: How can the public health sector better lead this coordination?

A: Public health and human rights people often approach this with tight, evidence-based literature reviews and research studies and say this law and that law is bad for public health. But their audience is the ministry of the interior, and [interior officials] really don’t care. … Public security and police are the most visible representation of the state. Wherever you travel, the first people you see at airports are people in uniform with guns. In most countries they’re meant to uphold national constitutions, and in national constitutions there are universal sets of human rights for the people. You stress that you want these people to represent the values of the state. Or look at prisons, which are not run by public health epidemiologists. They’re run by security guards with no public health training. And they generally don’t know or don’t care [about public health issues]. But you can show them interventions that will be effective for prisoners and improve conditions for guards, decreasing exposure, say, to multidrug resistant TB [tuberculosis]. Surely if you’re a prison guard you’re going to be feeling a little bit better about life.

Q: Doesn’t the World Health Organization have International Health Regulations that call for coordination between security and public health?

A: If we’re just talking about pandemics, the Global Health Security Agenda and related bilateral programs mainly fund traditional pillars: surveillance and field epidemiology. No one funds the security sector. Look at drug-resistant malaria in northern Cambodia. The only public officials there are police, military, and borders and customs officials. There are no field epidemiologists. There’s a real reluctance from public health agencies to engage police and the military and support their potentially huge role in tackling malaria, and it’s a huge risk for further outbreaks. We’re missing the mark.

Q: How would you move your agenda forward?

A: When we have a bush fire or a massive flood, the emergency response often works like clockwork. In pandemic situations, it’s obvious. Brazilian police did mosquito spraying for Zika. But where it’s less obvious is where it gets more interesting. There are things that we can prepare for: We don’t have to wait for Ebola to hit before coming up with plans. And we know we need additional support of police and military in some ongoing projects. Where haven’t we been able to eradicate polio? Afghanistan, Pakistan, and northern Nigeria—the most insecure places. And you’re never going to get to zero cases unless people are secure.

Q: What about the tensions that often exist between public health sectors that are trying to save lives, and police and military in some locales who are sometimes perceived as threatening lives?

A: The mandates are technically different. There is a security or power mandate in military, and in the police its public safety.

For the police, “public safety” is one word away from “public health.” There’s a lack of recognition about how intertwined these mandates are. There’s not much difference between protecting someone from a methamphetamine rampage to seat belt law enforcement to alcohol and drug testing on the road. But in police academies, there typically isn’t even 1 week of training on public health, and the culture is they don’t wake up thinking they’re public health advocates.

Q: But don’t some public health advocates argue that to build trust with the public, they have to distance themselves from police and the military?

A: The tension is exacerbated when we, as public health and human rights people, straight away go on the front foot in an accusatory way. The default perspective is the security sector is the arch enemy—where the militaries go rogue and police routinely do things that violate the public health and human rights. There’s a cross-agency cultural battle that needs to be resolved. And the public health advocates have to have the ability to sit at these dark tables where the security overlay is the authority—prisons, detention centers, conflict settings—and engage. We don’t live in a perfect world. We’re missing a massive opportunity.