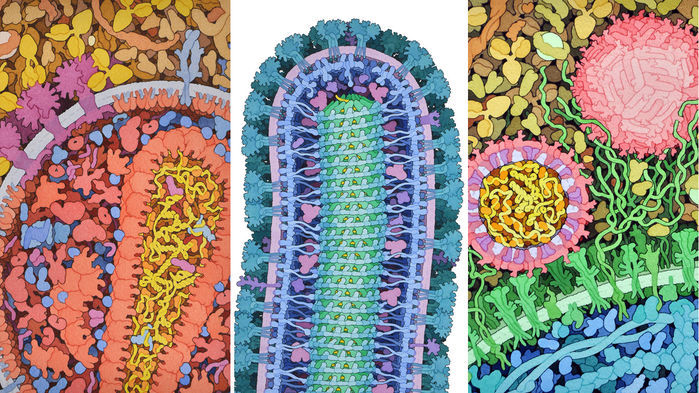 HIV, Ebola, and Zika are ugly, nasty viruses. David Goodsell makes them look beautiful, even alluring. And the unusual precision of his depictions is driven by science—some of it his own research.

Goodsell is a structural biologist at Scripps Research in San Diego, California, and he paints watercolors of viruses and cells with exacting scientific specifications. Many scientists do artwork on the side, but Goodsell’s paintings are tightly linked to his own studies of the molecules that form cells and pathogens. His images have appeared on the covers of many journals, including Science and Cell. He’s also produced four books that feature his paintings (The Machinery of Life, Our Molecular Nature: The Body’s Motors, Machines and Messages, Bionanotechnology: Lessons from Nature, and Atomic Evidence: Seeing the Molecular Basis of Life), educational posters (Tour of a Human Cell, Flu Fight: Immunity and Infection), and a program that the public can access to create their own HIV illustrations (CellPAINT). The Conference on Retroviruses and Opportunistic Infections this year featured his HIV image as its logo.

In addition to studying pictures of cells from high-powered microscopes, Goodsell relies on molecular structures from electron microscopy (EM), x-ray crystallography, and nuclear magnetic resonance spectroscopy to make his paintings, which show the often crowded and complex world of cells and the microbes that infect them. He even uses the known weights of molecules if that’s all he has so that he can at least draw, say, a correctly sized circle. “I’m a scientist first,” he says. “I’m not making editorial images that are meant to sell magazines. I want to somehow inform the scientists and armchair scientists what the state of knowledge is now and hopefully give them an intuitive sense of how these things really look—or may look,” he says.

“These pictures have tons and tons and tons of artistic license,” he says. “They’re just one snapshot of something that’s intrinsically superdynamic. Every time I do a painting, the next day it’s out of date because there’s so much more data coming out.”

Initially trained as an x-ray crystallographer, Goodsell in the early 1980s started to toy with meshing molecular biology with computer graphics programs, which at the time were mainly used by the public for flight simulator games. “No one knew how to use the programs and I became the local expert,” Goodsell says. “I also instantly started having an artistic outlet.”

In 1987, Goodsell came to Scripps to work with a computational structural biologist Arthur Olson. “He was one of the first people in the world doing molecular graphics,” says Goodsell, who also has a joint appointment at Rutgers University.

Goodsell’s office is down the hall from Olson’s, and it looks something like a toyshop, with shelf after shelf filled with 3D models he has made of molecules. “David’s work is an amazing combination of science and art,” says Olson, who is a scientist-artist himself. “The science is as much in his paintings as his artistic ability. The painting is a small part of the work that goes into any of his illustrations. Most of it is literature work in trying to get as accurate and complete a model as currently available for what he’s portraying.”

I want to somehow inform the scientists and armchair scientists what the state of knowledge is now and hopefully give them an intuitive sense of how these things really look—or may look.

Goodsell wanted to have more of a “biological connection” to some of the arcane problems he was studying—a 1987 paper he published with Olson is titled “Rendering of Volumetric Data in Molecular Systems”—so he picked up a pen in the early ’90s and started to do ink drawings. “I wanted to get back in touch with biology so I set myself a challenge: Could I draw a picture of a cell blown up with everything in the right place?” he says. “I settled on [the bacterium] E. [Escherichia] coli because at the time there was the most data to support that. There really was just barely enough data to do a convincing job. I spent a lot of time using the citation index in the library chasing down molecules one at a time to find concentrations.”

Those drawings led him back to the watercolor painting he learned from his grandfather. “The colors are completely made up,” he says, noting that most proteins have no color. “I just use colors that I like and colors that I think will allow you to distinguish different functional compartments.”

Janet Iwasa, a lapsed cell biologist who runs the Animation Lab at the University of Utah in Salt Lake City, says Goodsell’s work has had a far-reaching impact on other artists who depict science. “Most molecular animators, people like me, consider him to be the father of our field in terms thinking about molecular visualization in a scientifically accurate way,” Iwasa says. “He led the way.”

Iwasa says Goodsell’s use of watercolors markedly differs from the more common computer-generated scientific illustrations (which he also does). “There’s something a little bit cold about visuals created with computers,” she says. “I like the way his paintings look like they’re created by a human being. They’re reminiscent of the fact that science is done by humans, by scientists, and it’s less something that’s a complete fact, but something we’re envisioning, a hypothesis in the human mind. The hypothesis of what’s inside a human cell is a human creation.”

Both Iwasa and Goodsell have done detailed depictions of HIV’s life cycle as part of separate, but connected, consortia (the Center for the Structural Biology of Cellular Host Elements in Egress, Trafficking, and Assembly of HIV and the HIV Interactions in Viral Evolution Center) that they belong to that focus on clarifying how the proteins of the AIDS virus interact with human cells. Compare and contrast Iwasa’s animated vision of the process (above) with Goodsell’s series of paintings:

Olson notes that traditional medical illustrators use “a variety of illustration tricks” to make things clearer. “When you see a drawing of an organ, you don’t see a bunch of blood all over the place,” Olson says. Goodsell’s use of watercolor, he says, serves the same purpose. “His colors are really quite informative,” he says.

Helen Berman, a structural biologist at Rutgers University in Piscataway, New Jersey, says a key aspect to Goodsell’s work is that he makes science accessible to a wider audience. Berman previously ran the Protein Data Bank, an online database holding the structural information and 3D shapes of proteins, and it long has featured a “Molecule of the Month” image that Goodsell computer generates (but he uses some medical illustrator tricks to make them look hand drawn).

“He has that talent to show the right part of things and in the right context,” says Berman, who has one of his paintings in her living room. “I have a huge appreciation for his work.”

As technologies continue to improve, Goodsell says the resolution of the mesoscale he depicts—10 to 100 nanometers—becomes sharper and sharper. In particular, cryo-EM, the Nobel Prize–winning advance that interrogates frozen samples of molecules, has revolutionized how he does his job. “I’m working here between atoms and molecules and cells and there’s not a really good experimental way yet to see that level,” Goodsell says. “I very much enjoy that I’m making this realm visible that isn’t really accessible. But when cryo-EM gets to the level that it can see this, my hope is it will look similar to what I’ve envisioned. And it’s putting me out of business. Pretty soon we won’t have to make it up anywhere.”