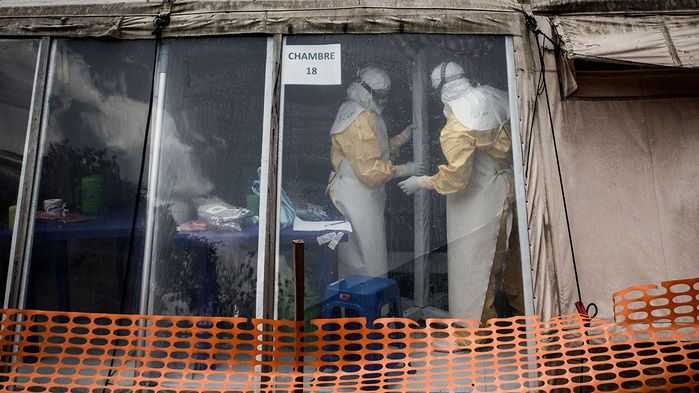 Health workers at an Ebola treatment center in the Democratic Republic of the Congo, which was attacked earlier this year by armed men JOHN WESSELS/AFP/GETTY IMAGES

Ebola outbreak in Congo still not an international crisis, WHO decides

No need to sound the world’s loudest public health alarm bell about the lingering Ebola outbreak in the Democratic Republic of the Congo (DRC), an expert panel convened by the World Health Organization (WHO) in Geneva, Switzerland, decided today. The controversial decision not to declare what is known as a Public Health Emergency of International Concern (PHEIC) comes as the outbreak has sickened at least 1206 people, killing 63% of them.

A recent spike in cases had prompted WHO Director-General Tedros Adhanom Ghebreyesus to convene the 11-member panel. It considered, for a second time, whether WHO should take the rare step of declaring the outbreak a global emergency, which can impact disease surveillance plans, travel, and trade. WHO adopted the PHEIC concept in 2005, and has invoked it just four times: for pandemic flu in 2009, polio eradication in 2014, the West African Ebola outbreak in 2014, and the Zika virus outbreak in 2016.

Some public health experts believe WHO needed to take the dramatic step in order to draw greater attention—and funding—to fighting the DRC Ebola outbreak, which is centered in two conflict-ridden provinces the country’s northeast. Cases began to surface  in August 2018, and the outbreak is now second in size only to the massive Ebola epidemic that devastated three West African countries between 2014 and 2016.

“We have an Ebola gas can sitting in DRC that’s just waiting for a match to hit it,” says epidemiologist Michael Osterholm, who directs the Center for Infectious Disease Research and Policy at the University of Minnesota in Minneapolis. “It could blow substantially in this area any time soon.”

The panel, however, “almost unanimously” agreed that there would be “no added benefit” to declaring a PHEIC, said its chair, epidemiologist Robert Steffen of the University of Zurich in Switzerland, at a press teleconference today. A number of organizations, including WHO, the DRC’s Ministry of Health, and nongovernmental groups, are doing “excellent work” to contain the outbreak, he said. “Although there was great concern about the rising numbers in some regions, the outbreak has not spread internationally and that’s now over many months.”

The committee did, however, urge public health groups to “redouble efforts” to detect cases, prevent transmission in health care facilities, and find and vaccinate anyone who was in direct or indirect contact with a person who became ill. “We do not mean at all that we can lean back and relax,” Steffen says.

Funding a point of conflict

WHO will accept the committee’s advice and will not declare a PHEIC, said its director-general, who goes by Tedros. But he stressed that the response needs an additional $104 million to close a funding gap and carry out its plans through the end of July. “We’re calling on the international community to step up its commitment on ending the outbreak,” Tedros said. “We cannot intensify our efforts if we do not have enough funds. The current funding gap has meant that we have had to slow down preparedness activities in neighboring countries.”

Osterholm was “surprised and disappointed” by the committee’s decision. “I have read, reread, and discussed at length what the conditions are that would” justify declaring a PHEIC, he says, and the DRC outbreak “fully meets the conditions. … The funding gap alone should tell you the world is not understanding the public health importance here and the emergency nature of this. WHO is sending a message that we’re concerned but it’s business as usual, and I don’t see anything as business as usual here.”

But, Steffen said, “It would not be appropriate to declare a PHEIC just to generate funds.” And Jeremy Farrar, who runs the Wellcome Trust in London, agrees that a PHEIC should not be invoked to raise money.

“Money is not hampering the response currently,” says Farrar, who visited the region in January. And declaring a PHEIC, he says, is a “really nuanced decision” that could even backfire—increasing fear and damaging badly needed trade in the region, for example. “Whether a PHEIC is called or not is a secondary issue,” he says. “What is needed is a rapid, evidenced-based evaluation of what has been working, and to enhance those responses as fast and as aggressively as possible. We must also ask what has not been working and why, and plan changes to these to increase their impact, and bring in new interventions. Without this we will not see a different result in the DRC.”

WHO today also released, for the first time, information about the impact of the still experimental Ebola vaccine, which is made by Merck of Kenilworth, New Jersey. Public health workers have been administering the vaccine in an attempt to create “rings” of immunity around infected individuals. So far, they’ve vaccinated 97,000 people, and a preliminary analysis shows the vaccine’s efficacy is 97.5%. During the West African epidemic, a formal study of the vaccine—which contains a gene for an Ebola surface protein stitched inside of a virus that affects farm animals but is harmless to humans—found it offered 100% protection 10 days after people received the shot. (That is how long it takes for a person to develop a robust immune response.)

Vaccine teams in the DRC created vaccine rings around 776 cases. But security concerns—there are 20 armed insurgency groups in the area—and community reluctance to be vaccinated have prevented vaccine teams from creating rings around 175 cases. Of the 71 Ebola cases that occurred in vaccinated people, only 15 became ill 10 or more days after receiving the shot. None of those 15 people died.

In the 56 people who became ill within 10 days of being vaccinated, there were nine deaths, far less than expected, a strong indication that they received partial protection. “This vaccine is highly effective,” said Mike Ryan, executive director of WHO’s health emergency program and a participant in the teleconference. The challenge is “to get the message to communities.”