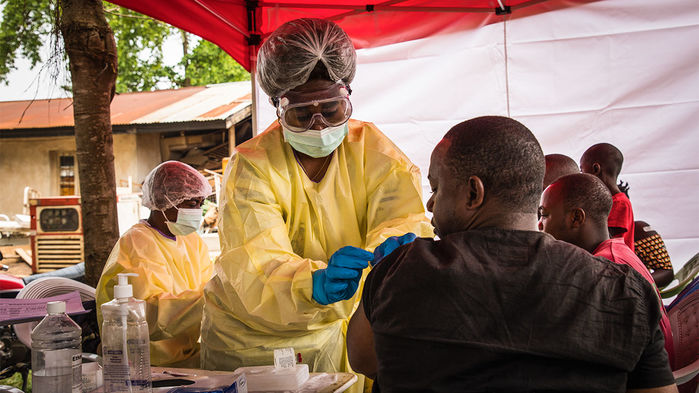 The Democratic Republic of the Congo (DRC) will expand its use of the experimental Ebola vaccine that more than 110,000 have already received to try to stop an unusually stubborn outbreak of the disease. New vaccination strategies will attempt to reduce the security risks faced by health care workers in the outbreak region, which is home to nearly two dozen rebel groups—some of which have attacked response teams.

There’s also a bit of good news in this bleak situation: A new analysis of the vaccine dose needed to protect people found that the amount can be substantially reduced—by more than half for some people—essentially eliminating a long-standing concern about a potential vaccine shortage.

The changes follow recommendations made today by a group of vaccine experts that advises the World Health Organization (WHO) in Geneva, Switzerland. The 9-month-old outbreak in the northeastern region of the DRC as of 6 May had sickened 1506 people, 1045 of whom have died. (Only the Ebola outbreak that exploded in West Africa in 2014 had more cases and deaths.) The outbreak has spiked over the past month, with more than 400 new cases in April alone—a doubling from March—which WHO says reflects the recent disruption of the response because of violence.

A preliminary report issued last month by WHO showed the vaccine has been extremely effectivein people who received it, and it has become a cornerstone in the effort to contain the outbreak. But so far, response teams have only offered the vaccine to people who came in direct contact with a known case or were a contact of a contact. Vaccinating only these two “rings” of people around cases—as opposed to, say, entire towns or regions—theoretically can stop spread with a limited vaccine campaign. But it hasn’t so far in the DRC. In its report released today, WHO’s Strategic Advisory Group of Experts (SAGE) on Immunization expresses its “grave concern” about the worsening epidemiology and recommends adding a third protective ring: everyone in a community—defined as a village or a neighborhood in a city—where a case occurs, regardless of contact history.

WHO’s Ana Maria Henao Restrepo, who leads the vaccine effort in conjunction with the DRC’s Ministry of Health, says she hopes doing so will also reduce tensions about the shot, which some communities have resisted in part because of confusion about why some were eligible and others were not. Rather than going house to house, Henao Restrepo says, vaccination teams will now work at special sites, protected by security teams, like the health center in an affected village or city neighborhood. This will also simplify the informed consent process by allowing health care workers to educate groups of people, instead of individuals, about the jabs’ risks and benefits. “So instead of using, for example, 15, 20 minutes per person, now you use 15, 20 minutes for 15 people,” she says.

Merck of Kenilworth, New Jersey, makes the vaccine, which contains a harmless vesicular stomatitis virus (VSV) engineered to carry a gene for an Ebola virus surface protein. One month ago, Merck said it had shipped 145,000 doses of the vaccine to WHO and had another 195,000 doses in its stockpile. In addition to the DRC, health care workers in neighboring Uganda and South Sudan have been receiving the vaccine in case the virus jumps borders. Merck has applied for regulatory approval of the vaccine, which first proved its worth in a clinical trial staged in Guinea 3 years ago, near the end of West African epidemic.

To Henao Restrepo’s surprise, a recent analysis revealed that WHO, in effect, has “much more vaccine” than it had calculated, she says. As part of the approval process, Merck submitted the vaccine to the U.S. Food and Drug Administration (FDA), which the company optimized to improve its shelf life. FDA found the vials had twice the dose that was given in Guinea, which means the existing stockpile will go twice as far.

With SAGE’s approval, WHO now plans to use an even lower dose for the third ring, extending the vaccine even further. The VSV in the vaccine copies itself, and the Guinean study found that with a dose of 0.5 milliliters, it takes 10 days to properly immunize someone. But studies have shown that a 0.2-milliliter dose will trigger the same level of protective antibodies in 28 days, which WHO thinks is sufficient for people in that third ring.

All told, says Henao Restrepo, these new strategies mean WHO has about 1 million doses of the vaccine available. “I had a glass of wine last week to celebrate that,” she says.

A broader vaccine program for people at lower risk still may soon launch, too, with a different experimental product. The SAGE recommendations call for offering an Ebola vaccine made by Johnson & Johnson of New Brunswick, New Jersey, to everyone in a DRC “health zone” that has a case of the disease, or even those in neighboring health zones. This will potentially protect even more people without affecting the stockpile of Merck vaccine, and also offers a real-world chance to test the Johnson & Johnson vaccine. The vaccine requires two shots of different formulations that researchers hope trigger a more durable immunity than the Merck vaccine, potentially helping to thwart future outbreaks in the region.

Michael Ryan, executive director of WHO’s Health Emergencies Programme, stresses that political and religious leaders in the area have to compel the insurgents in the area to stop attacking health care workers and the facilities where they treat people. On 19 April, Richard Valery Mouzoko Kiboung, a Cameroonian epidemiologist working for WHO, was shot and killed, and Doctors Without Borders in February had to evacuate staff from two of its Ebola treatment centers after they were attacked. The insurgents, Ryan says, “have to stop playing games with our lives and the lives of their own people.”