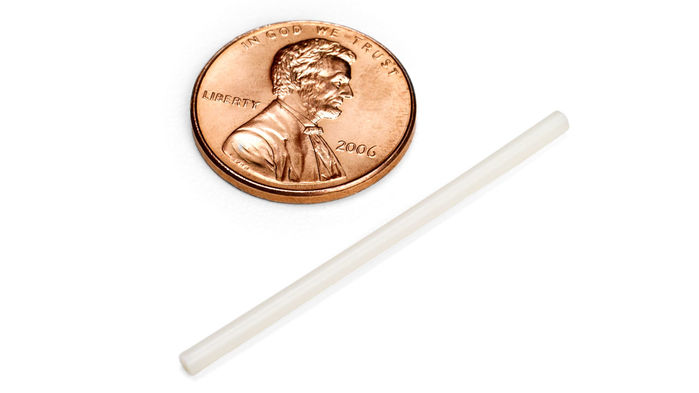 New implant could be ‘game changing’ for HIV prevention

People not infected with HIV can take a daily pill to prevent themselves from contracting the virus, a proven strategy called pre-exposure prophylaxis (PrEP). But many people who start PrEP do not stick with it or take the pills only intermittently, undermining its effectiveness. This week, at the International AIDS Conference in Mexico City, the pharmaceutical giant Merck & Co. reported a potential solution: a slow-release implant of an experimental antiretroviral (ARV) drug designed to be long-lasting in the body. The combination promises to provide an effective HIV shield for 1 year or more, far longer than any ARV now on the market. It’s one of several novel ARV strategies moving forward that offers potentially simpler options for treating or preventing HIV and, if widely used, could change the course of the AIDS epidemic.

“An implant for 1 year has enormous potential,” says Anthony Fauci, who heads the National Institute of Allergy and Infectious Diseases in Bethesda, Maryland. The Merck study included just 12 people, but Fauci says that if the implant proves safe and effective in large-scale studies—and it may fail, as many promising experimental drugs do—“that could be a game-changing advance.”

To develop a PrEP regimen that does not require daily pills, Merck tested two doses of its compound, MK-8591 or islatravir. The company packaged MK-8591, which inhibits an enzyme HIV needs to replicate, in slow-release implants, much like those used for contraception. In the study, the researchers placed implants under the skin of people who were not infected with HIV and the devices released the compound over 12 weeks before being removed. Four weeks later, the researchers measured MK-8591 levels in participants’ blood. In the six people who received the higher dose, the levels remained so high that the investigators projected the implant could thwart infection for 12 to 16 months. No safety issues surfaced, the researchers reported at the meeting.

Fauci says a long-lasting implant that slowly delivers a potent ARV might be the next best thing to an HIV vaccine, a goal researchers have pursued without success for 25 years. “This is a highly effective vaccine for 1 year,” Fauci says. “If we had a vaccine this effective—wow.”

Merck acquired MK-8591 in 2012 from Yamasa, a Japanese company best known for making soy sauce. George Hanna, a vice president at Merck in Upper Gwynedd, Pennsylvania, who heads the company’s infectious disease division, says the compound lasts unusually long in the blood once released by the implant because, in part, it has a fluorine atom that helps it resist degradation. In September, Merck plans to launch a 250-person prevention study of a once-a-month pill formulation of the same compound.

Although MK-8591 could be used by itself to prevent HIV infection—and a monkey study published in the 8 June issue of The Journal of Infectious Diseases supports this—to treat people already infected with the AIDS virus it would have to be combined with other drugs to prevent the emergence of drug resistance. Merck tested a pairing of MK-8591 with two other ARVs over 24 weeks in 121 HIV-infected people. The experimental drug combination proved safe and as effective as an approved three-drug treatment regimen, even at extremely low doses of MK-8591, Hanna says. They then switched everyone in the study who had fully suppressed their HIV to MK-8591 plus just one of the other two drugs. Over the next 24 weeks, this two-drug combo held down HIV as effectively as a three-drug regimen used as a comparator. Hanna says Merck is now looking for other long-lasting drugs to pair with MK-8591 in pill form, to create an oral treatment with infrequent dosing.

One long-acting ARV treatment strategy has already performed well in large clinical trials. In April, the combination of drugs, the experimental cabotegravir and the approved rilpivirine, received what’s known as a “priority review” from the U.S. Food and Drug Administration, which means it could come to market by the end of the year. The combination is also being tested as a preventive, but those trials are not as far along.

Made by ViiV Healthcare—a London-based joint venture of the pharmaceutical companies GlaxoSmithKline, Pfizer, and Shionogi—the two drugs are given once every 4 weeks as separate intramuscular injections into the buttocks. “For some people who hate taking pills or can’t get it together or are worried about stigma and don’t want to be seen taking pills, being able to do something once a month might be easier for them,” says Ann Collier, an infectious disease specialist who stages ARV clinical trials at the University of Washington (UW) School of Medicine in Seattle. “There’s clearly a need for alternatives to oral therapies.”

But a nationwide study of monthly cabotegravir and rilpivarine injections in people who have a history of “nonadherence” to ARV pills is not going as well as Collier had anticipated. “The very people who need it the most are the most challenging,” says Collier, who is running one arm of the multisite study. “They don’t show up for appointments.” Issues that complicate the lives of some HIV-infected people who Collier and many other clinicians in the United States treat include poverty, homelessness, substance abuse, discrimination, and mental illness.

Working with UW’s Rodney Ho, a pharmacologist who specializes in nanotechnology, Collier for the past decade has been developing long-acting versions of ARVs already on the market. They’ve developed formulations that are designed as user-friendly subcutaneous injections, which are simpler to administer than intramuscular shots. “People could do it at home, like in diabetes,” Collier says. “It might be less onerous.” Collier hopes to launch a clinical trial within a few months.

But ViiV injectables are the only long-acting ARVs likely to come to market anytime soon; the new Merck compound must still pass through large-scale efficacy trials. “We think we are at least 3 years ahead of our competitors,” says ViiV’s Kimberly Smith, who heads global research and medical strategy.

Taking pills less often for HIV treatment may soon become an option, too. A study conducted by France’s national HIV/AIDS agency, also presented in Mexico City, recruited more than 600 people who were fully suppressing the levels of HIV in their blood by taking various standard ARV three-drug regimens. Half the participants continued to take their pills each day, while the other half took them only 4 days a week. After 16 months, more than 95% of the people in each group still controlled their infections. This could make treatment less burdensome, less expensive, and less toxic.

Another drug-simplifying study presented at the Mexico City meeting found that a two-drug combination of dolutegravir and 3TC—which came to market in April as a single pill but is not recommended as a “first-line” treatment—was “not inferior” to a standard three-drug cocktail over the course of 96 weeks. Many HIV-infected people now take one pill a day that combines three drugs, so the main advantage to a regimen that combines two drugs instead of three is it potentially would have fewer side effects. HIV may more quickly develop resistance with two drugs, but none surfaced in the study. “Philosophically, it’s a great idea, but I’m a little skeptical,” Collier says. Other attempts to move from three ARVs to two have not panned out, she notes.

Smith says the ultimate benefit of a two-drug regimen is reducing toxicities from longtime exposure to an unnecessary ARV, a benefit that could take years to see. “This is changing the paradigm of the three-drug regimen,” Smith says. “We think that with time, people will catch on and be increasingly intrigued by it.”