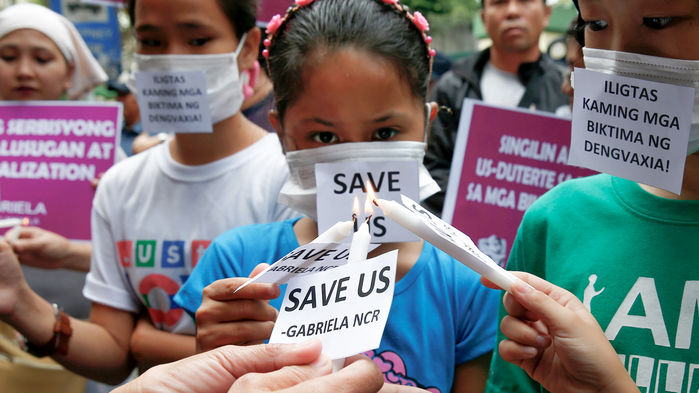 Public health experts are debating how to help the 1 million children in the Philippines who received a new vaccine against dengue that could, in rare cases, sicken rather than protect them. The country launched a campaign in 2016 to vaccinate schoolchildren against the mosquito-borne virus, which can cause high fevers, muscle and joint pains, and rashes. One year later, the campaign was suddenly halted after the vaccine’s producer, Paris-based Sanofi Pasteur, announced it could, in rare cases, trigger severe, potentially fatal forms of dengue in children who became infected with the virus despite their vaccination.

Now, critics of the vaccine, named Dengvaxia, say researchers should try to identify those at increased risk of harm, which might save their lives. But Sanofi Pasteur has no plans to conduct a big, complex study, although it is following the fate of about 1% of the vaccinated children for 5 years. “I’m pretty alarmed by the lack of interest,” says retired dengue researcher Scott Halstead, who worked at the Uniformed Services University of the Health Sciences in Bethesda, Maryland, for many years.

Although an epidemic now underway in the Philippines that has sickened nearly 170,000 people likely will have little impact on the frequency of this rare event, it has brought the issue into sharper focus. Halstead calculates that some 500 Filipino children annually could develop severe dengue because of their earlier vaccination with Dengvaxia.

The danger stems from the fact that the dengue virus has four distinct variants, or serotypes. More than 40 years ago, Halstead found that people who had antibodies against one serotype had a much higher risk of developing life-threatening disease, including shock or hemorrhagic fever, if they later became infected by a second serotype. He explained this increase in severe dengue by an unusual immune phenomenon called antibody-dependent enhancement (ADE). Halstead has long cautioned that Dengvaxia, which triggers production of these antibodies, might have the same effect in people not fully protected by it.

Debates continue about whether ADE is a real phenomenon, but Halstead says trials of Dengvaxia, run in 10 countries, confirmed his concern: Younger children, especially those between 2 and 5 years of age, who did not have dengue antibodies prior to receiving the vaccine—so-called seronegatives—were at an increased risk of ending up in the hospital if they received the vaccine and then got dengue anyway. (The vaccine only offers about 60% protection.) Sanofi agreed the vaccine shouldn’t be used in this age group, but said ADE might not have driven the rise in severe disease. What’s more, older children did not seem in danger, and given the potential public health benefits, a World Health Organization (WHO) panel in 2016 endorsed the vaccine for ages 9 to 45. That led the Philippines to launch a big Dengvaxia campaign—the first country to do so—on Luzon island.

But in November 2017, Sanofi announced that new data showed seronegative children who were vaccinated had an increased risk of severe disease regardless of their age. Sanofi and WHO immediately recommended that Dengvaxia not be used in seronegatives at all. The government halted the campaign and later revoked Sanofi’s license for Dengvaxia. Politicians, health officials, and researchers have been accused of colluding with the company to rush the product to the market—and some parents have filed lawsuits, alleging that Dengvaxia led to the deaths of their children.

Leonila and Antonio Dans, clinical epidemiologists who are married and both work at the University of the Philippines in Manila, say every vaccinated child should be tested to identify those who remain seronegative for the wild type virus. (Virus-triggered antibodies are distinct from those created by vaccination, although distinguishing the two would require a new and complicated assay.) Parents of these seronegative children could be warned to immediately seek medical care if they suspect a dengue infection, they say—and the vaccine could not be wrongly blamed for harm to children in the other group.

But the couple has had difficulty finding financial and logistical support for their proposal. “I’m frustrated,” Leonila Dans says. “The parents of children who have received the vaccine are completely terrified, and I think the children are also affected.”

Sanofi is following the health of more than 10,000 vaccinated children in the Philippines for 5 years, says Cesar Mascareñas, who works in global medical affairs at the company’s Mexico City office. But their serostatus prior to vaccination wasn’t assessed, so Sanofi won’t know whether those who develop severe dengue were put at higher risk by ADE. “We are not trying to answer [that] question,” says Mascareñas, who adds that the company is exploring other mechanisms. He notes, too, that good supportive care, provided early on, can help save patients.

A study in 1500 children who received Dengvaxia on the island of Cebu might offer some clues about Dengvaxia’s risks. The study researchers, partially funded by the U.S. National Institutes of Health (NIH), took blood samples before vaccination began, so they can determine who was seronegative. But because dengue incidence on Cebu is high, fewer than 200 children in the study are likely to have escaped earlier infections. That will make ADE hard to detect, says In-Kyu Yoon, who heads the Global Dengue & Aedes-Transmitted Diseases Consortium in Bethesda and is a consultant to the study. “If there are a lot of cases over a short period, there might be some signal,” Yoon says.

To the dismay of Halstead, Leonila and Antonio Dans, and others, some doctors in the Philippines want to give Dengvaxia another chance, because the country is now battling a major epidemic. Sanofi in fact in late July appealed to the government to relicense the vaccine, to be administered only after antibody tests. But the vaccine requires three shots given over a period of 1 year, which is too long to have an immediate impact, Anthony Dans says. He says he doesn’t want to see history repeat itself with an immediate dilemma driving the decision. “We rushed it then, and the vaccine is of no use for the current outbreak,” Dans says. “Let’s take our time.”

Dengvaxia can still potentially benefit a carefully chosen population. That’s why the U.S. Food and Drug Administration on 1 May approved the vaccine with tight restrictions, limiting its use to children between the ages of 9 and 16 who have laboratory evidence of a prior dengue infection and live in areas where the virus is endemic. Puerto Rico and a handful of other U.S. territories have endemic dengue.

Halstead suggests a new candidate dengue vaccine that NIH is testing in 17,000 people in Brazil could offer protection to vaccinated Filipino children at risk of ADE. Whereas Dengvaxia mainly triggers antibody production, the NIH vaccine stimulates a robust T cell response, which Halstead believes is the key to protection—and would avoid ADE. “There’s an awful lot of just shuffling around,” he says. “We should roll up our sleeves.”