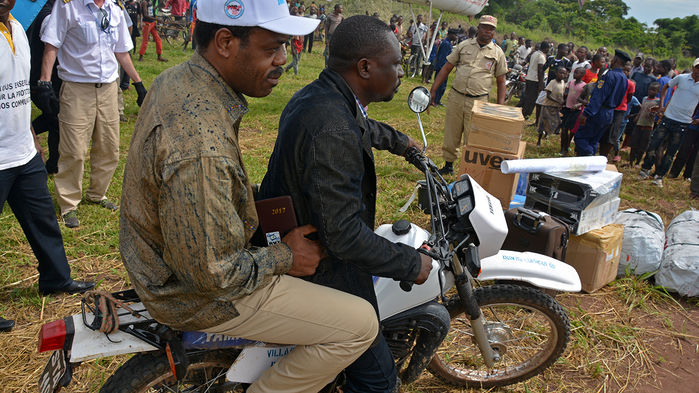 Police in the Democratic Republic of the Congo (DRC) have arrested the former health minister, Oly Ilunga Kalenga, for allegedly mismanaging $4.3 million in Ebola response money. The 14 September arrest came on the same day that an unprecedented high-level delegation of U.S. government health officials met with the DRC’s president and other leaders in Kinshasa to discuss the 13-month-old Ebola outbreak, which is the second largest in history.

There’s no obvious link between the two events, but worries have steadily increased over the past few weeks that shortfalls in funding could hamper the country’s efforts to end the outbreak, which has killed two-thirds of the 3100 people who have developed the disease.

Ilunga resigned in July after DRC President Félix Tshisekedi shifted control of the response away from him. Ilunga was arrested in Kinshasa because he was planning to flee across the river to the Republic of Congo to avoid charges of mismanaging the funds, according to a police statement. Ilunga’s lawyers have strongly denied the allegations, which they called “scandalous” and “defamatory” in their own statement. The country’s inspector general had overseen the Ebola funding, they noted, and stressed that $1.9 million of the total came to the ministry after Ilunga resigned. “He firmly reaffirms his innocence in this affair and promises to defend himself with the utmost energy for his honor,” they wrote, stressing that the money under his watch had been used exclusively for the Ebola response.

Tshisekedi met with U.S. Secretary of Health and Human Services Alex Azar, who visited Kinshasa with a team including Robert Redfield, director of the Centers for Disease Control and Prevention (CDC); and Anthony Fauci, director and head of the National Institute of Allergy and Infectious Diseases (NIAID). The U.S. government is the biggest funder of the Ebola response, having provided $158 million in aid and $238 million in technical assistance. The delegation came to “assess the situation on the ground,” the Department of Health and Human Services in Washington, D.C., said in a statement. The U.S. government helped develop and purchase an experimental Ebola vaccine, which now has been given to 220,000 people in the DRC. Officials contend the vaccine has helped slow the spread of the deadly virus. NIAID separately helped develop Ebola treatments that preliminary data suggest are saving lives.

This Ebola outbreak has dragged on so long in part because armed militias have repeatedly burned down treatment centers and even killed health care workers, forcing repeated interruptions in the response.

The U.S. delegation later traveled to North Kivu province, the conflict-ridden northeastern region of the country that began to battle an Ebola outbreak in August 2018. It also met with officials in Rwanda and Uganda, which border North Kivu. “Until this outbreak is over, it will remain a top global health priority for the United States,” Azar said at a telephone press conference today. Azar said in contrast to earlier reports that CDC was not sending its response teams to North Kivu Ebola hot spots because of security concerns, no policy prevents U.S. government employees from traveling to the front lines to help in the response—and some are there. “The ambassador and the regional security officer continue to evaluate security on a territory by territory basis,” he said.

Two weeks ago, António Guterres, secretary-general of the United Nations, headquartered in New York City, visited the DRC to meet with Tshisekedi and visit Ebola treatment centers. Guterres warned during his visit that there was an “extremely serious” problem with donors only providing 15% of the $278 million they had pledged to fund the response through the end of this year. “When there is no cash, even if there are promises, the Ebola response stops,” Guterres said. “And if we lose a week in the response to Ebola, we do not lose a week: we can lose the war against Ebola.”

The World Health Organization (WHO), the lead U.N. agency coordinating the international response to the DRC’s Ebola outbreak, needs about $162 million of that money. As of today, it has received $58.8 million, according to its media office. Over the past 10 days, Science has repeatedly sought to obtain information about which donors have not fulfilled their pledges, but neither WHO nor the U.N. media offices have provided the information. WHO also did not respond to repeated requests to speak with an expert about the impact of the funding shortfalls.

Rebecca Katz, a global health security specialist at Georgetown University in Washington, D.C., has created a database called the Infectious Disease Atlas that tracks funding. Her team has had a difficult time deciphering the details of the response to the DRC’s current Ebola outbreak. “I don’t think anyone does careful accounting,” Katz says. “It’s messy.” She says it’s not only unclear who has pledged what, but many donors do not spell out exactly who receives the funding, be it WHO or a nongovernmental organization. “There’s not a little but a lot of fudging,” she says.

On 17 July, WHO declared a rare Public Health Emergency of International Concern about the DRC’s Ebola outbreak, but Katz says she cannot determine whether this loud alarm bell led donors to contribute more. “We used to think if you make the declaration, funding will start to flow,” she says. “It’s not clear.”

At the press conference today, Azar said the U.S. government and other major donors are “very focused on the integrity and accounting of the disbursement of the significant amounts of money that are dedicated to this response effort,” adding that “we will continue to work on ensuring the integrity of the flow of those funds.”

Azar closed by emphasizing the U.S. government has a long-term commitment to help the DRC stabilize the volatile country and battle this Ebola outbreak. “We were there before the first Ebola case,” he said, “and we will be there for the people of the DRC after the last Ebola case.”