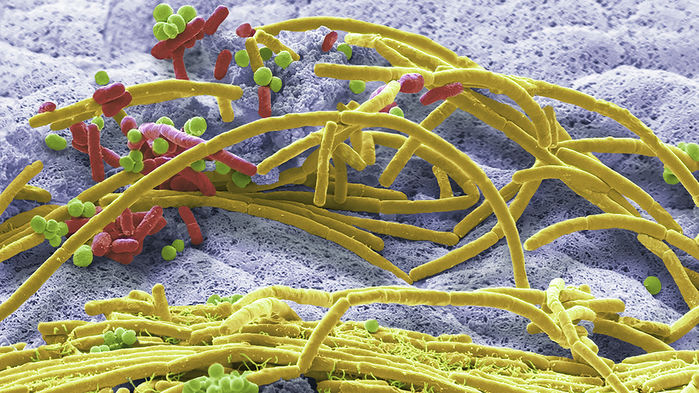 Microbiome. Coloured scanning electron micrograph (SEM) of bacteria cultured from a fingertip. There are around 1000 species of bacteria from 19 phyla found on human skin. Skin flora is usually non-pathogenic, and either commensal (not harmful to their host) or mutualistic (offer a benefit). One benefit bacteria can offer is preventing transient pathogenic organisms from colonizing the skin surface, either by competing for nutrients, secreting chemicals against them, or stimulating the skin's immune system. However, resident microbes can cause skin diseases and enter the blood system, creating life-threatening diseases, particularly in immunosuppressed people. Magnification: x3000 when printed at 10cm wide.

“I find the study inspiring, something we couldn’t even imagine in the early 1980s,” says Norman Pace, a microbiologist at the University of Colorado in Boulder who wasn’t involved with the new work. Pace has done groundbreaking research with ribosomal RNA (rRNA) to discover new microbes in hot springs and other extreme environments. The new work, he says, “uses thoroughly modern technology” to get samples of previously identified, but uncultured, species.

The flood of putative new microbes comes from DNA sequencing studies that can isolate a single bacterium, or, at the other extreme, look at all the genetic material in a contained environment such as the human mouth. But researchers’ inability to culture these microbes has hampered efforts to validate their existence and clarify what role they play in their respective microbiomes. The human gut, in particular, has as many as 1000 microbial species; but sequences cannot explain whether they contribute to digestion, immune responses, metabolism of drugs, or other processes. “There’s only so much microbiology you can do on the computer,” says Mircea Podar, who studies evolutionary microbial genomics at Oak Ridge National Laboratory in Tennessee and led the new work.

Podar and co-workers targeted Saccharibacteria, mainly mouth-dwelling bacteria of which nearly a dozen species live in humans. But because they make up such a tiny portion of the mouth’s microbiome—less than 1%—they are difficult to isolate and grow.

Podar’s team used an antibody-based strategy to obtain isolates of Saccharibacteria that had been sequenced—but not cultured—from a gamish of saliva and other mouth fluids. They first searched for genes in different Saccharibacteria DNA that likely coded for proteins capable of jutting through the surfaces of cells. The immune system produces antibodies in response to the portions of cell surface proteins it can “see.”

A comparison with other bacteria allowed the researchers to identify specific regions of the surface proteins that would likely trigger the strongest antibody responses. After injecting these protein fragments into rabbits, they purified and fluorescently labeled the antibodies the animals made. Mixing the labeled antibodies with fluids from people’s mouths allowed the researchers to pluck out the relatively rare Saccharibacteria from the mix of cells in the samples. They then placed these bacteria in a wide variety of laboratory media—which essentially are broths made from body organs, sugars, soy, vitamins, and gastric juices—eventually finding concoctions that, for unknown reasons, allowed them to grow.

The researchers write that their reverse genomics technique “should be broadly applicable to any target organisms,” letting them isolate and grow previously uncultivable microorganisms, they report today in Nature Biotechnology. Podar says the new technique will lead to the testing of predictions and hypotheses that investigators cannot do with sequences alone.

Podar notes that a critical roadblock to culturing many microbes is that no one knows which other organisms may inhibit or stimulate their growth. “Once you separate your target organisms, then you can explore conditions under which your microbe can flourish,” he says, noting that researchers can now investigate how these bacteria interact with other residents of their microbiomes. “Genomics by itself cannot do this.”

Although other groups recently have reported other techniques that isolate and grow novel microbes starting from sequences, Slava Epstein, a microbiologist at Northeastern University in Boston who specializes in cultivating previously uncultivable organisms, says this new work stands apart. “Their approach is targeted, and all the others rely on statistics,” Epstein says. “That’s a new development in principle. And it works.”

Epstein says he’s eager to try the technique in his own lab. “It opens up an intellectually teasing question: What is it that makes unculturables unculturable?” Epstein says his group has a potential answer, though he does not want to elaborate. “This could be a useful tool to get more species to prove my theory.”