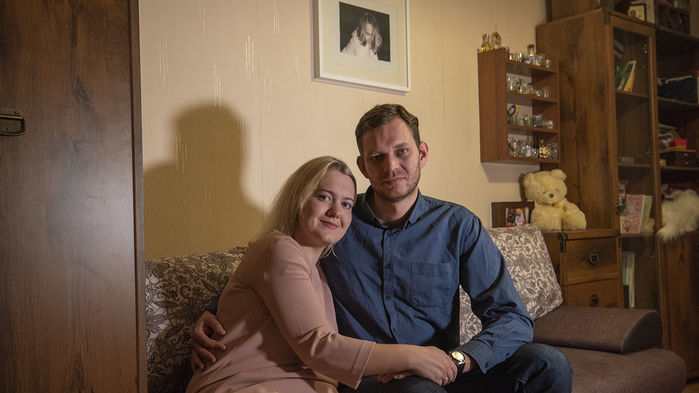 “Yevgenievna” and her husband in their apartment. She has been deaf since birth and her husband has limited hearing.  She is considering allowing an experiment by Rebrikov to edit gene’s in her offspring’s embryo that may help avoid hearing loss.  Credit: Sergey Ponomarev

This story was supported by the Pulitzer Center.

On a lightly snowing Sunday evening, a potential participant in Denis Rebrikov’s controversial plans to create gene-edited babies meets with me at a restaurant in a Moscow suburb. She does not want to be identified beyond her patronymic, Yevgenievna. We sit at a corner table in an empty upstairs section of the restaurant while live Georgian music plays downstairs. Yevgenievna, in her late 20s, cannot hear it—or any music. She has been deaf since birth. But with the help of a hearing aid that’s linked to a wireless microphone, which she places on the table, she can hear some sounds, and she is adept at reading lips. She speaks to me primarily in Russian, through a translator, but she is also conversant in English.

Yevgenievna and her husband, who is partially deaf, want to have children who will not inherit hearing problems. There is nothing illicit about our discussion: Russia has no clear regulations prohibiting Rebrikov’s plan to correct the deafness mutation in an in vitro fertilization (IVF) embryo. But Yevgenievna is uneasy about publicity. “We were told if we become the first couple to do this experiment we’ll become famous, and HBO already tried to reach me,” Yevgenievna says. “I don’t want to be well known like an actor and have people bother me.” She is also deeply ambivalent about the procedure itself, a pioneering and potentially risky use of the CRISPR genome editor.

The couple met on vk.com, a Russian Facebook of sorts, in a chat room for people who are hearing impaired. Her husband could hear until he was 15 years old, and still gets by with hearing aids. They have a daughter—Yevgenievna asks me not to reveal her age—who failed a hearing test at birth. Doctors initially believed it was likely a temporary problem produced by having a cesarean section, but 1 month later, her parents took her to a specialized hearing clinic. “We were told our daughter had zero hearing,” Yevgenievna says. “I was shocked, and we cried.”

Their daughter could have received a cochlear implant, an electronic device that uses surgically implanted electrodes to directly stimulate the auditory nerve. People with such implants can understand speech, but typically can’t hear music. But Yevgenievna and her husband weren’t interested in the device for their child because friends in the Russian deaf community had bad experiences with it—likely because they didn’t receive the proper rehabilitation after the surgery to deal with flood of new signals to the brain.

Later, they learned the cause of their daughter’s hearing loss was genetic. Testing showed she had the same mutation in both of her copies of a gene called GJB2. The mutation, known as 35delG, is one of the most common genetic causes of hearing loss. People homozygous for 35delG, like Yevgenievna’s daughter, will inevitably have hearing loss, albeit to varying degrees. At the time, neither parent had ever had their genes tested—or even thought they had inherited their hearing problems.

This summer, Yevgenievna decided that despite her reservations about cochlear implants, she wanted one for herself. Through the hearing specialist she found, she learned of a genetic study of deaf couples who wanted to have children. This led the couple to Rebrikov, who offered to test not just for their GJB2 gene status, but their entire genomes. To their surprise, in August, they learned they are both also 35delG homozygous, indicating their daughter had inherited the mutations, rather than having new ones.

If either Yevgenievna or her husband had a normal copy of GJB2, a fertility clinic could have created embryos by IVF and tested a few cells in each one to select a heterozygote—which would have normal hearing—to implant. “We were told the only option [to have a hearing child] would be to edit an IVF embryo at the genome level,” she says.

Yevgenievna says Rebrikov explained how CRISPR editing works and some of the risks. She says she understands concerns such as mosaicism, in which an edit might fail to correct the deafness mutation in all cells of an embryo, and off-target editing, which could create potentially dangerous mutations. Those summer discussions left her “both for and against the experiment,” she says, noting that her husband was convinced it was a good idea. “We were amazed by the new technology. It’s like a miracle that you can have a child who has hearing when you cannot hear, and we were impressed by this wondrous possibility.” But then she consulted hearing specialists. “Many told me that me it’s better to have a deaf child and an implant rather than a genetically modified baby.”

Yevgenievna’s husband is now willing to take the risk. “If I said yes today, he’d say, ‘Yes, let’s do it,’” she says, noting that “he greatly supports Rebrikov and his activities.” But he is leaving the decision to Yevgenievna, who in addition to her own reservations would only participate in Rebrikov’s study if Russian regulators approve his proposal.

On top of her doubts about whether genome editing is a better alternative than a cochlear implant, Yevgenievna is not certain she wants a second child. She has not even agreed to the ovarian stimulation with hormones that would allow doctors to harvest multiple eggs, the first step in the protocol. “Which is better: to hear music or be suffering from cancer?” she asks. “That’s the question.” With an implant, “the child may not hear music but will have a happy life and travel and see the world.”

One week after the restaurant meeting, Yevgenievna had her own cochlear implant surgery, and a few days later, she wrote in an email that she and her husband often discuss “the opportunity” offered by Rebrikov.

“I believe one should come to this as confidently as I decided on a cochlear implant,” she says. “It is worth noting that 2 years ago I was an ardent opponent of the cochlear implant, but when I learned more, I changed my mind, and I am happy that I decided to take this step. The same is true with Rebrikov’s experiment. Time will tell.”