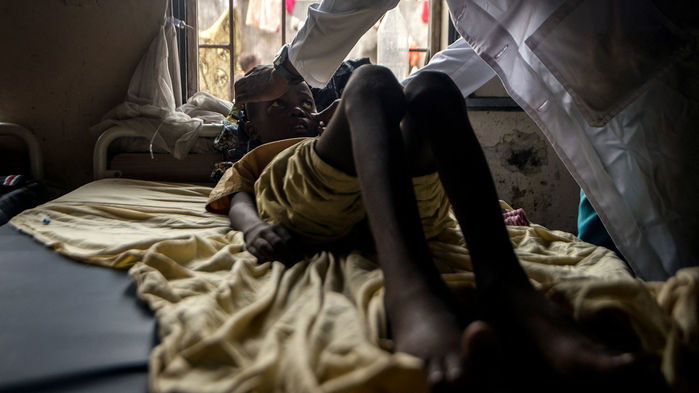 Two major U.S. biomedical research funders plan to each put at least $100 million over 4 years toward bringing cutting-edge, gene-based treatments to a part of the world that often struggles to provide access to even basic medicines: sub-Saharan Africa. The National Institutes of Health (NIH) and the Bill & Melinda Gates Foundation today announced the unusual collaboration to launch clinical trials for gene-based cures for HIV and sickle cell disease within the region in the coming decade.

The ambitious goal is to steer clear of expensive, logistically impractical strategies that require stem cell transplantation, and instead develop simpler, affordable ways of delivering genes or gene-editing drugs that can cure these diseases. “Yes, this is audacious,” NIH Director Francis Collins said during a press teleconference this morning on the project. “But if we don’t put our best minds, resources, and visions together right now, we would not live up to our mandate to bring the best science to those who are suffering.”

After decades of work and setbacks, the traditional gene therapy approach of delivering DNA into the body to replace a defective gene or boost a protein’s production is now reaching the clinic for several diseases, including inherited blindness, neuromuscular disease, and leukemia. Animal studies and some clinical trials have suggested that two diseases prevalent in Africa, HIV and sickle cell disease, can be treated by gene therapies or newer genome-editing tools such as CRISPR.

But in most cases, introducing those therapeutic genes or the components of a genome editor involves removing stem cells from the body, adding or modifying genes, then reinfusing the cells back into the body. That is essentially a stem cell transplant with one’s own cells, an expensive procedure that is also typically risky because physicians wipe out a patient’s existing stem cells with chemotherapy so the corrected cells can engraft and grow. It remains out of reach for most people in sub-Saharan Africa, where few places have the medical infrastructure to support such intensive interventions.

Yet sub-Saharan Africa is home to about two-thirds of the 20 million people with sickle cell disease and the 38 million living with HIV. The NIH-Gates partnership “is an incredible opportunity to find new therapies and possible cures for two diseases that affect millions of Africans and to make them available at affordable costs,” said Matshidiso Moeti, who heads the Regional Office for Africa at the World Health Organization.

Anthony Fauci, director of NIH’s National Institute of Allergy and Infectious Diseases, noted that if this collaboration pans out, it could also lead to enormous cost savings. “If we do successfully achieve an HIV cure, it will ultimately be important not only for millions of individuals with HIV, but also will save hundreds of billions of dollars in health care costs,” said Fauci, whose institute already funds a major HIV cure initiative.

In sickle cell disease, which involves a defect in the oxygen-carrying hemoglobin in red blood cells, several ongoing gene therapy and gene-editing clinical trials in the United States and Europe are either adding a new hemoglobin gene to cells or turning on the gene for a fetal form of the protein. Other clinical trials for HIV have used CRISPR or other genome editors in stem cells to cripple a receptor, CCR5, that the virus depends on to establish infection.

Instead of modifying a person’s stem cells and transplanting them back, the new collaboration will seek to ferry a therapeutic gene or gene-editing tools directly into the body (in vivo) with “vectors” such as harmless viruses or nanoparticles, Collins said. The treatment itself would be similar to a simple blood transfusion. Although studies are already underway with viral vectors that deliver new genes to certain tissues in people, in vivo gene therapy has only been used to modify blood stem cells in animal models of certain diseases. Figuring out how to home in on and modify those cells in people “is a big part” of the collaboration’s plan, Collins said.

Hematologist Alexis Thompson of the Northwestern University Feinberg School of Medicine in Chicago, Illinois, who is involved with some sickle cell gene therapy trials, calls the NIH-Gates collaboration “phenomenal.” But, she says, a more urgent need is to expand efforts to screen newborns in Africa for sickle cell disease and treat them with antibiotics; at the moment, the majority die before age 5 from bacterial infections because the sickled cells impair the spleen’s ability to filter bacteria and make antibodies. Unless more children with sickle cell disease mutations survive longer, there will be few to be cured with the new gene-based treatments, Thompson says. “It’s almost being able to crawl or walk before you sprint.” (Gates and NIH say they plan to support screening efforts outside of the new collaboration.)

For HIV, a big impetus for the cure push builds on two people infected with the AIDS virus who were cured with stem cell transplants. These two men each had blood cancers that required the transplants, which intentionally used blood from donors who had white blood cells with crippled CCR5 receptors. After the transplants, whatever HIV remained in these men could not enter new host cells, and their infections petered out. This new initiative hopes to speed development of direct injections of gene editor components that can target the CCR5 gene in blood cells and cripple it. “The potential beauty of in vivo gene editing is that it might be given ultimately as a single shot, curing everyone in a scalable manner,” says Steven Deeks, a leading HIV cure researcher at the University of California, San Francisco.

The collaboration will also try to speed development of more experimental interventions that directly excise HIV’s genetic material from a patient’s cells or allow people to artificially make superpotent antibodies against the virus. “This might be science fiction now, but one day may be a real possibility,” Deeks says.