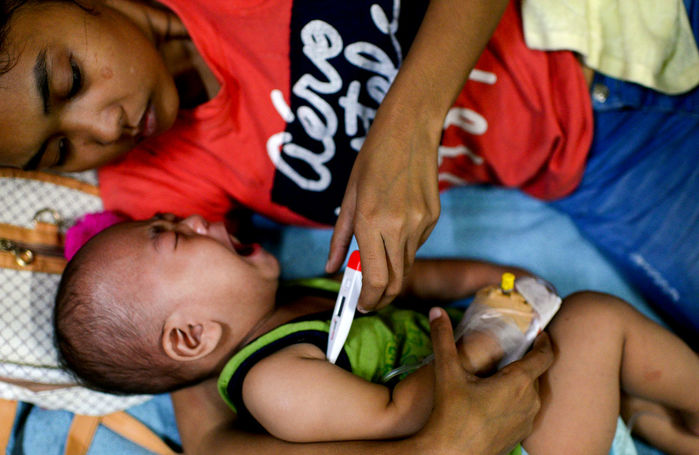 An experimental dengue vaccine has shown promising early results in a large, multicountry trial, but critical questions remain about its effectiveness and safety. Still unclear, for example, is whether the vaccine—which had an efficacy of 80.2% in the study—might increase disease severity in some recipients, as happened with a dengue vaccine given to 1 million children in the Philippines before the problem became clear in 2017.

Dengue virus, which is transmitted to humans by mosquitoes, infects about 390 million people each year, and the disease is rapidly increasing its reach around the world. Although it typically causes flulike symptoms or none at all, severe cases can lead to hemorrhagic fever, shock, and even death. So even less-than-ideal vaccines “can still have a public health impact,” says Derek Wallace, a clinician who heads the R&D project at pharmaceutical company Takeda in Cambridge, Massachusetts.

To test their new vaccine, which is based on a weakened strain of the dengue virus, Wallace and colleagues randomly distributed it or a placebo to 20,000 children, aged 4 to 16, in eight countries across Asia and Latin America, where the disease is endemic. Twelve months after participants received their second and final dose, the researchers compared how many people in the placebo and vaccine groups developed confirmed cases of infection with any of the four different strains, or serotypes, of dengue virus.

The vaccine had 97.7% efficacy against the dengue 2 serotype, the team reports today in The New England Journal of Medicine (NEJM). That figure dropped to 73.7% for serotype 1 and 62.3% for serotype 3; there were too few infections with serotype 4 to reach any conclusions.

In participants who had confirmed dengue infections, the vaccine reduced the risk of hospitalization by 95.4%. “The results are very encouraging,” says Jeremy Farrar, head of the Wellcome Trust biomedical charity in London, who is a dengue researcher.

The new vaccine’s strong protection against serotype 2 is no surprise, says In-Kyu Yoon, a dengue vaccine specialist in Bethesda, Maryland, who is a senior adviser to the International Vaccine Institute and who served on a neutral advisory board for Takeda. That’s because the “backbone” of the vaccine is a harmless version of dengue virus serotype 2. A few genes from the other three serotypes have been put into the virus to create the “tetravalent” vaccine.

Farrar stresses that the clinical trial must be evaluated for a longer period to better assess the vaccine’s safety and durability. Farrar co-chaired a working group that advised the World Health Organization about its recommendations for the problematic earlier dengue vaccine, Dengvaxia, which is made by Sanofi. It took 3 years for clinical trials to reveal convincing evidence of serious problems with Dengvaxia, and Farrar notes that many complex variables make it difficult to sort out vaccine-induced immunity from protection provided by a natural infection with the virus. Takeda’s trial plans to follow vaccinees for 4.5 years after their last shots.

One of the peculiarities of dengue is that people who develop protective antibodies to only one serotype are more at risk of severe disease if they become infected by one of the other three types. Paradoxically, the antibody against the initial serotype sometimes does nothing to stop the second virus and actually speeds the infection process.

Scott Halstead, a dengue researcher who came up with this “antibody enhancement” theory, long warned that the Sanofi vaccine might trigger more severe disease if given to children who had never had a dengue virus infection. It is these initially so-called seronegative children who eventually were found to have increased rates of hospitalization if they received Dengvaxia.

Sanofi, which still sells its vaccine in some countries, questions whether the enhancement mechanism explains the increased risk seen in seronegatives. Wallace says that although enhancement is a good explanation for a natural phenomenon, “how that applies to a vaccine is still to be determined.”

Unlike Sanofi’s efficacy trials of Dengvaxia, Takeda assessed, prevaccination, whether participants in its study had antibodies from a previous dengue infection. About one in four participants were seronegative, and although no obvious signs of vaccine-induced harm occurred, the NEJM paper notes the overall vaccine efficacy in this group dropped to 74.9%. What’s more, the vaccine offered no dengue protection against serotype 3 to these people—for unknown reasons.

Leonila Dans, a pediatrician at the University of the Philippines in Manila who was highly critical of her government for rushing Dengvaxia into widespread use, notes the Takeda results look “very similar … albeit better.” But she doesn’t want to see history repeat itself. “We still need to wait for the full trial report to see if the efficacy persists and safety is assured,” Dans says. “Ideally we want a vaccine that will be protective for all serotypes.”

Takeda also has data from 18 months after the last vaccination, which it plans to present on 23 November at the annual meeting of the American Society of Tropical Medicine & Hygiene. Wallace says “the data are consistent” with the NEJM findings, and the company plans to soon seek regulatory approval in affected countries. Just this week, Takeda opened a new plant in Singen, Germany, to manufacture the vaccine.

Yoon says regulators and public health officials have the difficult task of weighing the risks and benefits of any dengue vaccine against an increasing global burden of disease. “What’s the likelihood of a perfect vaccine?” Yoon asks. “Clearly the Takeda vaccine is not going to be perfect. But the question is: Are the data sufficient to favor using it? It’s not a straightforward question. And it’s influenced by the Sanofi experience.”