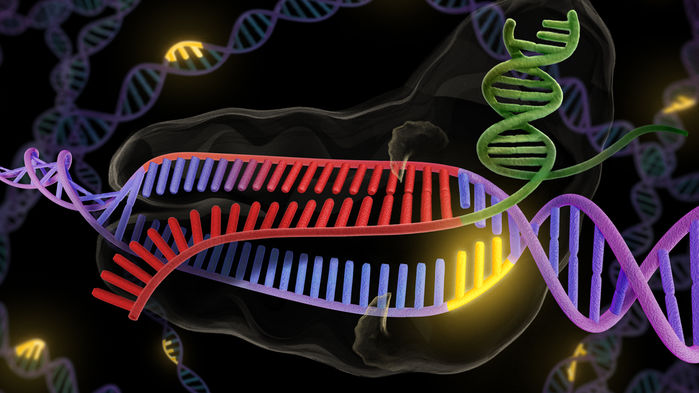 The genome editor CRISPR cuts DNA with help from a guide RNA (green and red) and a Cas9 enzyme (outline) that latches onto a three-base sequence (yellow). KC ROEYER/UNIVERSITY OF CALIFORNIA, BERKELEY

You wouldn’t know it from the excitement generated by the revolutionary genome editing method known as CRISPR, but as practiced now, it is far from perfect. Its standard components can find and cut DNA in only a limited fraction of the genome, and its molecular scissors are wobbly, leading to “off-target” mutations. Many groups are trying to do better, and now, a team led by chemist David Liu at Harvard University has engineered a version of CRISPR that potentially is both more dexterous and more precise.

“This is very impressive and important work,” says CRISPR pioneer Erik Sontheimer of the University of Massachusetts Medical School in Worcester.

CRISPR comes in many flavors, but they all depend on a guide molecule composed of RNA to carry a DNA-cutting enzyme—the most commonly used one is known by the shorthand Cas9—to a specific stretch of the genome. This complex, however, homes in on DNA landing pads that have specific molecular features. The enzyme in the standard CRISPR toolkit, called spCas9 for its natural source, the bacterium Streptococcus pyogenes, can only land on genome segments that have at one end a specific three-base trio: N, where N is any of DNA’s four bases, followed by two guanines (Gs). Only about one-sixteenth of the 3.2-billion-base human genome has the right sequence. “That’s been a real limitation,” Liu says.

The new work, reported online in the 28 February issue of Nature, modifies the Cas9 enzyme, creating at least four times as many potential docking sites. In theory, this could allow researchers to, say, cripple or replace many parts of genes associated with human disease that CRISPR currently cannot touch.

Liu’s lab began by engineering a large variety of slightly altered spCas9s. The group then selected for ones that could use a broader range of the 64 possible, three-base landing pads—technically referred to as protospacer adjacent motifs, or PAMs. They’ve dubbed their new enzymes xCas9s, and the best one works with NGN, a sequence that occurs in one-fourth of the genome.

Liu expected that in return for gaining the ability to latch onto more places, xCas9 would pay a penalty: more of the potentially dangerous off-target cuts that concern researchers hoping to unleash CRISPR in medicine. After all, conventional thinking holds that Cas9, naturally part of a bacterial immune strategy, evolved to be as promiscuous in its DNA binding as it could be without compromising specificity. “PAM binding is supposed to be the gatekeeper, and if your gatekeeper is drunk and lets lots of Cas9 into the dance, that should screw up the targeting,” Liu explains. But the opposite happened. “If you ask me for a detailed mechanistic explanation for why that is, my answer is, ‘I don’t know,’” he says.

Stanley Qi, a CRISPR researcher at Stanford University in Palo Alto, California, says this win-win situation is “amazing,” and should excite many labs. “The real test here is if people rush to use this xCas9 while forgetting about the original version,” Qi says. “At least in my lab, we are very eager to try this out for our applications.”

Liu cautions that the standard Cas9 has proved itself over the years; his lab has only tested the new xCas9 on a few dozen sites in the genome so far, compared with the thousands the original has been shown to hit. “I’m not 100% sure xCas9 is going to be flat out better than spCas9,” Liu says. “I want everyone to test it because I want to know the answer.”