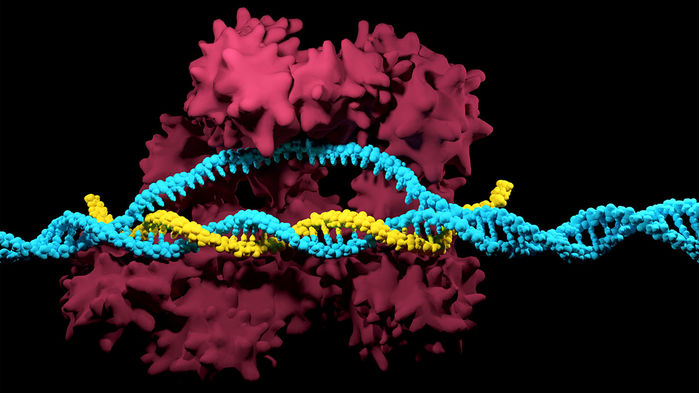 Top CRISPR researchers at two University of California (UC) campuses have teamed up with pharmaceutical giant GlaxoSmithKline (GSK) to form a new laboratory in San Francisco that will exploit the genome editor to screen for new drugs.

Drawing on a GSK commitment of $67 million over 5 years, UC Berkeley’s Jennifer Doudna, a co-inventor of the powerful CRISPR tool, and UC San Francisco’s Jonathan Weissman will select the academic talent to work in the new Laboratory for Genomics Research (LGR). “This is really, for us as academics, kind of a dream come true,” Doudna says.

Although Doudna has already co-founded two CRISPR-related companies and co-runs the Innovative Genomics Institute with Weissman, she says the LGR “takes the not very interesting parts of the screening efforts out of the picture.” A friend who visited her lab a few years ago described it as “artisanal,” she recalls and wondered why they weren’t using more automation. “It was a nice way of saying that it seems really fusty,” Doudna says. She hopes the LGR will allow them to use “genome editing and CRISPR, in particular, as a tool to understand the causes of disease in a way that had really never been possible in the past.”

Weissman, a physicist who morphed into a protein-folding specialist, specializes in using CRISPR to construct large-scale probes of gene functions. “We don’t have the capability, the knowledge, or the resources to develop drugs,” he says. “I’m trying to understand what are the problems that [GSK is] facing and what are the tools that would really solve the problem. As a tool builder, my biggest fear is we build a bridge to nowhere.”

In all, London-based GSK will fund 24 full-time UC researchers—only some of whom will come from Doudna’s and Weissman’s labs. GSK will contribute as many as 14 of its own employees. UC will own the intellectual property (IP) of any new tools invented in the lab, while GSK hopes to patent new drug targets. UC will receive a “financial benefit if a drug that requires licensed IP comes to market,” a GSK spokesperson says, noting that the exact terms are “confidential.”

Hal Barron, GSK’s chief scientific officer, says 90% of genes still have opaque functions. He hopes that by using CRISPR to knock out or turn on genes in cells and animal models, the LGR will be able to double the number of genes with known functions. “Think about the impact of that as being able to develop twice as many drugs,” Barron says.

Other academics who have had similar partnerships said they are useful, but can be tricky. “Overall, the model is great and the [CRISPR] space is ripe for innovation that’s not fundamental biology or chemistry but an engineering problem,” says UC San Francisco’s Jeffrey Bluestone, an immunologist who for the past 9 years has taken part in a collaboration between the school and Pfizer. The challenge, he says, is that there can be a “disconnect” when there’s a discovery about a potential drug that targets a disease not in the company’s portfolio.

The Harvard Stem Cell Institute took part in a collaboration with GSK between 2008 and 2013 to develop new drug targets for regenerative medicine. “It was a really great interaction,” says Harvard stem cell biologist David Scadden, who notes it ended because GSK got out of the regenerative medicine business. “Having academics who are bilingual in terms of understanding how companies have to think as they develop products is a good thing,” he says.

The lab, located at UC San Francisco’s Mission Bay campus, is already up and running.